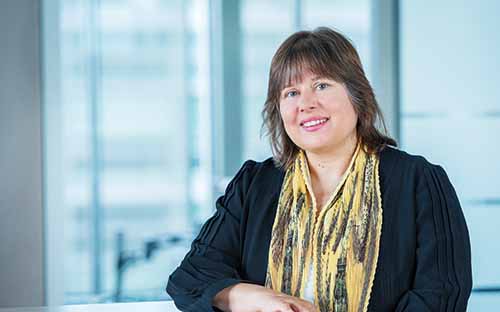 Since taking up the chair of the Association of the Luxembourg Fund Industry (Alfi) in June, the past eight months have been especially busy for Corrine Lamesch.

Top of her in-tray has been the push towards more sustainable finance, the Pan-European Personal Pension Product (PEPP) and the growth of the alternative investment sector.

The three topics, which Lamesch says will be her priority for her first year in office, are also given prominence in Alfi’s recently published strategy document for the five-year period to 2025, which includes a commitment to digital transformation as well as making a “positive impact for investors through inclusion, regulatory and policy engagement and investor education”.

A lawyer by training, the 48-year-old replaced the widely respected Denise Voss of Franklin Templeton, who held the post for the maximum term of four years.

Lamesch has worked in the Luxembourg offices of the City law firms Clifford Chance and Allen & Overy and for the past 11 years has worked at $339.2 billion Fidelity International, where she is currently country head for Luxembourg and head of legal affairs.

Over lunch (mixed salad, followed by poussin, no wine) at the airy Spring restaurant in London’s Somerset House, Lamesch tell me that her main role will be to chair Alfi’s board meetings, but she is also expected “to be the face and voice of the association”.

Lamesch will continue to hold down her job at Fidelity on a part-time basis. Just over half her time, she estimates, will be devoted to Alfi – although there will be some weeks, particularly when travelling abroad, when she will be virtually full-time.

The events are also an opportunity to promote the Ucits and alternative investment fund (AIF) brands. The latter in particular, she says, is increasingly gaining traction outside Europe.

Other aspects of the job include chairing Alfi conferences as well as being involved in the local Luxembourg fund community and various investor education initiatives. It also involves being the public face of the association when talking, for example, to bodies such as the Luxembourg finance ministry and regulator.

“All in all, it is a multi-faceted role and I enjoy being there to represent our industry in front of all these stakeholders,” she says.

“But it only covers a small part of the investment universe, covering only the E of ESG, and so more needs to be done in coming up with harmonised standards,” she adds. “But you need to start somewhere and I think the E was the sector where it is maybe the easiest to measure impact.

“We definitely need guidance from public bodies on common definitions on what is sustainable, and we need that in Europe, but we also need common standards around the globe because otherwise it will be difficult to adhere to different standards in different countries.”

As the demography of Europe changes and as the European workforce becomes increasingly mobile, Lamesch and Alfi are also eyeing up the business opportunities of the PEPP, on which the EU agreed legislation last year. This will allow workers to contribute towards a personal pension from whichever EU country they happen to be in, without having to set up a new scheme each time they change countries.

“As the population changes, we are looking at how the fund industry can be more active in helping employees to save for their pensions in the long term,” she says. “If the fund industry is able to help set up this kind of portable pension product, which could be sold on a cross-border basis, that will be a great opportunity for the industry.”

She adds: “We are a long way from launching products on the market, but Luxembourg undoubtedly has expertise in the cross-border distribution of products and we are well placed to set up these products. It’s at an early stage but it is a very exciting project.”

On the subject of Brexit, Lamesch says that, because of pre-emptive planning since the UK referendum, the Luxembourg fund industry is well placed to deal with any potential scenario that could arise if barriers to cross-border trading are erected.

“We don’t see any immediate threats to the industry and it will not make a big difference in the short term as asset managers started to put back-up plans into place some time ago,” she says.

Luxembourg is one of the financial centres in Europe that is best placed to benefit from Brexit as asset managers in the UK, no longer able to produce Ucits products or passport their products into the EU, increasingly move jobs away from the City of London.

So far, about 60 financial services firms, half of them asset managers, have publicly announced that they have moved some of their activities to Luxembourg, but Lamesch says there is currently no data on how many staff have moved to the grand duchy.

“The asset management industry is, in general, still growing in Luxembourg but it is too soon at this stage to know how many jobs have moved here because of Brexit.”

Lamesch points out that other firms have also, in all probability, moved jobs to Luxembourg but decided to “move quietly” without making any official announcement.

“I think we are quite well prepared for Brexit, but of course we don’t know what is going to happen and what the future relationship is going to be,” Lamesch says.

“But it appears financial services are not going to be at the top of the agenda, at least for the UK. If that is the case, what we need to work with is the current arrangements for our industry whereby we continue to use the delegation model around the globe.

“We would hope that the regulatory rules stay as close as possible and that there will be equivalence, as this would allow our industry to continue to work as it has been working for more than 30 years.”

So, what of her life outside work? A committed mycophile, one of Lamesch’s favourite hobbies in the late summer and autumn is hunting for mushrooms in Luxembourg’s numerous hilly forests.

“I love strolling in the woods and coming back with porcini, chanterelle and girolles mushrooms,” she says, with infectious enthusiasm.

In the winter, she is often to be seen on the ski slopes of the exclusive alpine resort of Haute Nendaz in the Swiss canton of Valais. “I am a passionate skier and I love the mountains,” she says. “I also love ski touring away from crowds, through forests and nature. I also go there in the summer for hiking and mountain biking.”