Behind the hullabaloo of its Ucits industry and the emerging AIFMD sector, Luxembourg is building a third 'pillar' based on responsible investment. Nick Fitzpatrick reports.

Two decades ago food was food and people gave little thought for its provenance. Several food scandals later, though, and organic produce has leapt from specialist shops and into the supermarkets. Consumers have made clear their concern about food contents and production.

Some people in the Luxembourg funds industry believe responsible investment funds are subject to a similar impulse.

“Ten years ago people were less careful about what they ate. But then came the food scandals and people started being bothered. I think responsible investment will go through the same pattern,” says Thomas Seale, chairman of LuxFlag, which labels investment funds based on certain responsible criteria.

A fund equivalent of a food scandal was illustrated most recently when the UK’s Archbishop of Canterbury criticised a money lender, Wonga, for the effect its interest rates have on poorer people in financial straits, only to realise the Church of England he heads had indirect fund investments in it.

There are numerous other real and potential examples, of course, where institutions could trip up over their beliefs about environmental, social and governance (ESG) issues, like recycling and poor workplace safety standards.

But as the responsible investment business evolves from its early days of ethical screening, it is turning into a credible risk management tool that could bring a wholesomeness to many funds and Luxembourg seeks to be towards the front of this trend.

PERFECT COUPLING
Responsible investment and organic food sit well in the same sentence. Both attempt to do good things, avoid bad, and still offer sensuality to the end user.

But should a similarly perfect coupling exist between responsible investment funds and Luxembourg?

Apart from the obvious credibility, the Grand Duchy has, by the mere fact of having a large funds processing industry, the Luxembourg state also appears philosophically disposed to lend its support to the responsible investment idea. Seale points out Luxembourg is one of a small number of countries to pledge 0.7% of GNP to foreign aid.

Nordic countries form the majority of this club’s other members and they clearly have fervour for responsible investment.

Fund managers from the region, such as Denmark’s Sparinvest and Sweden’s Nordea, have funds in Luxembourg that employ some form of responsible investment approach.

And if you believe in stereotypes, a further boon is the high number of Germans among Luxembourg’s fund workforce. Why? Probably one of the most ecologically minded of the west European nations, it is joked that Germans need four recycling bins just to recycle different parts of a tea bag. 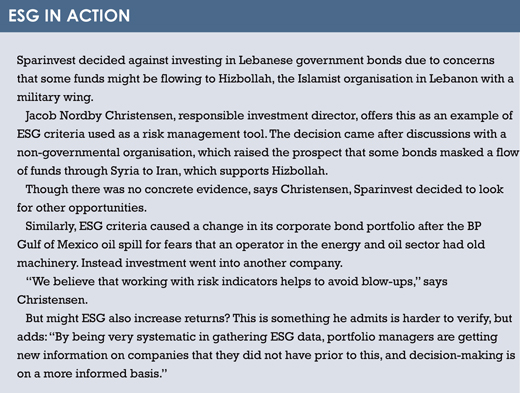 Responsible investment funds get roughly 10% of the Luxembourg industry’s attention. The other 90% is spent on funds falling under the Ucits and alternative investment directives. Together, responsible investing, Ucits and alternatives officially form the “three pillars” of the industry’s future development. Luxembourg currently has the largest market share of ESG funds, for example, at 23% of fund, though is second to France in terms of assets, according to official figures.

“Responsible investment is small but assets are growing and there are more and more players interested in it and more and more investors,” says Anouk Agnes, deputy director general of the Association of the Luxembourg Fund Industry (Alfi).

WHAT IT SAYS ON THE PACKET
Although the integrity of food labelling might be debatable, over the years consumers have demanded more information and transparency about their food. Producers see value in labels offering assurance.

Seale, who is also the chief executive of European Fund Administration, a third-party service provider, says a fund manger’s customers also want assurances that a fund that claims to be steered by responsible investment aims, really is.

LuxFlag is seeking to launch an ESG label to compliment its existing two labels for microfinance and environmental funds.

The idea is to bring credibility to responsible investment funds through transparency.

The LuxFlag labelling initiative is an important to Luxembourg becoming an internationally recognised hub for responsible investment. If successful, Luxembourg could potentially host funds not just catering for western sensibilities, but also Islamic funds.

Seale says LuxFlag, which was created in 2006, has issued 35 microfinance and environmental labels. Initially a fund is audited and the findings are considered by a LuxFlag committee.

LuxFlag has refused labels to some funds, says Seale. “If we refuse a label, it might be because a fund doesn’t have a high enough percentage of investments in microfinance or environmental technology.”

In the environmental universe, the review process, which has quantitative and qualitative elements, should filter out funds that have been “greenwashed”.

“Greenwashing exists and it shows that there is a role for standards, definitions and labels in this area. But we give a view up front about eligibility. We do not want people to go through the process and be disappointed.”

Who, though, decides what the threshhold of eligibility is in the first place? For example, an environmental label requires at least 70% of investments to be in environmental technology, like water desalination plant.

Not only that, but agreeing on what is ethical in the ESG area, can be difficult. 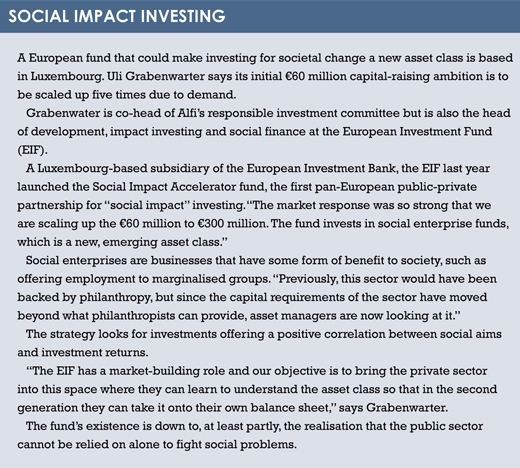 Uli Grabenwarter, co-chair of Alfi’s responsible investment committee, says: “In the asset management industry it boils down to transparency. If we cannot satisfy the desire for a definition of exactly what responsible investment is, we can at least create a level of transparency that allows investors and stock holders to make informed decisions.”

Seale, meanwhile, says that issuing labels to a third of funds in the entire potential universe suggests the process has an appropriate level of rigour.

For some fund managers, applying ESG criteria across their entire investments and not just to specialist funds is meant to be more than a quick offering to Gaia, the Earth goddess; it is also a tool of risk management.

THE THREE PILLARS
In Luxembourg, the phrase “blow-up” is used when talking about the potential for an event in a Luxembourg Ucits fund that could damage its reputation abroad. That’s one pillar of the Luxembourg industry that could crumble away; AIFMD and responsible investment are two new ones.

Hopefully for Luxembourg, a steady flow of Germans will keep the responsible investment pillar standing.