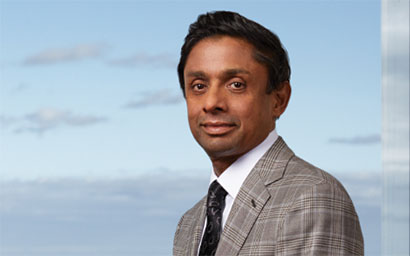 Arup Datta, head of the quantitative equity team at Mackenzie Investments, talks about why quant is suitable for emerging market investing, despite the challenge of volatility.

Navigating emerging market volatility is tough for data-driven quant strategies, with the metrics subject to change at any given moment. This is why the human touch can prove crucial for generating alpha, says Arup Datta.

Datta is head of the quant equity team at Mackenzie Investments, one of Canada’s largest fund managers with $105 billion (€94.2 billion) in assets under management as of the end of the first quarter this year. The firm currently has five emerging market quant strategies – all of which are spearheaded by Datta.

Adding a human overlay to the investment process ensures the data feeding the strategies is clean. This avoids what Datta calls the “garbage in, garbage out phenomenon”.

Emerging markets have had their ups and downs over the last few years. In 2018, there were two negative catalysts working against them – the US raising interest rates and the ongoing US/China tariff war, according to Datta. “The latter is maybe holding back emerging markets at the moment,” he says.

Trade tensions come in ebbs and flows. Although the quant equity veteran admits he has no “crystal ball” to see how the future of Sino-American relations will pan out, he is confident the tariff tit-for-tat cannot last forever, stating that “people need to coexist”. Its unpredictability, however, can be hard to manoeuvre, yet his team fares well.

“This month [May] we’re navigating the latest pick-up in the tariff controversy better, but that’s not always the case. It depends on the environment – that’s why I like to have a diversified number of stocks balanced between growth, value and quality. Ultimately if you pick good stocks, they have catalysts in place. Some of these may get affected by tariffs and things like that in the short term. That’s why there is the human element,” Datta says. Despite volatility caused by tensions between the US and China, April was one of his team’s best-performing months in terms of alpha.

Breadth of coverage
Datta has been in quant investing since 1992 and has worked on quant equity strategies across the globe. He believes emerging markets are a “sweet spot” for quantitative equity investing. What makes quant methods stand out, he says, is the sheer breadth of their coverage. Computer models programmed and levered by his team currently cover 6,000 emerging market stocks.

Even the most seasoned fundamental equity analysts could handle, at best, around 40 stocks each, says Datta. “Do the math and you need hundreds of analysts to cover so many names in emerging markets,” he says.

“In areas where there’s more breadth of names, more diversity, like emerging markets or European small-cap, it plays more into a quant strength.”

Identifying a key market often comes down to past experience. “I like to run regional strategies where there’s demand – and where historically, quantitative managers have added value, myself included,” he explains.

Mackenzie’s global quantitative equity team now has a focus on developed markets. They have a view to setting up strategies in Europe in the near future, as well as in the US, adding to their quant range. “Europe and emerging markets are areas that, historically, quantitative processes have been good for,” says Datta.

He is no stranger to quant strategies. Indeed, fundamental quant processes is all he has done and he partly credits his team’s past success to limiting capacity in emerging markets strategies to a few billion dollars.

In Europe, he’ll employ the capacity constraint – as he does across all his strategies – though competition could be running ten times that, he says.

Datta ranks and trades stocks on a daily basis – his work ethos since he began his career in Boston at what is now Man Numeric. “If you’re ranking stocks every day, there’s different market open hours for emerging markets, Europe, and the US, and all that has to work seamlessly,” he says.

“The idea here is that the world doesn’t stop for you and does not meet you at your rebalancing cycle. The world’s changing every minute. There’s a price moving, there’s new information.”

By rebalancing portfolios daily (as opposed to weekly or monthly), Datta says he can get into a name earlier, or get out faster when it’s on the leg down. This method of trading requires a bigger infrastructure and quant models that work perfectly, but helps him stay ahead of other investors, he says.

“Alpha delivery is what I live for, and that’s not always the easiest thing to do, but it’s what I’m always looking out for. If you can do that, the rest will follow,” he says. “But how do you stay ahead of a lot of good competition?”

A mixed team
The Mackenzie quant team consists of a mix of experienced industry professionals working alongside tech-savvy younger generations.

“You cannot be a quant today unless you know you have a strong team,” says Datta. “Every good quant equity firm has their strong, seasoned people like me and then the younger programmers.”

With programming languages changing every five or six years, his team has to keep its finger on the pulse. “Today, Python’s the rage. Six years from now, I can’t tell you what the rage will be, so you need the people more schooled today,” Datta says.

Interestingly, one of his two children studies machine learning techniques in her high school computer science class. “Even eight years ago this wasn’t the case, so you need the seasoned people working together with younger people.”

Although his team is looking into machine learning, he prefers to be transparent in his quant strategies. “I’m willing to use machine learning so long as I have a reasonable idea of why the machine is doing what it’s saying,” he says. “If it becomes very opaque, I have a tougher time applying those techniques because if it’s opaque and you underperform, the clients will ask why and you won’t have an answer.”