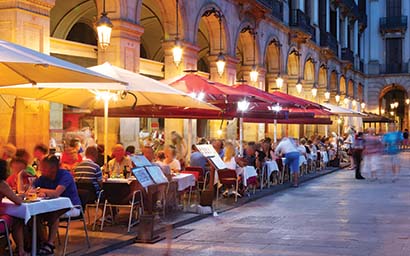 Up until recently, free trade seemed to be a crucial ingredient to the dominant political and economic narrative. After several rounds of trade liberalisation, and with the exception of the immediate aftermath of Lehman Brothers’ collapse in 2008, the world economy enjoyed virtually seven decades of uninterrupted growth in export volumes, with global trade growth outperforming economic growth by nearly a factor of two. But escalated trade tensions have become a more salient source of concern for policy makers and investors alike.

We have looked at the likely macroeconomic costs of increased barriers to trade and their potential consequences for European real estate markets. There are four key takeaways from our research.

Firstly, due to the necessary legislative decoupling and the imposition of tariff and non-tariff barriers on UK and EU goods, the risk posed by a No-Deal Brexit is significantly larger than increased barriers for EU goods destined for the US; the Brexit debate can be fundamentally thought of as a rejection of liberal trade and mobility policies and international integration.

Secondly, the regional and complex nature of supply-chains means that wholesale shifts in production patterns outside of Europe seems unlikely; however, that also implies that losing membership of a closely integrated trading bloc (like the EU) is a paramount risk to the UK. Thirdly, the expected impact of a global trade war, and the corresponding negative impact on US and China growth, are expected to be quantitatively modest in most key European countries and cities, as no outright falls in employment or output are forecast.

Fourthly, city-level impacts are likely to be moderate in size, yet uneven depending on the location at hand. In a No-Deal Brexit and Trade war escalation scenario, UK cities are exposed to a larger shortfall in demand across all three traditional commercial real estate sectors, with the most severe impacts expected to be centred around cities with over-exposure to financial services or car manufacturing.

What does this mean for real estate investors?
We used the past relationships between macroeconomic variables and real estate rents to determine the potential impact of a trade war on the office, logistics and retail sectors in key European cities.

It is perhaps unsurprising that the main UK office markets seem most exposed to the risks posed by escalated trade frictions. That in part reflects their greater exposure to Brexit-related risks. Indeed, London and Bristol face the largest hits to their employment growth rates on a pan-European basis. By comparison, while the expected shortfall in employment growth in Manchester and Birmingham is smaller, these markets have been more sensitive to changes in employment conditions in the past.

At the opposite end of the scale, Paris, Barcelona, Madrid, and Berlin look insulated from trade risks by virtue of their small estimated shortfalls in demand. Meanwhile, Lyon seems the office market least at risk as the expected hit to jobs is amongst the smallest.

As in the office sector, we think the industrial space in the UK looks more exposed to the increase in trade barriers than on the Continent. London, Bristol, and Birmingham are expected to see some of the largest hits to demand, and rents have tended to be moderately sensitive to changes in demand. Continental markets like Berlin, Lyon, and Paris are expected to see some of the least notable decreases in GDP growth as a result of a trade war making them amongst the most insulated to a prolonged global trade war.

The retail sector in the UK looks again comparatively less insulated from trade risks. This in part reflects the fact that a No-Deal Brexit should cut consumer spending via its effect on aggregate demand as well as the hit to consumer spending power expected through a weaker exchange rate and higher inflation. By contrast we do not expect key continental European cities to suffer from a comparable hit to consumer spending growth rates under our trade war scenario, reflecting the limited imported inflation expected as the euro is forecast to appreciate against sterling but remain broadly flat against the dollar and other major currencies. In fact, Barcelona and Madrid are even expected to see a modestly positive boost to consumer spending growth rates even in a trade war scenario given their structural recovery. German cities and Paris are expected to see a modest downgrade in household consumption in our scenario.

Global trade linkages have become more complex and interrelated over the decades. Coupled with the recent increase in protectionist rhetoric, and the momentum gained by protectionist movements in an increased number of European countries and more recently in the EU parliament, the threat of increased barriers to trade to European economies should be on investors’ minds.

However, at the national level, we expect these impacts to be generally modest, and be tied more to the outcome of the Brexit process than to global trade risks such as the imposition of higher auto tariffs on European exports. Looking ahead, there is a latent risk that trade tensions can escalate quite rapidly to encompass an even more restrictive environment. Indeed, President Trump’s latest move to instrumentalise tariffs to address the geopolitical issue of illegal immigration suggests that trade wars could be here to stay. The US and China may be stuck in a cycle of “fighting and talking” for many years before pivoting to a more “rational cooperation”. Investors should thus expect trade frictions to get worse before they get better and consider the above potential regional and property type implications when constructing their real estate portfolios.

Mahdi Mokrane is head of European research and strategy, and Eduardo Gorab is research strategist, GPS, at LaSalle Investment Management