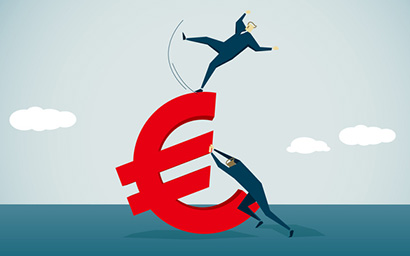 Mario Draghi has been doing “whatever it takes” to save the euro. But managing eurozone equities is still a difficult task. World-leading companies in some sectors can help, finds Nick Fitzpatrick.

In February 2019, Roger Bootle, an economist at Capital Economics, told an audience that Britain had economically outperformed all eurozone countries except Spain since the creation of the euro in 1999 and that Italy in particular had seen “next to no growth” during that time.

Bootle is a pro-Brexit economist and was debating the UK’s departure from the EU at an event held by fund administrator IQ-EQ with Funds Europe’s participation.

In terms of stock market performance, in the ten years to March 31 this year – a decade that spans the financial crisis – the Euro Stoxx 50 index returned 32% on a price basis and 98% on a gross basis. This compares to a 214% return from the S&P 500 on a price basis in dollars.

The last time eurozone stocks had “a good patch” was in the period immediately preceding the financial crisis, or 2004-07, according to Nedialko Nedialkov, a eurozone equity fund manager at Germany’s Union Investment. During that period, the Euro Stoxx 50 returned 57% and 79% on a price and gross basis, respectively, according to Euro Stoxx data.

“Eurozone equity performance is nowhere near the highs from before the financial crisis and the US is almost 100% above it,” he says.

Nedialkov – who manages the UniEuroStoxx 50 fund – has been investing in eurozone equities for the past six years. He points out that the US economy has been growing by 3% annually over the past decade, while the eurozone’s growth has been 2%.

“That’s a significant difference,” he says, adding: “I could not give you short-term respite or hope that the issues affecting the eurozone are going away.”

International sensitivity
The issues Nedialkov is referring to most prominently include the US-China trade wars. This is affecting stocks with exposure to international trade, which is a significant factor for the eurozone – unlike in the US, where performance is more domestically driven and where better growth has helped the main stock index set new record highs recently. A Bank of America Merrill Lynch (BoAML) report noted that European stocks are the most sensitive to global trade conditions and that the past 12 months of escalating tariffs had damaged European business confidence, which is now at cycle lows in Germany.

Along with the question of tariffs, there are risks that stem from the rise of anti-euro populism, and from the European Central Bank (ECB) stimulus measures that entail the winding down of quantitative easing.

“I do not have amazingly positive news on the macro side that things will improve, but I believe there is value and some good things in the eurozone. There are always sectors and stocks that are well positioned,” says Nedialkov.

So, what is a fund manager that focuses on eurozone and wider Europe ex-UK stocks supposed to do at this stage?

The eurozone is in the late stage of the economic cycle, as evidenced by the better performance of the consumer sector over the past year. Adidas, with a fivefold increase in stock price since 2015, is an “amazing story”, helped by its strong brand and management change, he says. But consumer stocks are late-cycle businesses.

In his eurozone fund, which invests €1.4 billion in 43 stocks, Nedialkov is investing in companies that are benefiting from long-term secular trends, such as an ageing population and the swinging pendulum of wealth towards emerging markets. In some segments, the eurozone-based companies riding these trends are world leaders, he says.

He cites French-Italian EssilorLuxottica, a lenses and eyewear company. “It has good management and good positioning globally with the potential for strong growth ahead, as eyesight gradually worsens in the global population due to ageing. It will also benefit from the fact that more people in the emerging markets can afford glasses.”

Navigating funds on a stock-by-stock basis depending on the strength of each stock’s link with long-term trends is one way some fund managers are pushing against the headwinds affecting eurozone or eurozone-heavy equity funds.

Some of them will be tapping into the ‘quality’ factor, which tends to perform better in a late-cycle or recessionary environment. European markets generally do better when the ‘value’ factor is strong, but value has been struggling, says David Holohan, senior equity investment strategist at Mediolanum Asset Management. At this time, therefore, the firm’s European portfolio is orientated towards quality names. From the broader European universe, he cites UK drinks manufacturer Diageo and Swiss food and drinks business Nestlé.

Some quality names are up more than 20% this year, he says. The firm likes consumer staples and, again with reference to secular trends such demographics, it also likes healthcare and is underweight banks. “European equities need to have good visibility on trade for the banks to do well,” Holohan says.

Banks are a drag for the eurozone. Here, the main indices are overweight in this sector while also being underweight in the sector that has most contributed to America’s bull market, namely technology.

Union’s Nedialkov says: “Euro Stoxx big sectors are not en vogue. There are a lot of utilities and banks in there, things that have not been running so well, while the US has a lot of tech.”

Sweden’s Spotify, one of the world’s most recognisable tech giants, is listed in the US. However, Nedialkov expresses interest in German-listed Delivery Hero, an online food delivery business, and Amadeus IT Group, a travel-booking tech firm whose parent is listed in Spain.

“Europe has not had the investment that helps these kind of tech companies flourish … but the eco-system is improving. There is more money coming into the venture capital segment and a big part of that is tech.” However, returns from this could be five to ten years away, he says.

Struggling with rates
After Mario Draghi, the president of the European Central Bank, said in 2012 that he’d do “whatever it takes” to save the euro, inflows to eurozone and European equity funds increased, says Holohan at Mediolanum. But these have gone again since.

Some of the most recent data from the funds industry reflects just how much the eurozone is out of favour. For 2018, net outflows from active European equity funds totalled €44 billion. Another €14 billion flowed out in the first two months of 2019, according to SYZ Asset Management. Also, in April, investors “continued to sell eurozone stocks” – about €2 billion worth – according to asset manager Amundi’s ‘ETF Mark Flows Analysis April 2019’.

“The ECB has struggled to move interest rates higher, and so Europe has not benefited from the resurgence in the global economic cycle,” says Holohan. Speaking with clients, he adds, European equities tend to rank bottom of their list of conversation topics. (At the top is whether there is a tech bubble).

However, some positive data did help the European bloc to achieve an increase in first-quarter growth, albeit by 0.4%, and BoAML has said macro conditions were showing signs of improvement. 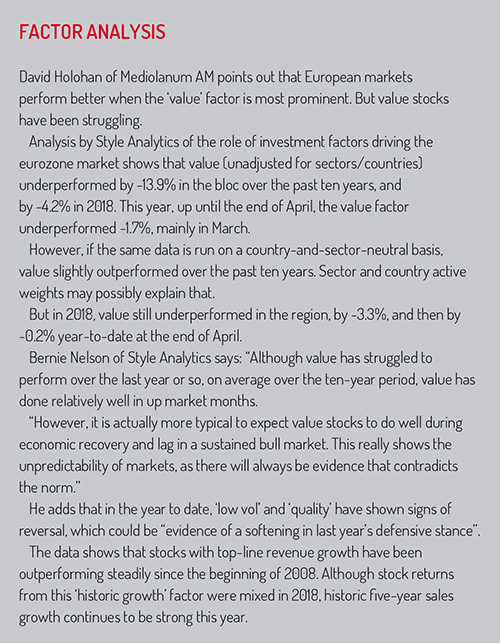 BlackRock iShares’ Wei Li says her firm expects the European economy to “pick up pace” in the second half of 2019, as financial conditions have eased “significantly” since the beginning of the year. As well as this, stimulus efforts in China could boost capital expenditure – a potential boon for European manufacturers.

Other factors that offer hope are that growth headwinds – such as German auto production shortfalls – are starting to subside, while the economy looks “reasonably positioned” given resilience among consumers and “attractive funding costs”.

“Our Macro GPS is showing signs of European growth bottoming out,” Li adds. She describes European stocks as the “laggard” in global markets and, while speaking to Funds Europe in late May, said they were trading at a 12% discount to developed market peers.

“One of the main arguments for European stocks is that valuations are cheap,” Holohan notes. “Yes, they’re cheap – but given the stock make-up, they will always look cheaper than the US. PE is 13x in Europe and 17x in the US, but this is because Euro Stoxx companies are growing more slowly.”

BlackRock data shows that investors are “tentatively” returning to European – including eurozone – equities with small inflows into broad European exposures, such as the DAX and Euro Stoxx 50.

“We’ve seen investors view the DAX, for example, as a vehicle to play a global recovery, given that it has been a performance laggard, as it is highly cyclical and fairly internationally exposed, with revenue derived highly from EM [emerging markets] and the US.”

Union’s Nedialkov adds: “If emerging markets have another very good run, probably a lot of European stocks would benefit from that, which has not been the case over the last nine years.”

For now, BlackRock iShares is still underweight Europe, as in Li’s words, “we are not believers in a sustained rally”. Poor earnings – with earnings-per-share growth of -1% in the first quarter – and poor profitability from the banking sector are reasons for being underweight.

At Mediolanum, Holohan says: “Unfortunately for Europe, it’s wait and see. Europe is in a tug of war between the US and Asia [over tariffs].

“Fiscal stimulus would reignite the story, but until then, it’s about ECB monetary policy.”