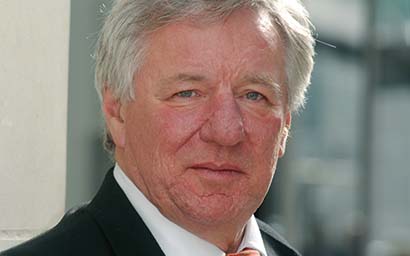 America’s election of Donald Trump and Britain’s vote to leave the EU confounded not only the political and media elites, but the financial services industry. Nobody saw it coming, admits Martin Gilbert, the co-chief of Standard Life Aberdeen, Europe’s largest independent asset manager.

“I think that’s partly because we speak to the wrong people. We speak to people in California, New York, Washington. We don’t really interact with people in Middle America. The more [Trump] gets attacked in the press in the US, the more his supporters like him. It’s the same with Brexit. None of us foresaw it. We must be totally out of touch.”

Yet it turns out even Trump didn’t envisage victory until the campaign had matured. Trump himself confessed this to Gilbert. The 45th president of the United States was still a presidential hopeful when he and the Scottish chief executive met through a golf course Trump had built in Aberdeen.

“I spoke to him in June, before the election, and he wasn’t really expecting to win then... He said, ‘If I lose, no one will even remember I stood.’”

It was Pennsylvania, a state no Republican had won for years, that boosted Trump’s confidence, according to Gilbert. Trump didn’t go to the state’s largest city, but found he could fill football stadiums in the towns.

Gilbert is open about his admiration for the president’s achievement. Trump won on a smaller budget, and he harnessed social media – something the Briton thinks more chief executives should do. He has 11,300 Twitter followers and had sent more than 2,600 tweets at the last count.

Just be disciplined about it,he advises. Don’t tweet after a long dinner.

But back to Trump. “The first thing I ever say to people when they say how dreadful Donald Trump is, is: ‘Look, he’s achieved something no one else has ever achieved, which is to be elected president of the United States from a non-military, non-political background.’”

The first thing to solve
But now to fund management. I’m interviewing Gilbert at the Calastone Connect Forum, a technology event hosted by fund transaction network Calastone. A key topic of the conference is the digital challenge, which he admits is the first thing he’d like to solve if money were unlimited – this “and the platforms”, because these are where growth will be over the next five to 20 years, he says.

Sticking with tech, he paints a picture of inefficient back and middle offices, which do not utilise technology to their full extent in comparison to front-office activities such as portfolio management and trading. Industry efficiencies are not so well managed beyond the portfolio investment decisions that are made, Gilbert adds. “There are still too many manual processes and the problem is, if we make an error, we’re not speaking about it costing £10,000, we’re talking about it costing £5 million.”

Of course many of the activities he’s referring to are carried out by outsourcers, such as fund administrators and custody banks. But even with this helpful model, there is an inherent inefficiency he’d like to get rid of.

“The other stupid thing that we [the industry] do is we sub-contract everything, which is great, because we don’t want to be doing a lot of the stuff, we’d rather give it to people who are  better than us.

“But then we check everything that’s done by the outsourcers! We’ve got departments that check everything. We’d be better doing it ourselves, I keep saying, rather than subcontracting.”

The cost pressures that asset management is under make these inefficiencies even more starkly clear.

“From the investment management part onwards, the industry is pretty inefficient and that is where we’ll see the most change over the next ten years. We are under huge pricing pressure at the moment as clients ask for passive, for fee reductions, so we are going to have to become much more efficient.”

This helps to explain why Aberdeen Asset Management, which he co-founded in 1983, merged with Standard Life, the two-centuries-old institution whose chief executive, Keith Skeogh, is now co-CEO with Gilbert.

The combined firm has £655 billion (€748 billion) of assets under management and is the largest independent player outside the US, says Gilbert. “[The industry] has changed beyond all recognition,” he adds.

“I would say we are going through some of the toughest times I’ve seen in the industry just now and I don’t mean markets, I’m talking about the dynamics of industry pricing, the [generational change and] technology.”

He describes the merger as “partly defensive and partly offensive”. Both asset managers were caught in the middle ground, considered to be at risk from distributors reducing the number of firms they work with. The received wisdom is that these distributors favour big houses with ample product ranges and a few smaller players adding alpha at the edges. Firms need to be either small, “which is a very, very profitable model”; or large enough to absorb the escalating costs and “immense” complexity of multinational organisations with extensive product ranges. He points out that Standard Life Aberdeen has 200 people working in compliance and 250 people in risk.

As clients push back on costs, which at the same time run higher due to factors such as regulation, the costs will be absorbed by firms rather than passed to clients, he says. As evidence, he notes that many firms have chosen to pay for broker research rather than charge clients. This change came about under the MiFID II capital market reforms introduced this year, which offers firms the choice to pay up or charge clients, but through a more transparent process.

Standard Life Aberdeen pays about £25 million for this research, Gilbert says, and because firms will purchase less research as a result of the MiFID II changes, “It’s going to be a very tough time in the sell-side. The number 23-ranked banking analyst is not going to have a job in a year or so, but the top three or four are going to do really well. The model is changing. They’ll all move to lower-cost organisations as well.”

Regulation is good for business
Despite the costs, asset management itself is still a very profitable business. (“I don’t want you to feel too sorry for me here!”) The problem, though, is that with a business operating 30%-40% margins, “people come in and disrupt you”, he says, referring to platforms. This was another reason for the merger, as the combined firm operates one of the largest platforms in the UK, he says.

On the whole, Gilbert approves of regulation. “Good regulation is good for the industry. I’m a firm believer in single pricing and more transparency.” Without this, asset managment will be at the “untrusted” end of financial services.

Regulation has not even been a drag on the firm’s development, he says. In relation to rules that require asset managers to hold more regulatory capital, he points out that after Standard Life offloads part of its insurance business to Phoenix Group - announced in February - Standard Life Aberdeen will have about £4.3 billion cash.

“Very broadly, we’ll need about a billion of cash as regulatory capital to run the business. Capital is not going down,” he says – and even though asset managers have added an extra buffer on top of regulatory capital, capital availability is still fine, he says.

There is, however, one consequence: “What it does do is place you at a slight disadvantage in return on equity to US managers, because they are allowed to have debt as part of their capital, whereas we are not in the UK.”

So it’s back to the US, where the firm has ambitions. “We need to be bigger in the US. The US is still dominated by families you’ve never heard of who have huge amounts of wealth.”
Gilbert says he hasn’t spoken to Trump since his inauguration. But his other Stateside contacts include the tech giants, whom he has visited to explore the digital future of asset management.

In the view of some pundits, members of the so-called FAANG grouping – Facebook, Apple, Amazon, Netflix and Google – could disrupt asset management with a Baidu-size bomb if they wished. Gilbert thinks Apple could make the biggest splash, as its brand inspires trust. “I think of all the brands, Apple is the one we most fear coming into asset management, but I don’t think they will, because they [the tech firms generally] don’t really like regulation. They don’t want to move into it.

“I keep telling them this. ‘You don’t want to be in this business, it’s too difficult. It’s a good way to destroy your brand, being in asset management.’”