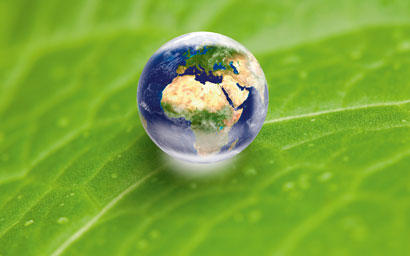 Funds Europe talks to Frédéric Samama and Marie-Anne Allier of Amundi Asset Management about the rise of green bonds and the likely development of this growing market.

In 2016, the green bond market was worth more than $90bn, a 120% increase on the previous year’s figure. It has enjoyed rapid rises every year since 2013 and, according to ratings agency Moody’s, issuance of green bonds could exceed $200bn by the end of 2017.

This rise has been driven, in part, by the momentum of the Paris Climate agreement as well as the high rate of issuance from China-based banks and corporates.

But the growing demand for green bonds, the proceeds of which are ring-fenced for environmental projects, is part of a bigger story, says Frédéric Samama, Deputy Global Head of Institutional Sales at Amundi. “It is a fascinating moment in the recognition of climate change and the various initiatives designed to counter its impact. For the past decade, climate change was an area for policymakers and NGOs. But in the last few years it has moved to involve society and institutional investors. A new force is emerging.”

On the investment side, there are four drivers for the popularity of green funds, says Samama.

The first is risk management. Few firms have managed to successfully and accurately price climate change risks, a point made by Bank of England governor and chairman of the G20’s Financial Stability Board, Mark Carney, when he wrote last December of the need for companies to disclose their exposure to climate change and global warming risks, so that investors can allocate capital to those companies most likely to reduce their carbon footprint and help hit the target of restricting the rise in global temperatures to less than 2 degrees Celsius.

The second driver is innovation, says Samama. “Once a company has disclosed its risks, how do investors adjust their portfolios and engage with corporates? Green bonds are an answer. This is a way to do engagement on fixed income.”

The last driver is policy, exemplified by the French government’s Article 173, which mandates that all asset owners and investors must show their ESG (Environmental, Social and Governance) footprint, the exposure of their asset(s) to climate change risk and the ways they are contributing to the low-carbon economy.

Cornerstone
The first wave of green bonds started ten years ago with the likes of the World Bank and the European Investment Bank. By March 2013, the wider corporate world started to get involved after the first $1bn green bond, issued by the International Finance Corporation (IFC), the World Bank’s private investment arm, sold out within an hour of issue.

By the end of 2013, the market was worth more than $11bn, up from $3.1bn the previous year. Major corporates such as Apple, which issued its first green bond for $1.5bn in February 2016, have added to the growth of the market.

“What is missing, though, are the developing world and corporates from the emerging markets”, says Marie-Anne Allier, Head of Euro Fixed Income at Amundi. In April, the French fund manager launched a $2bn green bond fund with investment of $325m from the IFC. The Green Cornerstone Bond Fund invests in bonds issued by banks in emerging markets and combines good expected returns with a protection delivered by IFC.

“It is only with the involvement of the developing world that we can hope to solve the problem of climate change,” says Allier. “And the best utility of these green bonds is in the emerging markets. They really help to finance important environmental projects.”

As the green bond market continues to mature, Allier believes it will become an accepted and mainstream investment vehicle. “A green bond is a bond like any other. There is one corporate issuer, so the risk is the same as it is for any bond. In the future, investors will select a green bond because of its volatility, yield, spread, risk and return.”

Green bonds are also a key indicator of how a corporate is positioned towards the green economy, and therefore a potential differentiator for a growing number of investors between corporates in the same sector, be that automobiles, oil and gas or technology.

“We are seeing a major shift in society and the action of corporates regarding climate change and environmental projects,” says Samama. “Some are leaders and some are laggards, so the green bonds market could be a way of screening portfolios.

Leading the way
While the industry is still immature, as evidenced by the fact that there is no set definition yet for what constitutes a ‘green’ project, the current political and societal sentiment toward climate change is well established.

Worldwide progress has been made since the Kyoto agreement. The Portfolio Decarbonization Coalition was formed in 2014 to gather asset owners already aligning their portfolios with a low-carbon economy in order to be a market place of knowledge transfer and send the signal that it was feasible and scalable. In parallel the Montreal Carbon Pledge was set up with a similar objective on the risk analysis.

Emerging markets’ central banks are investing in or launching their own green bond funds and European asset managers are leading the way in the creation and promotion of green bond funds. Along with the emergence of new forces, from the Chinese to institutional investors and even the Pope, this greatly limits the negative impact of the climate sceptic US president Trump, the US having always lagged Europe and emerging countries on this issue.

This document is not intended for citizens or residents of the United States of America or to any «U.S. Person» , as this term is defined in SEC Regulation S under the U.S. Securities Act of 1933.
Amundi accepts no liability whatsoever, whether direct or indirect, that may arise from the use of information contained in this material. Amundi can in no way be held responsible for any decision or investment made on the basis of information contained in this material. The information contained in this document is disclosed to you on a confidential basis and shall not be copied, reproduced, modified, translated or distributed without the prior written approval of Amundi, to any third person or entity in any country or jurisdiction which would subject Amundi or any of “the Funds”, to any registration requirements within these jurisdictions or where it might be considered as unlawful. Accordingly, this material is for distribution solely in jurisdictions where permitted and to persons who may receive it without breaching applicable legal or regulatory requirements.

The information contained in this document is deemed accurate as at 30 April 2017. Data, opinions and estimates may be changed without notice.