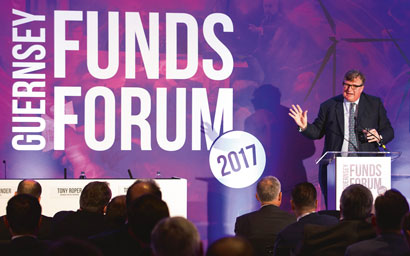 Crispin Odey used his keynote speech at the recent Guernsey Funds Forum in London to urge investors to return to the ‘first principles’ of investment.

The quantitative easing measures of the last nine years, in the US, UK and Europe, have grossly inflated asset prices and financed disruptive technologies which now threaten growth and employment in many industries, according to internationally renowned hedge fund manager Crispin Odey.

The founding partner of Odey Asset Management, who was the keynote speaker at the recent Guernsey Funds Forum, told the London funds audience that Central Banks have caused “financial repression on a global scale” as near-zero percent interest rates make economies “sloppy and weak”.

“As a result, we are in a world where no one believes they can hurt themselves. We have become very used to taking the drugs – the relief offered by quantitative easing measures,” Mr Odey told the 450-strong audience in a highly engaging speech.

“The resulting disruption in everything from the growth of fracking to passive investment opportunities is the most difficult thing in my world now. Investors have to go back to first principles. That is, focus on earnings or dividends, not the valuation of capital or worth of a company,” he said.

Mr Odey was preceded at the event by Guernsey’s Chief Minister, who told the City audience that the island offered an investment environment of security and stability unmatched by most other offshore financial centres.

“We are not your competition, we are your teammates in what is likely to be a marathon alongside those jurisdictions which seek to lure business away from the City.”

Latest figures from the Guernsey Financial Services Commission show that the net asset value of funds under management and administration in the island grew by £6.5 billion during the fourth quarter of 2016 to take the total value of funds  business in Guernsey to £255.9 billion at the end of December 2016.

“While 2016 was decidedly wobbly for some financial hubs, Guernsey is cementing its reputation as a strategic investment choice and we have seen a year-on-year increase of 12.5%,” said Mr Wheatley.

Big ticket
In a further positive for the island’s funds sector, it was recently announced that the total value of private equity business in Guernsey had surpassed £100 billion for the first time.

Substantial launches during the course of last year by big ticket private equity promoters including Permira, Apax Partners, Cinven, Macquarie, Partners Group and Inflexion all contributed to the record-breaking high of £110.3 billion.

Andrew Whittaker, the outgoing Chairman of the Guernsey Investment Fund Association, said: “The continued presence of these market-leading funds in Guernsey demonstrates its attractiveness to truly global investors, as a stable, well-regulated and tax-transparent place to conduct business as the world goes through a period of unprecedented change.”