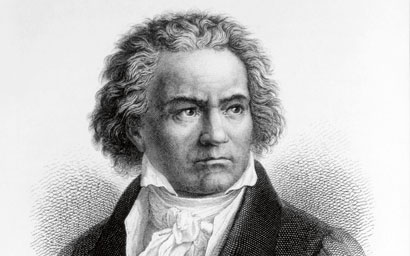 We live in uncertain times, but that doesn’t seem to be fazing German investors. It’s been a bumper year so far for the German asset management industry, which recorded total net inflows of €45.3 billion in the first quarter of 2017 and the second-highest net inflows to retail funds since the 2008 financial crisis.

So, who is mopping up these flows? Is it the traditional German fund groups, backed, in the main, by the big banks, or the many international fund managers that have now been a feature of the German market for several decades?

First of all, it’s important to note that there is an element of compulsion to the inflows, which overwhelmingly favoured balanced funds. With interest rates scraping the floor and some German treasuries turning negative, investors have little choice but to turn away from cash deposits and government bonds and embrace riskier funds.

“Liquidity is punished,” says Murat Ünal, founder of [email protected], an asset management consultancy based in Frankfurt am Main.

Naturally, the punishment is meted out equally to retail and institutional investors. Therefore, Germany’s traditionally cautious pension funds have had to take a more adventurous approach, increasing their exposure to equities and alternative asset classes.

“They have become much more aggressive than they used to be, though sometimes regulations limit them,” says Ünal. “Pensionsfonds have more opportunities to invest in equities than Pensionskassen, but across all vehicles there is more risk appetite.”

Concern about the risks inherent in equity investment remain, however. As is the case elsewhere in Europe, this has pushed investors into multi-asset products that claim to offer equity exposure while mitigating risk.

This trend has greatly benefited the growing number of boutiques in the German market. Flossbach von Storch is one example. It has €20 billion of assets under management (AUM) and had high net inflows relative to its size of €1.75 billion in the first quarter of 2017. It has jumped up the Mackay Williams ranking of third-party brands in Germany by five places to reach second place (see chart) behind the mighty Deutsche Asset Management, replacing Allianz Global Investors.

The ranking is based on interviews with distributors about their supplier selection and shows some arresting results this year. One of these is the meteoric rise of Acatis, a Frankfurt-based specialist value investor.

Thinking about ETFs
A development that can be considered complementary to the rise of boutiques is the increase in demand in Germany for exchange-traded funds (ETFs) and other passive investments. Diversifikator GmbH is one of a growing number of online portfolio managers in Germany that offer strategies based on ETFs. Such businesses have helped to generate demand in Germany for international businesses such as iShares and WisdomTree that sponsor ETFs. Currently, most of the big bank-backed German asset managers do not run ETFs. However, Dirk Söhnholz, founder and managing director of Diversifikator, believes “they are all thinking about it”.

Diversifikator itself offers 13 portfolios, including four ESG (environmental, social and governance) portfolios and one Islamic portfolio. ESG is another area where Söhnholz anticipates increasing demand in the German market, which does not yet have a large ESG fund sector despite a generally high level of ecological consciousness in the population. It’s just a question of winning the argument that ESG does not create additional risks or detract from performance.

“When distributors see that there is no performance risk, they will embrace ESG funds,” says Söhnholz.

Just as businesses such as Diversifikator have created demand for products run by once unfamiliar international companies such as WisdomTree, the larger German boutiques that have benefited from recent inflows have been taking their businesses into the international market.

Ünal cites the examples of Frankfurt Portfolio Managers (FPM), which manages a sizeable portfolio for the Norwegian government fund; Alpha Portfolio Managers, which advises a range of European clients; and Quonium, a Union PanAgora spin-off, which has opened an office in London. The funds of the fast-moving Acatis are registered for distribution in Austria, Switzerland, France, Luxembourg, the Netherlands, Spain, Liechtenstein and Hungary.

“A lot of these companies start local then look to expand their business outside Germany,” says Baratta. “They are trying to do what Carmignac did in 2005-6.”

It would be wrong to say that these boutiques have replaced Germany’s bank-backed players on the international market. The likes of Union Investment, the investment manager for the co-operative banking sector, has built up a team of people to cater for the international market. But it is the boutiques that are leading Germany’s international charge. Deutsche AM is the only German brand in Mackay Williams’ European top ten. Outside the top ten, Allianz Global Investors, which fell back four places in 2017, is being chased down by Flossbach von Storch.

“They are the hidden champions that went on to become international, while the banks are busy refocusing on their core domestic market,” says Ünal.

In contrast to the success of the German boutiques overseas, the advance of international groups in the German asset management market is less marked. The Mackay Williams data show a mixed picture, with Nordea shooting up the third-party brand rankings, while JP Morgan and Franklin Templeton have ceded ground.

Big in Germany
One international company that has made advances this year is Invesco. It now sits just outside the top ten in the Mackay Williams figures and the first quarter of 2017 was its best three months in Germany in the past five years. Sergio Trezzi, regional head of retail distribution  at Invesco, puts the company’s success down to patience and commitment.

“We took a little more time to develop our presence and brand,” he says. “One product, one company is the fastest way, but we took the difficult way.” 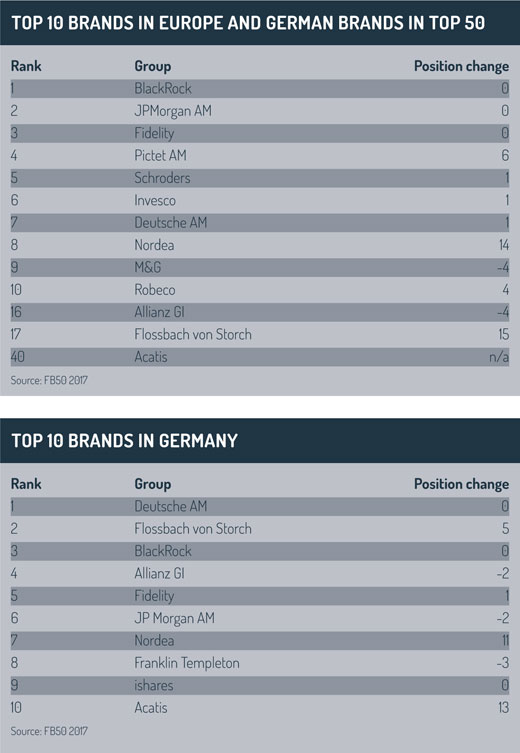 By this he means emphasising several products rather than just one. The Invesco Balanced Risk Allocation fund meets investors’ current desire for multi-asset solutions, but Trezzi also highlights quantitative strategies run partly by a team in Frankfurt, the Invesco Pan-European High Income fund and the Invesco Global Target Return fund, run by the company’s team in the UK.

In all, Invesco has two investment teams in Frankfurt. This cements its position in the German market, which it considers to be of fundamental importance in its European strategy.

In order to become big in Germany, where it currently has a modest funds under management of €4.4 billion (though more if ETFs and sub-advised mandates are included), Invesco has also targeted distribution through banks – another path that is not the easiest.

“Three years ago, we took the decision to grow into the bank channel,” says Trezzi. “We keep a strong focus and we invested a lot of energy to be their partner. Now we work with all the major banks in Germany.”

“Guys who were traditional wealth managers two years ago are now claiming to be robo-advisers,” says Ünal. “They mostly work with ETFs, but it’s difficult to run a profitable business based on ETFs. There will be a huge clear-out in the next three to four years.”

Hardy creatures
Ünal believes as many as 95-99% of today’s fintech/roboadvice sector will be gone in five years’ time. If the market is hit by a correction, institutional investors will pull out of the venture capital funds that are typically the robo-advisers’ backers, he suggests.

The few robo-advisers that survive will be hardy creatures and will be complemented by the banks’ own online offerings. According to Söhnholz, all the banks are busy planning and augmenting their offer in this area. It’s a shake-up that would make sense of Invesco’s distribution strategy.

Digitalisation is simplifying communication with final clients, says Carsten Majer, chief marketing officer for continental Europe at Invesco. “The banks will have an opportunity to react to this. We can help them, for example by speeding up the process whereby we provide information such as fund managers’ views to our clients.”

Meanwhile, Invesco’s Trezzi sees another shake-up in the offing that could benefit international companies such as Invesco. As the independent boutiques grow, they may lose some of the flexibility that made them successful in the first place.

“At some point they have to ask themselves if they are good enough,” says Trezzi. “That will be an interesting situation going forward. It’s an important element of opportunity for us.”