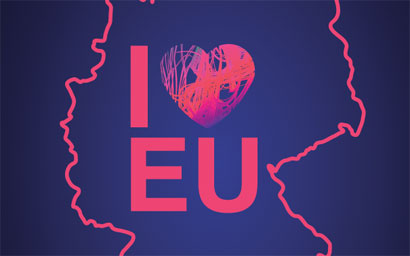 Sitting at the heart of the European project, it’s only natürlich that German firms want to leverage Ucits regulations as fully as possible. Fiona Rintoul finds having 50 million pensions savers in their home market does not mean international expansion under Ucits isn’t desirable.

No country is more central to the European dream of unity than Germany. And no other country’s fund industry tells us as much about where that dream is at when it comes to a single European market for financial services.

Not only that, the global recognition of the EU’s Ucits fund ‘brand’ means that non-European markets can be as much in the sights of a firm such as Deutsche AWM as European markets. The firm distributes its Luxembourg range in markets such as Thailand, Hong Kong and Singapore.

But what is true of global German brands such as Deutsche Bank and Allianz Global Investors is not necessarily true of all German fund management firms. For Deka, the fund manager owned by German savings banks, for example, the lines are clearer.

Certainly at present there is no shortage of work to do, both for the savings bank customers and for the institutional clients that together are Deka’s core client base. With interest rates pegged low, it’s important for Deka to be proactive in offering existing and potential clients more flexible products that provide some return.

“Investors are encouraged to do something with it rather than sit on it.”

Sometimes the yield doesn’t even have to be that good. Money market funds only produce a small positive yield, but it’s better than nothing.

“More and more customers, especially on the institutional side, but also on the retail side are punished for keeping savings in the bank,” says Bangemann. “They clearly are not happy with that.”

A BUMPER YEAR FOR INFLOWS
Under these circumstances, it’s easy to see why many German fund managers continue to concentrate on their home market in practice, even if the idea of a single European market for financial services is attractive in theory.

The statistics speak eloquently of those opportunities. At the end of March 2016, German fund companies managed assets totalling €2.6 trillion. During the first quarter of 2016, net inflows to funds totalled €28.1 billion, driven by the German institutional funds known as Spezialfonds that insurance companies and pension funds favour.

This followed a bumper year in 2015 when net new business reached €193 billion. Of this, €121.5 billion went into Spezialfonds and €71.9 billion into retail funds (Publikumsfonds), with the remainder held outside funds in products such as ETFs. 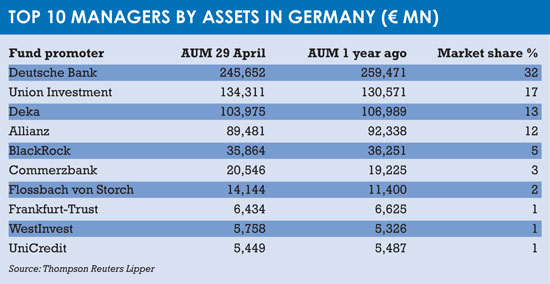 Furthermore, the German fund industry benefits from precious stability due to the large role that retirement savings play. According to the BVI, some 50 million Germans use funds to save for their retirement, either directly via Publikumsfonds or indirectly via insurers or pension schemes that invest in Spezialfonds.

But it would be a mistake to think that German fund management firms are only interested in their own market. A company such as Union Investment, which as the asset manager for a co-operative financial services network in Germany might be forgiven for sticking close to home, has a wide reach nowadays, serving institutional clients in the UK, the Nordic countries, the Netherlands, Switzerland, Italy, Austria, Japan and South Korea, sometimes taking advantage of its co-operative sector heritage to sell products abroad.

“In our international business, we focus on countries such as the UK in which the institutional market is dominated by investment consultants,” says Björn Jesch, head of portfolio management at Union Investment. “They act as multipliers, enabling us to sell more efficiently. Outside Germany, we also make targeted use of the partnerships of DZ Bank and other companies in the co-operative financial network.”

The company has also developed particular expertise in the areas of socially responsible investment (SRI) and shareholder engagement.

The percentage of retail assets invested in SRI strategies in Germany is low – about 1.6% of total assets – but the topic is increasingly important for institutional investors.

A recent survey conducted by Union Investment showed that 50% of German institutional assets were invested according to sustainable criteria, with this percentage rising to 77% for churches and foundations.

With the emphasis on SRI investment rising globally, this expertise can do the company little harm overseas. According to Jesch, international investors also appreciate the firm’s closeness to the European Central Bank and the “stable ownership structure and solid financial basis of Union Investment” – again qualities that come from the company’s co-operative ownership. This ownership model may at one time have seemed unfashionable, but it is now coming into its own.

BIG IN TAIWAN
Corporate-owned Deutsche AWM also uses its strong German base to further its aims overseas, for example in product development. “If we can win the Deutsche Bank retail network over to a certain idea, they will be able to fund it,” says Haas.

A recent example is the ‘Concept Kaldemorgen’, a flexible total-return multi-asset product named after a prominent fund manager. Despite the eponymous fund manager not being as well known outside Germany and the product name being a bit
of a mouthful, the fund – having been seeded in Germany – was a hit in Taiwan.

If anything illustrates both how global the asset management industry has become and how successful the Ucits brand is, Concept Kaldemorgan is surely it. And, of course, the traffic isn’t all one way.

Twenty years ago, foreign asset managers approached the German market more in hope than in expectation. Today, Haas cites Standard Life’s Global Absolute Return Strategy as one of the funds that has attracted most inflows from German investors as they try to deal with a low-interest rate environment. Foreign companies such as Schroders, M&G, JP Morgan Asset Management, Fidelity, Carmignac Gestion and BlackRock are all doing good business in Germany.

“Germany is one of the most open markets,” says Richter, who believes foreign asset managers have succeeded in part by switching their focus from the retail to the institutional market. “Years ago they targeted retail. Now they have changed. They saw the extraordinary inflows into Spezialfonds and recognised the structural advantages of institutional business.”

Just as well, perhaps, as the architecture in the retail market is becoming less, not more open. Richter sees that as highlighting a contradiction at the heart of the EU’s proposed updated Markets in Financial Instruments Directive (MiFID II).

“The directive is designed to create more open architecture but it does everything to prevent that,” he says.

Richter says a provision of MiFID II that requires distributors to define which products are suitable for specific client types creates a particularly severe administrative headache. “It’s a very difficult process and one of the key challenges for the industry at the moment. It’s not the only case. EU regulation is becoming more and more complex.”

THE BREXIT THREAT
The other potential threat to Europe’s single market for financial services of which Germany is such an important part comes from another group of people who are fed up with complicated EU regulation – those in the UK who favour Brexit. Many of the foreign fund management companies that operate successfully in Germany are British, or are US companies whose primary European base is in the UK.

There can be little doubt that, were Brexit to happen, it would affect the whole of the European financial services industry.

Union Investment, for example, opened an office in London in 2015. It seems safe to assume the company isn’t hoping for a ‘Leave’ vote.

“One should also not forget the consequences for the rest of the Eurozone,” says Jesch. “If the United Kingdom votes to leave the EU, then it is possible that other countries may follow – and we would expect the capital markets to price in such scenarios.”

This is the crux of the matter. The very fact that the UK is having a referendum makes other referenda possible.

For the moment, however, the dream of a united Europe is still alive – and Germany is at its centre.

Progress towards a single European market for financial services has at times felt glacial, and there are many hurdles still to overcome.

Nonetheless, the changes in the German industry over the past 20 years show how far the single market has come and how important the Ucits brand is for both European and international business.

“We are building a master-feeder structure in Japan that will use Ucits,” says Haas. “We have a co-operation in Thailand that uses a local Thai wrapper but invests in Ucits. Ucits gives such transparency. It’s a standard, and Luxembourg is the weapon of choice.”