New rules by the Financial Conduct Authority may push platforms to compete on price, which they warn would be a 'dangerous game'. Stefanie Eschenbacher reports.

Platforms in the UK will have less than two years to move their existing customers to the new charging model recently set out by the Financial Conduct Authority (FCA).

The emphasis is now on unbundled share classes, with the UK regulator finally bringing transparency to the way platforms charge for their services.

Providers of investment products pay a rebate to some platforms, which is usually funded through a fund’s annual management charge paid by customers.

But from April 6, 2014, platforms need to make the cost of their services transparent with a separate platform charge. Cash rebates for non-advised platforms will also be banned because the FCA says these could be used to “disguise” the costs of the platform charge.

The move towards more transparent fee structures means platforms might start to compete on price in a business where it is already difficult to gain and maintain market share, and getting more so.

POINT OF COMPETITION
Holly Mackay, managing director of The Platforum, says a lot of the price competition has already played out in anticipation of the Retail Distribution Review.

The advised platform has seen costs decrease across the board last year, she adds.

“In the direct platform market, everyone is waiting to see what market leader Hargreaves Lansdown does in response to the regulator banning rebates to platforms on new business from 2014.”

“It is common industry knowledge that they have a tender document with fund managers today, and will move to a core list of fewer funds of which price will be one of the selection criteria.”

Mackay says price – expressed in terms of total cost of ownership for the client, meaning fund costs plus platform costs – will be a point of competition.

“We now see greater transparency that will drive greater competition through the whole value chain from manufacturing to marketing to distribution,” he says.

“It is necessary for clients to see what they pay to whom and why.”

Mark Dampier, head of research at Hargreaves Lansdown, says “there is far too much talk about price”.He says when people have focused too much on price in the past, they bought things like Icelandic banks.

“Service becomes really important,” he says, adding that price is just one factor.

In order to compete on services, Dampier says platform providers need resources. This includes not only information on pricing, tax consultations, the ability to answer calls from customers but also “all the things people take for granted”.

While it is possible for clients to deal directly with companies, he says this is not at all practical and “would take fund management 30 years back”.

Clients who have a self-invested personal pension or an individual savings account, for example, would have about 20 different holdings. They would having to make tax declarations for 20 different investments, and at least 40 different pieces of reporting every year.

“How are you going to deal with that? What a platform provider essentially provides is a backroom office function,” says Dampier.

“People spend a lot of time talking about what funds to buy, but not about how to do the logistics of it.”

Michael Barrett, platform marketing manager at Skandia, says its new pricing levels are “virtually identical” to the old ones. However, he says that with more transparent pricing levels there is a risk of a price war.

“There will be some platforms which will compete on cost but that is a dangerous game. Something we always look to be competitive on is cost, but we do not aim to not lead on cost.”

Barrett says the biggest change will be the way independent financial advisers interact with their end customers, because they will have to agree on a fee for their services instead of being funded through commission.

LEVEL OF DETAIL
Barrett says most customers may not be that concerned about which party gets what share of the overall fee, but adds that some will be.

“Our research shows that most customers are probably not that concerned [but] there are some price-sensitive customers who look at that level of detail,” he says.

Skandia started the process of implementing an unbundled pricing structure about a year ago and is already compliant with what has been set out in the recent paper.

Barrett says Skandia has long been a supporter of the direction of the paper and the recent paper has just set out and confirmed what they had expected.

Stenning says while cost is one factor platforms will compete on, their focus is likely to be on value. The platform with the lowest costs is not necessarily going to be the most appealing choice for clients.

He compares it with shopping in a supermarket where the cost-conscious watch their budget while others favour a particular flavour and are willing to pay more for it.

“Platforms already offer huge options for clients to chose from,” he says, adding that additional product and service requirements depend on individual needs.

One feature Stenning would like to see implemented across platforms is exchange-on-exchange trading, which would allow clients to transact stocks in mutual funds, exchange-traded funds or investment trusts.

Mackay shares this line. She says there are many different types of customer with different needs and requirements. “Brand is fundamentally important for every non-advised customer,” she says. “Price less so.”

However, she adds that as awareness of what consumers are actually paying increases, she expects more cost competition across the industry.

Mackay says The Platforum has “road-tested” with some 15 direct platforms and found that “service does differ greatly from platform to platform, and you largely get what you pay for”.

What is still an unknown factor, she says, is quite how much consumers will be prepared to pay for such services. And it is likely that the industry will have to wait until 2014 for answers.

“Alongside price and service, one other key thing which we can see driving consumer behaviour is apathy,” she says. “It’s our opinion that some predictions about the pace of change are exaggerated.”

TRANSPARENCY
Dampier adds that another important factor – perhaps more important than price and services – is the financial strength of a platform.

One can argue that money that is invested via platforms is ring-fenced and investments should not be affected if a platform collapses.

But Dampier says if a platform gets into trouble it could take investors several months until they can access their investments and resume dealing. Christian Dargnat, vice president at the European Fund and Asset Management Association, says platforms provide another opportunity to optimise the execution of orders and are can be a step further for more transparency. 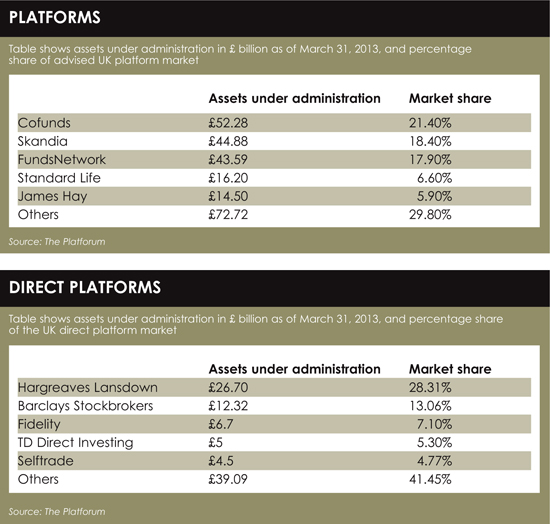 However, Dargnat says it is important to remember that transparency should not be searched at any cost as it may be illustrated with broker crossing networks, which provide an efficient way to mix platform and not display orders in illiquid markets as small medium enterprises may be.

“Each platform may propose a different business model considering the services associated,” he says, adding that asset managers using an electronic platform are looking to improve the quality of its execution.

“It is always the compromise of quality of execution and time to execute,” he says.

A spokesperson for the FCA says competition for the benefit of the consumer is good and the new rules will help promote innovation and improved customer service; but firms must never lose sight of the fact that they must always treat their customers fairly.

“We have set out our expectations for how platforms should behave in the policy statement, but we always welcome firms looking to go above and beyond their obligations to improve the customer’s experience,” says the spokesperson.

“However, platform providers need to ensure they understand our new rules and that they are compliant at all times.”

Cofunds and Fidelity FundsNetwork, two other major platforms in the UK, were unavailable for comment.