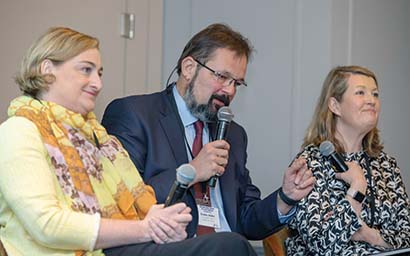 For its debut leadership event in Dublin, MDO Management Company assembled a roster of experts to discuss – among other things – international cooperation, regulation and director diversity.

After five days of rain, the sun shone on the first MDO Dublin Symposium – the management company’s inaugural annual leadership event, following the opening of its Dublin branch in 2017. Suddenly, everything seemed brighter.

With the deadline for Brexit just months away, guests discussed the opportunities going forward in a session entitled ‘Ireland and Luxembourg – leading European cross-border domiciles facing the future together’. This also looked at the increasing links between the two jurisdictions and the similar standards engaged by them.

Representing the views of Ireland and Luxembourg respectively were Kieran Fox, director of business development at Irish Funds, and MDO chief executive Martin Vogel. The resulting discussion – between an expert from Northern Ireland (with Irish nationality) and another from Switzerland – was moderated by a Brit, Funds Europe publisher Alan Chalmers. How’s that for international cooperation and neutrality! While the UK’s voice in Europe will be sadly missed, the conclusion was that it now fell to these key financial centres to continue their collaborative efforts and drive the agenda forward.

Next came an excellent panel discussion, ‘How sustainable is the future of the cross-border fund industry in the face of future challenges? Brexit, new EU distribution rules, a sustainable finance action plan and changes to the AIFMD’.

The debate around regulation was particularly good, with Gordon-Hart in very spikey form. Some, particularly Whelan, were grateful for regulation while others, such as Gordon-Hart, believed it was becoming excessive at times. All remained friends at the end of an often heated discussion.

The focus this time was on governance standards in management companies, the importance of independent directors with specialist knowledge and the increasing demand for diversity of gender, background and skills among these directors.

The panel agreed in general that the industry needed to make more progress in this area and that it was a key work in progress across the globe.

A networking lunch followed, with some animated discussions. As MDO’s John Madigan put it: “Delighted to see a full house, with the Irish funds industry turning up in force for MDO Ireland’s inaugural fund symposium.”