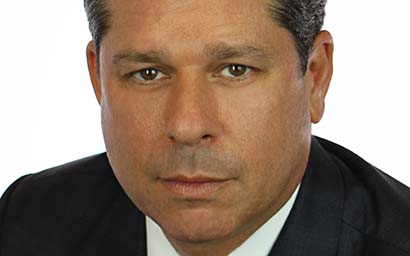 Interviewed in London just days after WisdomTree finalised a deal to buy the $17.6 billion (€15 billion) European business of ETF Securities, Jonathan Steinberg is in an ebullient mood.

“Everybody is excited to finally get down to business,” says the American ETF sponsor’s founder and chief executive. “The hard part was between the announcement and closing. Now is the fun part when we get to actually do business. We are really ready to go.”

The $611 million (€520 million) deal between New York-listed WisdomTree and London-based ETF Securities was announced last November and, following regulatory approval, was completed in April. The attraction of for Steinberg, known as Jono, was ETF Securities’ reputation as the largest producer in Europe of exchange-traded funds based around commodities.

The deal is WisdomTree’s second acquisition in Europe, following the purchase in 2014 of the London-based boutique Boost ETP.

“Europe is the second-largest ETF market in the world by a lot, so this was a very important strategic acquisition for the firm,” the 53-year-old financier (and husband of Fox News business journalist Maria Bartiromo) says in his characteristic Manhattan drawl.

“We now have scale and this will allow us to grow and launch new products going forward more quickly, because we are covering more of the market on a combined basis.”

The acquisition will, he says, cement WisdomTree’s standing as a “truly global organisation” in which 40% of assets and revenues are either based or come from outside the US.

The purchase brings the firm’s headcount to 240 employees, 70 of whom are in Europe. The aim is to bring the ETF Securities and Boost names under the WisdomTree brand by the end of the year.

Eleven senior staff at ETF Securities were made redundant as a result of the deal, which Steinberg says was necessary to avoid duplication of roles in the newly merged company.
While there will be further “cost synergies, for sure”, Steinberg does not expect to cut any further staff.

Steinberg adds that there is not a lot of overlap in the fund families of WisdomTree and ETF Securities and “we are not looking for a lot of consolidation”.

He does not discount the possibility that WisdomTree – which, rumour has it, could itself be the target of a takeover in the coming months – could make further acquisitions in the future, but “it would have to be something strong”.

“We have a highly profitable franchise here and we can afford to, and we want to, compete through execution and speed,” he explains. “What I always say is that if you are going to be beta, you need to be first. We are now the leader in commodities in Europe and that is very, very important.”

In the news
Steinberg founded WisdomTree in 1988 as a financial media company when he bought a monthly tabloid, Penny Stock Journal, and rebranded it as the (now defunct) personal finance magazine Individual Investor.

“I love my journalism days but the media is a tough business,” he says. “I love magazines and miss them, but ETFs is a better business than journalism and it was a good decision to sell out. Right now, I am happy with where I am.”

After the dotcom bubble, he decided to relaunch WisdomTree as an indexing business and sold off the magazine. But it was not until 2006 that the firm launched its first ETF.

In the 12 months following the fund launch, WisdomTree’s assets under management grew to $4 billion. They continued to grow steadily throughout the global financial crisis (with a slight dip in 2008) to $60.7 billion today.

Launching an ETF business just two years before the meltdown was, he admits, “a challenge, but in the end we were largely unaffected”. He notes: “We lost a tonne of market moves but we were still generating net flow. We did have to tighten our belts, but we came out of the crisis incredibly strong.”

Steinberg recalls that as a journalist, he wrote his first piece about ETFs in 1999, when global assets in the relatively new investment vehicles amounted to just $40 billion. Nineteen years later, they stand at more than $5 trillion.

With the exponential growth of the ETP market globally showing no signs of slowing, he has set a target of $100 billion in assets under management, although he has not set a timeframe.

“My guess is that we are going to see continued very strong growth in ETFs in Europe and we want to grow our market share,” he says.

The firm has no desire to become involved in the price war in the ETF sector in Europe, which over the past year has brought down fees for many passive tracker funds.

“We are choosing explicitly not to compete on the most commoditised non-exclusive beta plays,” he says.

“We are not looking to be a four-basis-point product competing with Lyxor now. They can have that flow: we would rather get you into nickel at 49 basis points.

“There are not that many betas you can launch today where you can be first, so if we find stuff we will, but mostly it will be educating the market on the European products that we have and then launching more smart beta, more liquid alts, some of the long-shorts.

“The aim is to really build out our differentiated product suite and to continue to grow and serve the market place, which is going to evolve very dramatically over the next decade.”

On the subject of regulation, Steinberg expects MiFID II – the EU’s recently revamped capital markets directive – will be “constructive” for the ETF industry as rules on transparency of fees “will make it easier for regulators to do their job of protecting investors”.

“MiFID is not causing us any headaches,” he says. “Quite the opposite, in fact: regulation is a friend to the ETF industry.”

He says that WisdomTree is “well positioned” to handle any changes that Brexit might force on the business.

All of the firms’ European ETFs are domiciled in Ireland through a third-party management company but the firm is now considering setting up an office in Dublin. If that happens, Steinberg adds, it “will not necessarily involve moving people from London”.

“There are some asset managers who will have to make significant changes to their businesses because of Brexit: re-registrations of products and things like that. We don’t have any of those complications at all. We might have to hire a few people and set up some basic infrastructure, but we are not expecting major disruption.

“Maybe there will be a little extra expense, but we can deal with that.”