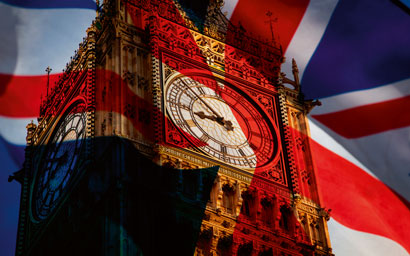 Headwinds in the UK are now in sharper focus, says Maya Bhandari of Columbia Threadneedle investments.

Recent economic and political developments in the UK have led us to take a fresh look at our forecasts and positioning in UK assets. Ahead of the general election, our managed funds, fixed income and global equity desks were broadly neutral on the UK, and within the region we had been allocating to large caps and more internationally focused growth companies.

Despite the surprise hung-parliament result in June, the market response fell along predictable lines, with a weaker sterling and resilient equity performance. We are, however, conscious that a number of material headwinds are likely to become more pronounced as we move into the second half of the year.

The primary headwind is general tightening of financial conditions, already started in the US, which is particularly concerning given the lack of momentum in that economy. The second headwind is the falling living standards, elevated personal debt and heightened political risk in the UK.

These symptoms are some of the unintended consequences of the quantitative easing (QE) measures unleashed by central banks in the past decade since the financial crisis.

The UK housing market has been impacted by artificially low rates inflating house prices as those with the means to put down large deposits invest. Banks insist on larger deposits as a means of identifying individuals who will be able to continue to service mortgages if interest rates increase, which keeps the younger generations off the housing ladder for longer. This is compounded by the fact that rent is going up, hindering those same younger generations from ever being able to save for a deposit.

At the other end of the generational scale, there are those whose defined pensions are at risk. The present value of long-term future-defined benefit pension liabilities has risen to the point that they are mismatched with the pension assets that have been boosted less by the lower rates and higher asset prices. These issues are starting to wear thin with the British public, so surely something must be done.

Perhaps though, this is not yet the time for the Bank of England (BoE) to make its move with the uncertainty of Brexit on the horizon. Interest rates will most likely stay low (though small hikes could be possible) to attract foreign direct investment, which is so vital to the UK to finance its current account deficit.

Cliff-edge Brexit
With respect to Brexit, our base case is that a fairly hard Brexit, where the UK loses single market access, would result in a weaker sterling and a more vulnerable gilt market. The failure of the Conservative Party to gain a majority in the election has thrown additional light on the Article 50 negotiations with much discussion on whether a coalition government (containing a chastened Conservative Party) will lead to a softer Brexit. 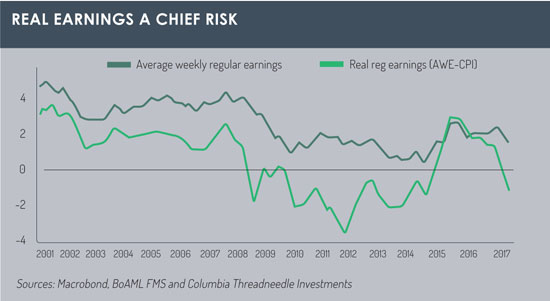 Indeed, the mechanics of Brexit itself are central to forecasting economic outcomes. While on the one hand it is possible that the UK might be able to withdraw its Article 50 application before two years lapse, it is also conceivable that the nuts and bolts of Brexit are not agreed over this period and a chaotic, cliff-edge Brexit ensues.

Under a softer Brexit or no Brexit, any risks to growth are judged to be on the upside, with a less inflation-tolerant BoE. A cliff-edge Brexit presents meaningful macro risks, threatening an already weak consumer (see chart), with a likely move higher in gilt yields, led by outflows from overseas investors. Our base case is for a fairly hard Brexit in which immigration remains a key issue and access to the single market is lost or severely constrained.

All of this leaves the UK at risk of having minimal tools to use if another crisis were to take place. What does this all mean for investors?

We are turning more cautious on UK equities, as existing headwinds have been brought into sharper focus following the election result.

Domestically focused companies must contend with further softening in consumer spending, as uncertainty rises and inflation erodes real incomes; moreover, the savings rate has collapsed, pushing the household financial balance into deficit for the first time since 2008. Large global companies may also be vulnerable to weakness in the US economy, especially those that are richly valued.

Meanwhile, the one-off boost to international earners from weaker sterling may have run its course.

Despite these headwinds, we believe that there are a cohort of companies that are set up to thrive in a low-growth world, even in the UK, and that these companies offer decent risk-adjusted return prospects in spite of the difficult macro-economic backdrop.

We anticipate growth in corporate earnings per share of 20% this year in the UK, falling to 7% in 2018. These forecasts are supported by the fact that investor underweights to UK equities are close to pre-Brexit lows, opportunistic M&A activity is picking up, and at 15 times 2017 earnings, valuations – particularly compared to the US – appear attractive.