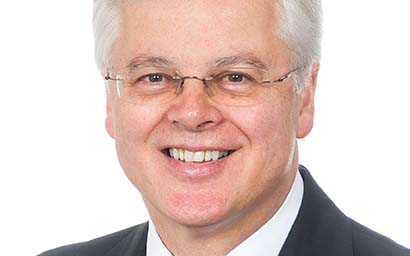 The chief executive of Jersey Finance tells George Mitton about private placement, reputation and why Jersey does not lead on price.

When two Englishmen meet, they either apologise to one another or discuss the weather. Geoff Cook and I choose the latter.

Fog, or rather the lack of it, is on my mind. While researching last year’s Jersey report, poor visibility prevented the aircraft in which I sat from landing in Jersey’s small airport. Instead, our pilot circled the skies for 40 minutes before giving up and laying his passengers down, inconveniently, in Southampton.

But this year, the heavens are clear and I have arrived without mishap at my appointment in St Helier with the chief executive of Jersey Finance, the body that represents the island’s financial industry. After a few remarks about clouds and drizzle, we sit down to discuss funds and finance.

Tried, tested
Cook, a buoyant Yorkshireman, is in a confident mood. After struggling in the 2008 financial crisis, Jersey’s funds industry has grown at a steady clip for the past eight years. The number of Jersey-domiciled alternative investment funds being marketed into Europe rose 15% last year, according to Jersey Finance data – a statistic that seems to confirm the island’s place as a useful offshore hub for fund managers seeking to reach European clients.

The direction of travel must be reassuring. Five years ago, when European legislators were drafting the Alternative Investment Fund Managers Directive (AIFMD), a bleaker outcome seemed possible. Then, it looked as though an increasingly protectionist European Union might employ the new directive to place a barrier around its onshore investors.

In response, Jersey scrambled to match its internal regulatory system with that of the AIFMD, in order to attain ‘equivalence’ that might lead, ultimately, to an AIFMD passport – an arrangement to let qualifying Jersey-domiciled funds be sold to onshore European clients under the directive.

Yet it didn’t happen: Jersey has not been granted an AIFMD passport, nor have its fortunes as an alternative fund jurisdiction collapsed. In fact, the national private placement regimes (NPPRs), which are pre-existing patchworks of agreements to allow offshore investment funds to be marketed to European institutional investors, are still the predominant way managers of Jersey-domiciled funds get their products into Europe.

What explains the persistence of this older model? According to Cook, investors and fund managers prefer the process because it is tried and tested. He says: “People are used to this well-trodden path.”

Brexit-proof?
The persistence of the NPPRs has allowed Jersey to claim it offers stability amid the storm of Brexit. Jersey, along with the other Channel Islands, has an unusual constitutional relationship with the UK, acknowledging the British monarch as its head of state while maintaining political independence.

Jersey has never been part of the EU, which means its NPPR arrangements ought, in theory, to be independent of the wrangling between London and Brussels. That is an appealing prospect to any UK-based fund managers who are worried about losing access to European clients as a result of Brexit.

Jersey’s funds industry has further argued that Jersey’s acquisition of an AIFMD passport, which has almost certainly stalled while the UK and the EU negotiate their divorce, is becoming irrelevant. NPPR works. Why complicate things?

Of course, one risk is that private placement ceases to work. The legislators who drafted the AIFMD envisaged that the new directive would eventually supersede the NPPRs. There have been rumours in places like Dublin and Luxembourg that the fateful switching off of private placement – an alarming scenario for Jersey’s funds industry – is at hand. Cook doesn’t believe it.

“Our competitors have tried to put across the view that NPPRs will be replaced. They would say that. We’ve seen no indication from the capitals – Brussels, Berlin – that there’s any appetite to do so.

“Almost all large European countries have deficit economies. They don’t have the wherewithal to deliver all the capital they need internally for their development needs. As importers of foreign capital, why would they cut off a viable route for that capital?”

Recent scandals
Assuming the NPPRs stay active, Cook says Jersey has a bright future for funds. Using private placement, fund managers can reach institutional investors in countries such as Sweden and the Netherlands more cheaply than if they were required to comply with the AIFMD.

Part of the island’s appeal is its well-established fund servicing sector, which has attracted some of the world’s most high-profile managers – among them the team behind the SoftBank Vision fund, a technology investment vehicle backed by the Saudi Arabian government, which was structured in Jersey.

Cook further argues that on a small island where one in four people of working age are employed in financial services, the local Jersey regulator and authorities can be relied upon to support the funds industry.

Local politicians are working busily to ensure the Crown dependencies are considered in the Brexit negotiations and are backing experimental projects to try to keep Jersey (with its population of 100,000) at the forefront of global technology trends. To this end, Jersey has hosted cryptocurrency funds and initial coin offerings.

There have been scandals nonetheless. A recent leak, part of the so-called Paradise Papers, suggested technology giant Apple had used Jersey as part of its structuring to reduce its Irish tax bill. The persistence of loopholes that allow such arrangements explains, according to Cook, why the EU included Jersey in what has been called a “grey list” of offshore centres with problematic tax laws.

There is, he says, room to tweak Jersey’s tax rules, notably to distinguish more clearly between investment entities, which Jersey is keen to attract, and trading companies, such as Apple, which might exploit Jersey’s tax neutrality to reduce their liabilities.

But Cook insists that despite these criticisms, Jersey’s strength is its reputation. “We’re principally an institutional and high-net-worth jurisdiction,” he says. “We tend to pitch our stall for where the investor is concerned for their own brand values.

“We don’t lead on price,” he adds, perhaps seeking to distinguish Jersey from jurisdictions such as the Cayman Islands, where fund structuring is relatively inexpensive but where regulatory standards are comparatively lax. “We think that over time, that lighter-touch model will become less appropriate.”