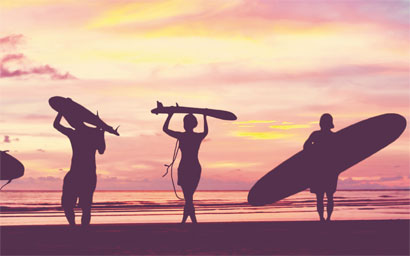 Famous as a domicile for funds managed elsewhere, Jersey would like to be known as a place where fund managers live and work, too. The chief executive of Jersey Finance, which promotes the jurisdiction, says that in the past ten years the number of hedge funds whose managers are physically based in Jersey has risen from three to more than 20. That kind of growth is noticeable for an island of 100,000 people.

Many on the island would like more companies to come. More fund managers means more demand for service providers, such as law firms and administrators, which account for a large chunk of Jersey’s economy. But the path ahead may not be smooth. As the UK plans to leave the European Union, uncertainty hangs over the island’s funds industry. Many are asking, will Brexit be good or bad for us?

BEDFELLOWS
As one of the Crown dependencies, Jersey has a curious relationship with the UK. Though technically a ‘possession’ of the Crown, Jersey is self-governing and largely independent. This means that, in some respects, Brexit is an irrelevance. Jersey has never been part of the EU, and the island is hoping its relationship with the EU will not change due to Britain’s departure.

The UK’s referendum vote of June 23 does not seem to have affected demand for Jersey’s services yet. Locate Jersey, a government body that handles applications from businesses and wealthy people who want to move to the island, says it had roughly the same number of business applications last year as in 2015, about 130.

Paul Burrows, who works for the agency, says the advantages offered by Jersey – its proximity to Europe, its general absence of tax and its recent investments in digital technology – will persist regardless of Brexit. He also says the Jersey government is working with that of the UK to ensure Jersey will be “well-positioned” after Brexit, but he would rather not predict whether Brexit will be a net gain.

“It’s wait and see,” he says, pointing out that no one can know the potential impact until the UK determines what its own post-Brexit status will be.

THE UPSIDE
Others on the island are more optimistic that Brexit will benefit Jersey. One area of opportunity concerns the Alternative Investment Fund Managers Directive (AIFMD).

After Brexit, UK-domiciled alternative funds will presumably lose their ability, under the directive, to be passported across the EU. Though the providers of these funds might choose to redomicile them to within the EU to maintain passporting rights, Elliot Refson, a director of fund administrator Crestbridge, thinks moving to Jersey would be just as good.

That idea may seem counter-intuitive given that Jersey, like post-Brexit UK, would be outside the EU (from the perspective of the directive, each would be a ‘third country’) but Refson notes that Jersey has always been outside the EU and, in recent years, its industry has become adept at using national private placement regimes to allow Jersey-domiciled funds to be sold into certain European countries.

Refson thinks that after the UK leaves the EU, there will be a period of confusion before UK fund managers are able to master the private-placement route. During that time, UK-based managers might lose access to investors in countries such as the Netherlands. But not if they move their funds to Jersey.

“We’re offering future-proofing,” he says. “When the UK comes out of the EU it will become a third country from a standing start, since it cannot negotiate with individual countries until it has left. Jersey offers stability as a third country along with the benefit of national private placement regimes.”

OBSTACLES
There are problems, however. The uncertainty around Brexit seems to have stalled Jersey’s bid to gain a third-country passport, which would be a licence under the AIFMD to allow qualifying Jersey-domiciled funds to be sold throughout the EU. 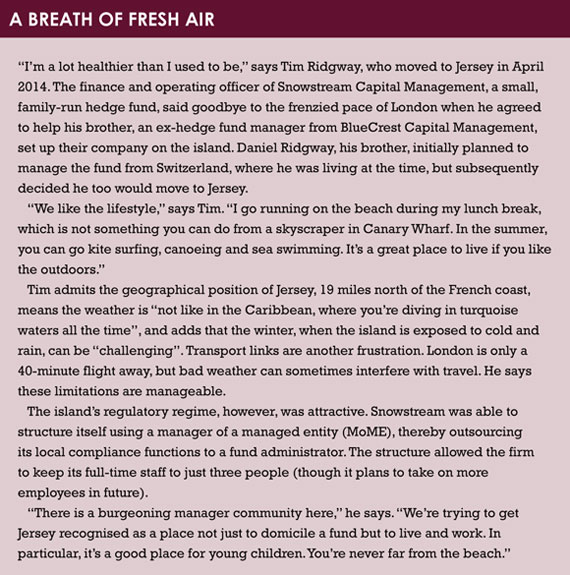 The delay is frustrating for Jersey given that in July 2016, its opt-in, AIFMD-equivalent regulatory regime was recommended for a passport, along with those of 11 other non-EU countries, by the European Securities and Markets Authority.

The decision to grant the passport lies with European lawmakers and, according to the chairman of the Jersey Funds Association, “frustratingly, third-country passporting has become something of a political football following Brexit”.

Without a passport, Jersey-domiciled alternative funds cannot be sold into those EU countries that do not have viable private placement regimes in place, such as Italy or Spain.

Another risk to Jersey concerns uncertainty in the markets. If, as many in the City of London fear, business grinds to a halt while financial firms wait to see the outcome of the Brexit negotiations, Jersey’s funds industry could suffer.

BOAT LIFE
However, Jersey has attractions for fund managers regardless of Brexit. The island has generally avoided the kind of scandals, such as the Panama Papers leak, that have blighted other offshore financial centres. In a fast-changing world, many fund managers appreciate the relative stability offered by the Jersey Financial Services Commission, which is unusually accessible for a regulator (it can afford to be, given the small size of the island’s population and the importance of its financial services sector).

But talk to fund managers on the island and they will mention another virtue: quality of life. For managers relocating from, for instance, London, Jersey offers an attractive, outdoor lifestyle, where fund managers can walk to work along the beach, or go surfing on their lunch breaks (see box). For these enthusiasts, Jersey is simply a pleasant place to live.