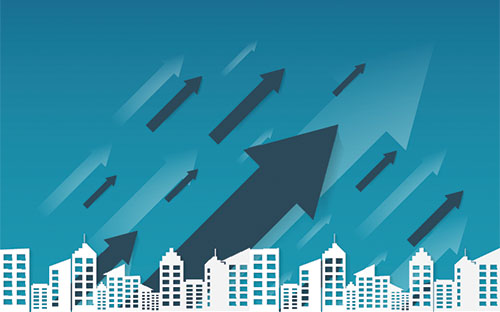 The FCA’s new rules on property funds came out before the M&G fund suspension in December and now everyone has their own ideas about managing liquidity. Nicholas Pratt reports.

The UK’s Financial Conduct Authority (FCA) is set to introduce new rules for liquidity management of property funds in September 2020 after more than three years of consultation. However, events are conspiring to make each new proposal out of date.

The watchdog’s initial review was sparked by the volatility that followed the UK’s Brexit referendum in 2016, which in turn led to a wave of redemptions in property funds exposed to UK real estate. And then, just as the FCA issued a consultation paper (CP 18/27), the 2019 suspension of the Woodford Equity Fund led to a further re-examination of liquidity management measures.

The FCA finally published its new policy statement (PS 19/24) at the end of September 2019 with a view to implementing three new rules by September 2020 (see box).

Then came the suspension of the M&G Property Fund in December after it was unable to meet investor redemptions.

There were already some concerns about the UK real estate market after the sector saw more than £900 billion (€1.07 billion) in outflows in the first three quarters of 2019. The bigger issue, though, is the liquidity mismatch between open-ended funds offering daily liquidity and immovable assets like property that can take months to be sold.

Outgoing Bank of England (BoE) governor Mark Carney has said that such funds are “built on a lie”, and the central bank issued a joint statement with the FCA in December calling for a review of redemption terms and an assessment of the price discount terms needed to sell enough assets to meet redemption demands.

“Redemption notice periods should reflect the time needed to sell the required portion of a fund’s assets without discounts beyond those captured in the price received by redeeming investors,” the BoE said.

FCA approach “a mistake”
Ryan Hughes, head of active portfolios at UK-based investment platform AJ Bell, criticised the FCA for shying away from banning these kinds of daily-dealing funds. “Bearing in mind the fundamental mismatch between the underlying assets and liquidity offered to investors, [the FCA’s approach] looks to be a mistake, particularly given the fact that this type of fund has now been suspended twice in four years.”

Simon Redman, managing director at Invesco Real Estate, called the FCA’s rules “sensible and well-considered” and welcomed the effort to try and remove the stigma around fund suspensions. “I think most investors are aware that you can’t sell a property overnight. The recent instance of gating is just prudent liquidity management and the FCA recognises this,” he says. “I don’t think you should legislate for isolated incidents and most of the property funds operate well on a daily basis.”

The UK’s trade body, the Investment Association (IA), has also come out in support of the FCA, stating that the new rules “combine enhanced liquidity management with additional disclosure requirements” and “will benefit investors, helping them make informed choices about their investments and strengthening fund management processes”.

Further, the IA has come up with its own solution to the liquidity mismatch in open-ended property funds in the form of the Long-Term Asset Fund. This is designed to “provide an additional route for patient capital to flow into the economy”. It extends the “liquidity toolkit” available to fund managers with the use of a notice period or less frequent redemptions, as appropriate to the fund’s assets.

John Forbes, consultant and author of an independent report into fund behaviour after the EU referendum published by the Investment Property Forum, has lobbied for a similar change, calling for deferred redemptions instead of what he dubs the “sledgehammer of suspensions”.

Forbes adds that he does not think suspensions are necessarily a bad thing, but he wants to see funds offer a longer term for the repayment of redemptions, such as six months. This would be preferable to forcing funds to hold cash reserves to fund daily redemptions – a requirement that could affect their ability to invest and generate returns. He adds that retail investors should have the choice to tie up their money for longer to achieve a higher return.

“You can put money into the fund on a daily basis, but it can take six months to get your money back. But the FCA has not changed the rules to allow that yet. If that type of product was available, then investors could make a choice.”

He adds: “The current rules are based around funds that can be traded daily and redemptions can only be deferred to the next day. Elsewhere in the regulation, it allows for redemptions that are six months apart.”

Market adjustment
There is another obstacle: the architecture of current platforms used by retail investors, which cater only for funds that trade on a daily basis. In short – if you want to appeal to retail investors, your fund needs to be on the platform and for your fund to be on the platform, it needs to offer daily liquidity, thus creating an operational mismatch.

“I like the idea of a deferred redemption model,” says Invesco’s Redman. “It is a less binary approach than suspensions, but you need the platforms to be able to handle such a model.

Deferred redemptions would be a useful tool, but only if you can use them properly. I would like to think that as more real asset funds become available, the market will be able to adjust. But this may take some time.”

The investment platforms have been quick to criticise the FCA for failing to protect investors. But what about their own limitations in terms of flexible infrastructure? Adrian Lowcock, head of personal investing at Willis Owen, an investment platform in the UK, says the technology that platforms use has been geared around daily dealing, so it is not a simple thing to change.

“However, technology is supposed to be there to work for us and help deliver what we need, not restrict or limit what we can do,” he says. “Whilst there is cost and time required to adjust the technology, that in itself is not the right reason not to do it.”

The issue is more closely linked to the customer, says Lowcock. “The platforms and the technology went down the daily-dealing route, as that is what investors wanted. Introducing the potential for deferred dealing will add another layer of complexity to their investing experience and presents an opportunity for error or confusion.”

He adds: “When servicing the retail market, you are servicing a broad audience of investors with a large range of knowledge, experience and confidence. The key to encouraging more people to invest is to make it as simple as possible. The deferred redemptions approach doesn’t do that. The reality is open-ended funds don’t suit illiquid assets.”

Enough of a market
Forbes, the writer of the report into investor behaviour after the Brexit vote, believes that the M&G suspension has strengthened the case for giving investors greater choice when it comes to property funds and how illiquid assets are managed for them. He also argues that most retail investors understand the cost of daily liquidity and the potential mismatch with illiquid assets like property. 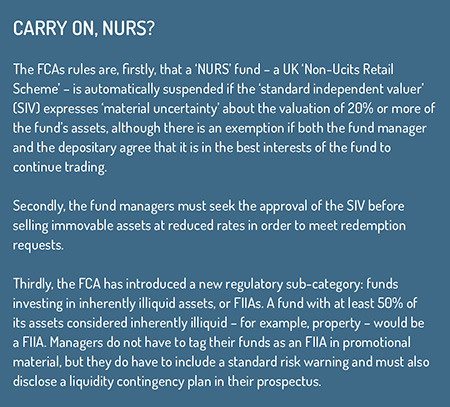 Instead of focusing on educating those investors about property, there should be a greater onus on intermediaries, seeing as most funds are sold through model portfolios and financial advisers, he says, and so these intermediaries should be able to work out a solution rather than having to educate retail investors.

“I can’t see any reason for not changing the regulation to allow deferred redemption. The [operational issues with] platforms will affect take-up but if there is enough of a market, people will be willing to invest in changing their platforms.”