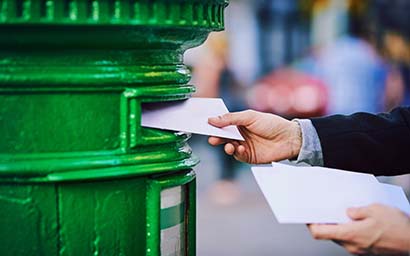 Tougher ‘substance’ rules that should rule out ‘letterbox’ entities in Ireland came in the form of CP86 and continue to reverberate around the industry, reports Nick Fitzpatrick from the Irish Funds annual conference.

March 31 this year marked the deadline for individual fund management companies in Ireland to have in place plans to show that their operations are far more substantial than the ‘letterbox’ businesses that have afflicted the reputations of some other fund and banking domiciles.

Ultimately, the required plans boil down to the Central Bank of Ireland (CBI) ‘CP86’ guidance, which requires fund managers to have higher levels of governance and – crucially – more ‘substance’, meaning that governance functions are predominantly carried out on Irish soil.

Theoretically, firms that may have fallen short of the CP86 requirements by having too many key staff abroad will be busy now head-hunting for qualified people to work as independent fund board directors, full-time employees in roles such as compliance, and even as chief executives – roles that were all targeted by the CBI as necessary for firms to increase their Irish substance.

One firm to have structured its pan-European business in Ireland along the lines of CP86 is PGIM, a US fund manager with stock and bond funds domiciled in Ireland.

PGIM Investments, the firm's Ucits business, originally set up an umbrella fund governed by the EU Ucits rules in 2013. The early assets of the fund were around $750 million, according to Elizabeth Samson, head of Ucits/QIF product development and governance at PGIM Investments, who was speaking at a CP86 panel on May 20 during the Irish Funds three-day annual conference. 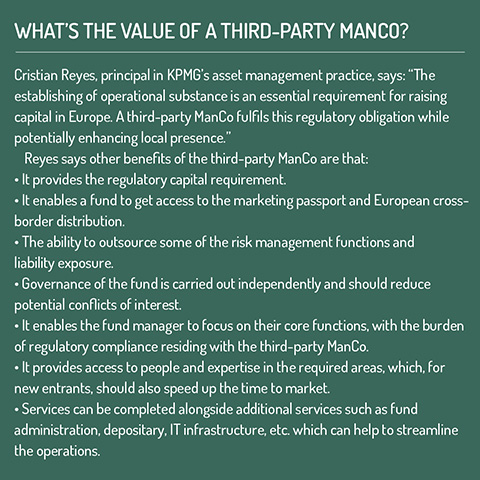 In the past five years, a time in which PGIM’s platform grew from six funds to 28 and assets under management (AuM) increased to $9.5 billion, the firm has employed more infrastructure to support product development and distribution.

PGIM Investments originally operated its Irish fund platform as a self-managed investment company. The ‘Smic’ model is widely seen to be under threat now because CP86 appears to spur alternative operating models.

The Smic was a “great structure”, Samson told the panel, “but we were growing”.

Board decision time
Future scalability was central to PGIM’s assessment, albeit the arrival of CP86’s ramped-up governance requirements in 2014 also meant it was simply a good time for PGIM to review its platform, said Samson. The firm employed consultancy Deloitte and spent six weeks researching operating models.

PGIM asked itself whether to staff up its Smic with the CBI-required extra full-time employees (or ‘full-time equivalents’ – FTEs); or whether the firm should create its own ‘management company’.

A management company, or ‘ManCo’ as they are known in the industry, is essentially the regulatory and compliance function – or ‘middle office’ – of an asset manager. Separate from the parent, it can outsource front and back-office functions – such as portfolio management and custody – to the parent or to another firm entirely. 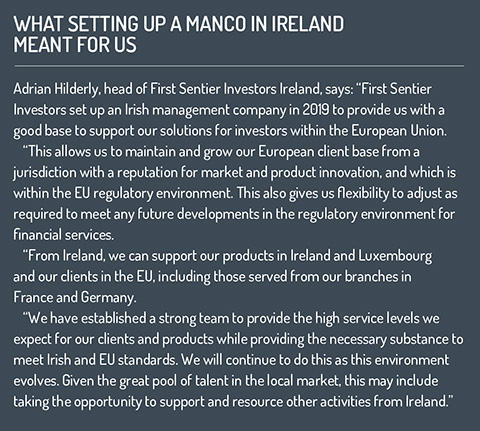 Yet the entire ManCo itself can be outsourced, too, and the market in providing third-party ManCos in Ireland has grown – just as it has in Luxembourg, where governance and substance has also been ratcheted up in recent years.

In the end, PGIM has opted to create its own ManCo in Ireland rather than outsource it. The other option considered was to leverage PGIM’s Luxembourg-based ‘AIFM’ – another legal entity, this time for alternative investments – and used it to add in traditional Ucits funds and become a ‘super ManCo’ for cross-border European operations.

Samson said PGIM has opted to apply to Ireland’s funds regulator to create a ManCo and that this is for reasons of future scalability and because the firm has decided to commit to Ireland. “Going to a different domicile and adopting a different structure didn’t make sense to our board,” she told the panel.

Zero for the Smic
Where PGIM is going, others already have gone, or are expected to follow.

During the same Irish Funds panel, an audience poll suggested that the popularity of operating models in response to CP86 requirements would be:

Thematic review
The results seem to reflect general opinion, although Ireland’s third-party ManCo providers would perhaps have liked to see that number higher. (Also, a slight mystery could be the 20% who voted ‘other’).

None of this is to say that Ireland-based fund managers – often subsidiaries of firms from the US and the UK – were predominantly letterbox entities in the first place. When the CBI published a CP86 ‘Dear Chair’ letter in October 2020 after a thematic review of the funds governance regime, the regulator said the CP86 governance framework provided robust governance and oversight arrangements “when applied correctly”, but added that it had found that a significant number of the 358 fund managers licensed in Ireland at the time had failed to implement the framework in full and could only evidence limited changes that had been required by previously issued CP86 guidance.

Michael Hodson, an independent non-executive director, also took part in the Irish Funds panel and said the reason for the CP86 review in the first place had included the CBI starting to put more attention on fund managers, having focused initially on the banks after the 2008 financial crisis.

But he also highlighted the growth of Ireland’s funds industry as another catalyst. “That growth brings more scrutiny, and through a combination of the central bank’s own work and seeing some large firms with minimal resourcing, a number of individuals with excessive directorships, and questions being raised internationally at the size of the industry, it was clear a more robust and defensible regime for fund management companies was needed.” 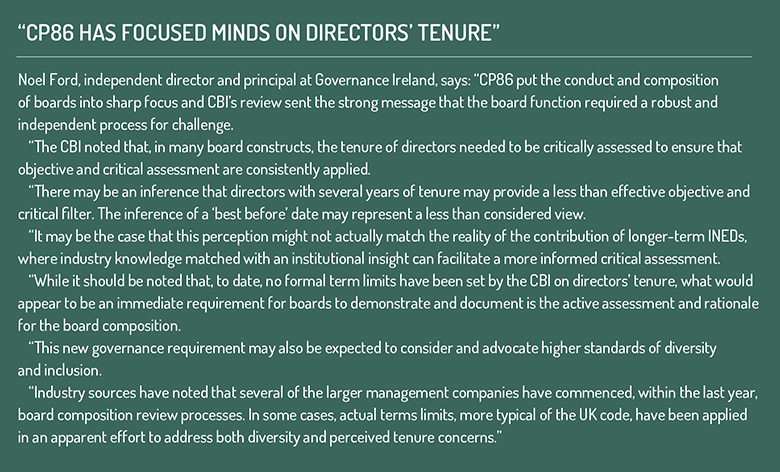 Brexit and the growing number of firms relocating from the UK (which intensified questions about substance) may have been a driver in the speed of the review, he said, but Brexit was not fundamental to it.

However, what was an important driver for CP86’s existence was the scale of outsourcing, or delegation, by funds.

“CP86 is critically important for the industry. It is the mechanism when applied properly, for individual firms and the jurisdiction to demonstrate that there is a robust regime in place for the oversight and control of the delegated investment management model, thereby delivering the necessary proof that there are no letterbox entities in the fund management industry in Ireland,” said Hodson.

Brief consideration
Fíonán Breathnach, of law firm Simmons & Simmons, summed up some of the key requirements of CP86, such as the need for ManCos and Smics to have a minimum of three full-time equivalents; that they must have locally based ‘designated persons’; and – for larger ManCos and Smics – that these are to be full-time. There needs to be increased oversight of delegated providers and of risk management frameworks, board approval of new funds, organisational effectiveness directors, greater diversity, and the regulator wants to see all but the smallest firms appoint chief executives in Ireland. 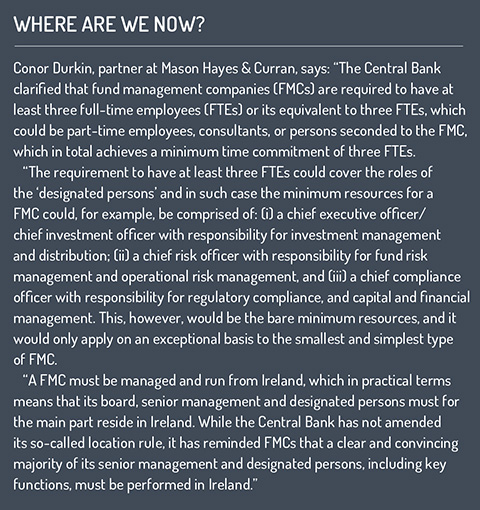 In relation to the poll results, Breathnach said that the decision to establish a management company implies a big commitment to operations in Ireland.

In his experience, firms had considered remaining or becoming Smics, because in some cases they would only have to employ the minimum of three full-time equivalent employees. But the firms “only briefly considered” this option.

He said: “Those employees having to be largely located in Ireland, the challenge of going out to the market and sourcing adequately qualified people, and also the regulatory and operational challenges of implementing a structure that frankly isn’t really recognised market practice, it would require a critical review of the fund [and] the business model itself [including if there would be enough workflow for the three employees]. So, plugging into a ready-made management company seemed sensible.”

Firms that had to carry out assessments by the end of March would have to identify changes and any plans would need to have a deadline embedded in them, the conference heard.

Funds Europe asked the CBI if there had been any increase in requests for designated persons to be approved. The CBI said it does not provide details on numbers of “pre-approved control function” applications for fund management companies.

The CBI intends to conduct another review of CP86 matters in 2022.