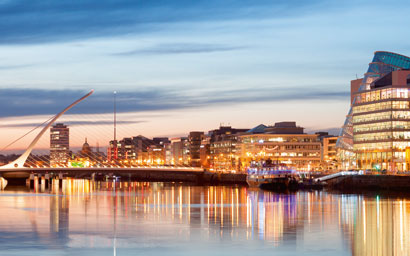 The Irish Funds Industry Association was formed in 1991. Twenty-five years later, Ireland has grown into a globally renowned funds centre. Funds Europe looks back at the milestones.

The first significant milestone in the development of Ireland’s funds industry was the launch of the International Financial Services Centre (IFSC) in 1987 under legislation devised by taoiseach (prime minister) Charles Haughey. The objective was to boost Ireland’s economy by attracting international financial institutions to the island with a promise of favourable tax rates and a supporting infrastructure.

The launch of the IFSC was prefaced by the Finance Act of 1986, which introduced financial incentives to encourage private sector investment in the urban renewal of Dublin’s docklands area. This Act was then updated the following year to include a special 10% corporation tax rate for companies setting up in the IFSC.

The construction of the IFSC took place in two stages. The first phase began in 1988 with three ‘statement’ buildings (The International Centre, IFSC House and La Touche House) that reportedly announced Dublin’s arrival as an international financial services hub to be reckoned with.

In addition to the fund managers, administrators and custodians based at the IFSC, there are a number of well-represented supporting industries – from legal and accountancy firms, to shared service centres and data centres, and from outsourcing providers to a growing software development and fintech sector.

In 1987, Ireland had just re-elected Charles Haughey as taoiseach and leader of a minority government. Nevertheless, Haughey and his Fianna Fail colleagues embarked on a series of severe cuts to public spending, earning his minister of finance, Ray MacSharry, the nickname ‘Mac the Knife’.

Austerity was nothing new to Haughey. Back in 1980, in a pre-budget broadcast to the nation, he told them: “We are living way beyond our means.” However, after leaving office in 1992, Haughey’s legacy was somewhat sullied by financial scandal, most notably the fact that he embezzled taxpayers’ money to buy designer shirts and expensive dinners in top Dublin restaurants and received millions from prominent businessmen.

SPORTING GLORY
The establishment of the IFSC also coincided with the rise of Ireland’s national football team, led by Englishman Jack Charlton.

Ireland’s qualification for its first major international tournament, the European Championship in Germany in 1988, is often credited with the start of the Celtic tiger, a phrase first coined in 1994 and attributed to a Dublin-based economist working for Morgan Stanley.

Ireland then qualified for its first World Cup in 1990, in Italy, and again in the USA in 1994. The Italian tournament was a particularly pivotal moment for the country and has been immortalised in a number of different songs, TV programmes, novels and films – none more so than the film adaptation of Roddy Doyle’s novel The Van.

By 1991, as Ireland’s national confidence grew alongside its economy, the Irish Funds Industry Association (IFIA) was formed. The founding chairman was Paul ‘Macker’ McNaughton.

A gifted sportsman, McNaughton had achieved fame as the first man ever to play three sports (rugby union, Gaelic football and soccer) in Ireland’s national stadiums.

At the height of his sporting career, which included 15 caps for Ireland’s national rugby team, he emigrated to Chicago in 1982 while working for IDA Ireland, the state agency that promotes foreign direct investment for Ireland. He went on to establish Bank of Ireland’s IFSC funds business before joining Deutsche Bank to do the same.

It was during this time that McNaughton became the first man to chair the IFIA as well as serving on the Irish government’s Task Force on Mutual Fund Administration. Consequently, he has been an instrumental presence in the growth of Ireland’s funds industry as well as its representative body.

The 1990s were a momentous time, not just for Ireland’s funds industry but for Ireland itself. Most notably, the Good Friday Agreement between the Irish and British governments was signed in April 1998. It was a major milestone in the campaign to bring peace to Northern Ireland and led to the formation of the Northern Ireland Assembly and a power-sharing executive that took office in 1999.

The same year, Gary Palmer was appointed as the association’s first chief executive. Not only did Palmer see the association through to the new millennium, he also witnessed the Irish funds industry reach maturity.

THE UCITS PHENOMENON
During the 12 years that Palmer held the office, Ireland’s funds industry grew from €71bn in assets to €1.9trn and cemented its reputation as a leading European funds domicile.

It was also at this time that the European Commission launched the first proper update of its Ucits fund vehicle, with Ucits III replacing the abandoned Ucits II update in 1998.

Two new directives were finally adopted in January 2002, widening the investment possibilities for Ucits users and signalling the start of much-increased investor interest in Ucits funds.

In 2003 there were almost 2,000 Irish-domiciled funds but just 286 were Ucits funds. By March 2015, this ratio had changed significantly – of the 3,606 Irish domiciled funds, 1,461 were Ucits. Prior to then, Ucits funds were more popular with non-EU managers than within Europe, especially US managers that saw the potential of the Ucits passport.

The emergence of Ucits and the use of fund passports was a pivotal development in the growth of Ireland’s funds industry and its establishment as a cross-border centre.

Purely coincidentally, Palmer’s tenure as CEO matched that of the Fianna Fail government, which won three general elections under the leadership of Bertie Ahern, between 1997 and 2008 before being displaced by a Fine Gael/Labour coalition in March 2011 and a new taoiseach, Enda Kenny, who has subsequently gone to become the first Fine Gael leader to serve two terms as taoiseach.

During Palmer’s time, Ireland also held a referendum on the European Union’s Lisbon Treaty. After initially rejecting the treaty, Irish citizens were invited to vote again and this time decided to pass the treaty, thereby demonstrating to other EU member states the proper way to hold a referendum on Europe.

Meanwhile at the IFIA, Palmer was replaced by Pat Lardner in April 2012. In addition to implementing new versions of Ucits, the IFIA also took a prominent role in implementing the controversial Alternative Investment Fund Manager Directive (AIFMD).

The directive was initially viewed as an overly political kneejerk reaction to the financial crisis of 2008 and an attempt by EU policymakers to punish the offshore hedge fund market for its perceived role in exacerbating the capital markets meltdown.

As negotiations between governments, regulators and the market continued, a more workable directive was passed in 2011 and then implemented by a number of member states in the summer of 2013, including Ireland.

Given that Ireland has developed a specialty for administering alternative funds, it was expected to benefit from both EU managers launching Aifs and also non-EU alternative managers wanting to set up a base in Ireland to take advantage of the AIFMD market.

NEW IDENTITY
While the Irish funds market was busy trying to attract alternative managers, the general public was busy recognising alternative lifestyles, becoming the first country to vote for marriage equality in a referendum in May 2015.

In June 2015, the association rebranded as Irish Funds, launching its new identity at the association’s annual conference. It stressed that the association had not changed but in a world of ever-increasing acronyms (the IFIA can also refer to the International Federation of either Inspection Agencies or Inventors’ Associations), it wanted to be clear and unambiguous about what it represents.

One of the association’s most important achievements over the past 25 years has been to support the creation of new fund vehicles and investment structures. One of the most successful vehicles devised by the industry has been the Qualified Investor Fund (Qif), which has become the vehicle of choice for fund promoters wishing to pursue non-Ucits alternative strategies such as hedge funds, fund of funds, private equity or real estate funds.

Since then, the Irish Central Bank has introduced a number of other fund vehicles, most recently the Irish Collective Asset-management Vehicle (Icav), which looks set to replicate the success of the Qif.

Given the changes that have taken place both in the funds market and Ireland itself, it would be foolish to speculate as to what the next 25 years will bring, especially when there is so much uncertainty in the air around the implications of Britain’s exit from the EU. What is more certain is that Ireland will continue to treasure its funds industry and recognise that it is the jewel in the country’s crown.