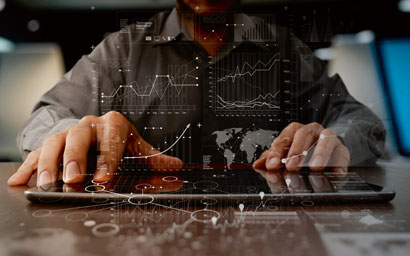 Ireland has ambitions to be a leading fintech hub. Funds Europe examines its credentials.

Ireland has courted the technology sector as much as it has the international financial services sector. Back in the 1990s when the International Financial Services Centre (IFSC) was recruiting international banks, custodians, administrators and asset managers, Ireland was also home to two of the top-selling tech companies, Dell and Microsoft.

Microsoft came to Ireland in 1985 and now has more than 1,200 full-time staff. It is currently building a €134 million campus in Dublin that will bring its full-time employees under one roof.

Dell, meanwhile, continues to expand its R&D teams in its Dublin and Limerick campuses, the latter charged with supporting its digital innovation and technology transformation projects.

In fact, almost every technology firm of note has a presence in Ireland. Apple announced in February 2015 that it plans to build an €850 million data centre in Athenry, Galway, the company’s first data centre outside of the US.

Facebook, which first came to Ireland in 2010, is building a data centre in Clonee, north of Dublin, which will cost €200 million and create 150 jobs. And Google opened a new data centre, also in Dublin, in June, bringing its investment in capital assets in Ireland to over €750 million.

TAXING BEHAVIOUR
Of course, the tax bills of all of these behemoths has come into question, notably Apple, which was ordered by the EU to repay more than €13bn in tax to the Irish exchequer – a decision that is being appealed, not by Apple, but by the Irish government. 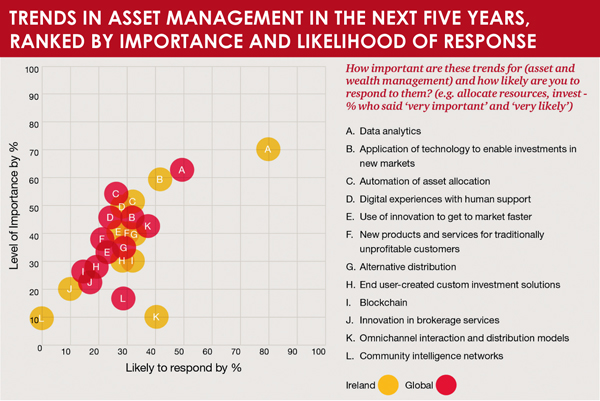 Favourable tax arrangements aside, the likes of Apple, Google, Facebook and Microsoft will all cite the availability of a highly educated workforce as one of the main reasons for being in Ireland, the same kind of arguments given by the financial institutions.

After more than three decades growing their presence in Ireland, it should be no surprise that finance and technology are coming together as it seeks to establish itself as a European fintech hub.

In September, PwC Ireland published the results of a study assessing the rise of new technologies in the Irish and global financial services sector. The study, the first of its kind by PwC, canvassed the views of more than 500 respondents from 46 countries, including over 50 from Ireland across all areas of financial services.

According to Olwyn Alexander, Irish asset management leader and partner at PwC, the study reveals some interesting insights for Ireland. “On the one hand, the impact of disruption is clear, with a quarter of Irish financial services organisations indicating that they believe they could lose more than 20% of their business to fintechs by 2020. On the other hand, with over two-thirds of respondents (69%) putting fintech at the heart of their strategy, Irish financial services companies are set for a fundamental shift in how they do business in the future.”

SHAPING THE LANDSCAPE
In terms of the asset management industry, the fintech focus is on the increased sophistication of data analytics to better identify and quantify risk. The proliferation of data along with new methods to capture is reshaping the investment landscape, says PwC. Furthermore, the study shows that Irish companies are more inclined to invest in these type of resources than their global counterparts (see graphic).

The new uses of data analytics are being employed at the retail and institutional level. The emergence of robo-advisers has been more closely associated with the retail wealth management market. In Ireland the likes of MyFutureNow, LifeSight and Rubicoin have targeted the personal finance market.

But, says PwC, the sophisticated analytics that use advanced trading and risk management approaches such as behavioural and predictive algorithms and are able to analyse transactions in real time are proving just as attractive to the institutional investment management market.

Besides automated investment advice and advanced analytics, fintech trends in asset management include technology like Blockchain, which can bring some efficiency to asset managers’ internal operations.

The fintech sector has significant state support as well. Enterprise Ireland, the business development agency, has a dedicated fintech team managing more than 220 start-ups, covering the full range of fintech applications – from crowdfunding to peer-to-peer lending, and from digital payments to online remittance.

In October, the minister of state for financial services, e-government and public procurement, Eoghan Murphy, led 12 Irish fintech firms on a week-long visit to China, Japan and Singapore to meet local and international banks, payment providers and stock exchanges. The delegation included several well-known Irish fintech firms such as Corvil, Fenergo, Fineos and Fexco. More than 20 Irish fintech firms are active in Asia Pacific and in 2015 generated more than €115 million there.

A RIVAL OF LONDON
Nevertheless, the focus is on growing Ireland’s domestic market and strengthening its credentials as a fintech hub to rival London. For example, Enterprise Ireland has just awarded another 10 fintech start-ups space and mentorship in its Dogpatch labs in Dublin’s Digital Docklands.

To date, the majority of venture capital has focused on payments, but in 2015, lending officially overtook payments as the primary source of fintech investment. There is increasing interest in B2B fintech ventures rather than consumer-led services. There is also increasing collaboration between banks’ own venture capital arms and the start-ups that are supposed to be their disruptors.

Challenges still remain for fintechs in Ireland as they do elsewhere – attracting venture capital, standing out from the competition and finding the right parties with which to collaborate. The successful fintechs to have come out of Ireland have generally been online payments providers Realex or Fintrax, or even aircraft-leasing firms like Avolon.

However, as we have seen over the past two decades or more as regards both the technology and financial services sectors, no Irish fintech is likely to want for state support.

And with an uncertain, post-Brexit future facing many of the start-ups in London, fintech may prove to be an important component in maintaining Ireland’s future as a successful, international funds centre.