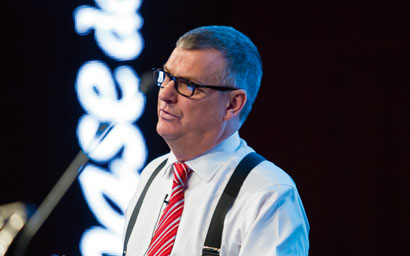 Stephen Kavanagh has been at the helm of independent financial adviser Chase de Vere since 2010. He says the company will remain independent.

“Independence, a bespoke high-quality service, and having a strong parent company. We believe in that wholeheartedly.” Stephen Kavanagh, chief executive of independent advisers Chase de Vere, is clear and confident in describing the features that he feels set the firm apart for its clients.

“We believe in independence, we believe in face-to-face advice and we provide that on a national basis,” he says. “Our clients like what we’re doing and we put them first in all instances.”

He stresses that this positive feedback comes in part from a strong relationship with the firm’s parent company, Swiss Life. “You’re part of a bigger organisation and our clients like that fact, the degree of security that Swiss life gives us.

“We are really, really bullish about what Swiss Life calls the ‘medium-term planning’,” he adds. “I’ve advised our parent company that 2016, 17 and 18 are going to be the three most exciting years this company has had for the last 20.”

Despite his optimistic outlook, Kavanagh readily admits that it hasn’t all been plain sailing for Chase de Vere in recent years. The firm has undergone a number of changes, alongside the overall shift in the advisory market following the introduction of the retail distribution review (RDR) at the end of 2012.

“Five years ago, what we didn’t have was a proposition that was defined at all,” he says. “At that point we had 180 advisers and 180 different propositions.”

Upon being appointed chief executive in 2010, from his role as sales director, Kavanagh’s primary focus was to develop a clear strategy that all employees could follow and he says understanding the value of this
is the biggest lesson he has learned in the last five years.

Part of this process meant being fully prepared for the new regulation: “We launched [our proposition] very early in March 2011 and we tried to be RDR-friendly well ahead of the game.”

He says that this has been an advantage for the firm. “We found that clients have been delighted to pay fees as long as they’re getting what we promise, which is quality independent advice on a face-to-face basis.”

Chase de Vere offers a combination of hands-on involvement from senior leaders and plenty of opportunities for staff and clients to give feedback, to ensure that the firm stays on track. “We do listen and I like to think that we have moved forwards as a collective,” Kavanagh says.

“The greatest influences on our business are without question our advisers, our managers and our staff in the offices; they tell us what direction we should be going in. They assist us, they give us pointers, and they tell us what clients want.”

He adds that this open discussion is something he has fostered from the moment he took up the chief executive role.

“At the very outset five years ago, I said: ‘Please, let me know what’s going on, what do you think could be better, if we’re doing things wrong please shout from the rooftops!

“I think out of the 440 staff that we have, I know probably 400 of them by their first name – I go out to see people every single week…

“Every now and again you hear some gems, and that’s what influences our business.”

Although Kavanagh’s understanding of Chase de Vere’s successes is well defined, he is also open and direct in discussing the firm’s shortcomings and is ready to explain how these elements will be improved in the future.

He highlights appointing the right quality of advisers as the most immediate challenge. Up to this point, the focus has been on expanding the business organically rather than by acquisition, and now the task is
to find the right hires to boost this progress further.

“We are going to need a number of advisers with the right qualities who can slip straight into an independent model,” he says.

As the firm takes on a forward-looking approach, Kavanagh is also focused on improving back-office operations, with a particular focus on more digitalisation.

“We have too many people touching too many pieces of paper too often,” he says, adding that leaving this unchanged would hinder any further expansion for the firm.

“Everything is about the future, rather than trying to tidy up the past, and one of the things that we’re going to do over the next six to 12 months is spend a bit of money, time and effort on sorting the operations in our offices and centrally, hopefully to enhance the service.”

He believes that when it comes to digitalisation, Chase de Vere is “behind the curve”, but is determined this will not be for long. “That is one thing that we need to respond to. We have a team in place and it’s probably an 18-month project for us.”

Kavanagh is confident that Chase de Vere is well prepared to make these changes, and feels that the opportunities that lie ahead for the firm have been the result of a determination to respond to the demands of clients and be true to the firm’s defined strategy.

Although he is unable to reveal details just yet, he says the firm has a number of significant developments in the pipeline, which he sees as “game-changers” for Chase de Vere. “We’re hugely excited. These opportunities have come because we’ve remained independent; I’ve no doubt about that. Independence has been the driver.”

As a result of this commitment, Kavanagh also says the firms will avoid getting drawn into industry trends. While he sees an overall movement towards guided architecture, he is adamant that this will not be the case for Chase de Vere.

“As long as I’m chief executive, we will provide bespoke independent advice tailored to our clients’ needs, so for us, we will not be moving to guided architecture.

“We appreciate that independence is more expensive to run from a regulatory perspective, but that’s what our clients have demanded and that’s what we will provide.”