Research of advisors globally reveals how the industry feels about its changing landscape. There is much uncertainty, of course, but one thing is clear: advisors are not fretting about examinations.

Since the financial crisis of 2007/08, the financial services sector has been under pressure to demonstrate more professionalism. This applies as much to individual financial advisors as it does to banks as corporate entities. Regulators are more exacting in their policing today. Gone are industry self-regulation and voluntary best practice codes. Instead, we have now sharp-toothed regulators wielding standards that are being more aggressively applied than ever before in the interests of consumer protection and market stability.

Aligned with this is an ever-growing web of regulation stretching across the globe, from the Retail Distribution Review (RDR) in the UK, to the Future of Financial Advice Act (Fofa) in Australia, and the forthcoming Markets in Financial Instruments Directive II (MiFID II) in Europe. If transparency is the order of the day, then there’s now more than enough red tape with which to wipe the fog off the windows.

But while these changes are being made with the commendable aim of satisfying clients’ right to honest and fair financial advice – while hopefully boosting investor activity in the retail market along the way – there have been considerable affects on those whose job it is to provide financial planning.

Researchers, sponsored by Investec Asset Management, surveyed financial advisors around the globe and found that 59.7% feared that regulatory pressure and requirements would pose a challenge to the growth of their business over the next year. 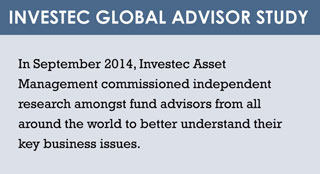 Indeed, if the world’s advisory industry can be characterised by one word, it is “uncertainty”. Uncertainty is what no business needs – especially when the economy is already providing enough. According to the research, which drew opinion from 80 advisors across five regions (representing firms with assets under management of over $20 billion) regulation was the one factor that advisors found by far the most challenging. The second-biggest fear centred on pricing pressure, which is itself a result of added regulation. There are innumerable costs in reforming working practices to meet new standards, as well as the extra burden of record-keeping that the new standards entail.

FORCED CHANGE
Perhaps the largest upheaval sparked by the raft of new regulation comes with the banning of commission payments. Pricing models have been forced to change, with the removal of commissions and the introduction of fee transparency. These issues were discussed at Investec’s Global Advisor Forum (see separate article), where one conversation centred around the price war that has emerged in the Netherlands since regulators insisted on fee transparency there. Fears were raised that a similar price war could potentially erupt in other markets, where regulations are also tightening.

What’s undeniable is that sources of advisor income are undergoing great change. As of last summer, commission must be passed on to the customer in Germany, while in France the regulator is supporting a ban on inducements for discretionary portfolio services and is looking for greater disclosure of commissions across all savings products. Similar changes are occurring everywhere from Switzerland to Singapore. Only 17.9% of respondents said that regulatory pressure and requirements wouldn’t pose a challenge to their business growth. These are outfits that have either made their adjustments already – or are ignoring the scale of the problem altogether.

For these businesses it seems there really is little choice: they’ll have to either evolve and restructure soon, or simply stop giving advice at all. Since the introduction of the commission ban and the RDR regulation the number of investment advisors in the UK has fallen to around 29,000, down from 38,317 in December 2011. Businesses have been forced to refocus their offerings around this greater requirement for disclosure and advice.

The loss of commission has forced a shift away from product push towards more holistic advice, which requires a huge shift of consciousness. Investec’s Global Forum heard from one advisor who said his company had to “absolutely change the culture and the skillset of the people that deliver advice”, moving from product push of the commission-driven system to the more holistic approach.

Yet it seems that reforming a business needn’t necessarily be a recipe for disaster. Some 37.3% of respondents said the shift in demand from a product approach to more solutions-based advice wasn’t hard. This suggests they’ve restructured their business in response to the changing appetite displayed by investors. One advisor has reported that his business reduced from 92 advisors to just less than 45, a cut driven by the need to deliver both an asset management and a financial planning business. These days the pressures on a pure advice-driven business are potentially insurmountable.

Forty per cent of respondents said that producing performance reports wasn’t an issue. So it’s not the reporting requirements of new regulations that’s the problem, but the changing landscape contains plenty of other hurdles for advisors to navigate. The cost element is clearly an issue, as is market performance and volatility reported by 37.3% of respondents. Client retention and satisfaction, more sophisticated competition and staying on top of new investment products and strategies are other key issues.

But as well as ascertaining wider business concerns, researchers also quizzed advisors on what they see as the biggest challenges from a personal perspective. The problem of stimulating client engagement was found to be the most challenging, cited as a key issue by 31.9% of respondents. Clearly, people knowing that they need to save still does not easily translate into them actually doing anything about it, and the industry’s on-going battle to capture people’s attention and establish a proper understanding of financial issues earlier on in life remains an uphill struggle.

EXAMS – NO CONCERN
Reassuringly, it seems meeting the rigorous new standards isn’t such a problem on the individual level: 63.8% of respondents claimed the passing of tougher new examinations was of no concern. This was another topic touched upon at the Advisor Forum that heard that stricter qualification requirements may have an effect on the age structure of financial advice. Older advisors may baulk at having to pass new tests to continue their practice, and consequently leave the industry, attracting younger people in to follow fund management advice as a career. Younger people may also be drawn in further by the rapid rise of technology in the industry.

Again, this is a shift in the business model that companies will have to work out.

So is the issue of consolidation. There is a notable dash for scale in the advice industry, and the cost of remaining independent is also a clear challenge for advisors, affecting 30.4% of respondents. As one attendee of the Advisor Forum pointed out, the universe of wealth management is set to see a lot more much larger businesses, and small but very effective boutiques.

As for respondents’ views on the retail advice industry’s cost structure, the majority of respondents felt that the average cost of funds (1.62% for equity funds globally, and 1.22% for a fixed income fund) was appropriate. But should any part of the model need to be squeezed further then it seems the platform charge is most likely. Some 28.3% of respondents found platform charges to be inappropriate (compared to 24.5% claiming the fund manager charge was too much, and 11.3% thinking the same of the advisor charge). Respondents believed that platform charges should be decreased by 21 basis points, on average.

The thought of squeezing costs any further will not be a comfortable one for many practitioners, especially given the obvious added burden of regulation. But while that in itself adds to the pressures, it’s clearly a necessary shift for the industry. Anything that benefits clients in terms of clarity, trust and professionalism will soon come to benefit the wider industry too – even if those benefits aren’t entirely transparent just yet.