Investment managers are explaining how to deal with Solvency II, the tough capital-adequacy rules for insurance companies. Convertibles, emerging market bonds and derivatives could be sought-after assets. By Nick Fitzpatrick

Einstein’s general law of relativity reveals that a dense cosmic object, such as a star, will change the shape of another object’s orbital path if its gravitational pull is strong enough. When the dense piece of insurance regulation called Solvency II comes out of the European parliament next year, it could have the same effect on the shape of the yield curve.

This is just one of a number of possible impacts the regulation will have on the way insurance assets are managed, and fund managers that have recently studied the impact, say a more dynamic form of investment management will be required for insurance investment portfolios.

Other impacts include making it more expensive for insurers to invest in equities and property, because riskier assets have steeper capital charges applied to them. There is also likely to be an increase in demand for hedging products structured with derivatives.

The capital charges are designed to force insurers to build up greater sums of cash on their balance sheet, forming a buffer against insolvency. This means there is a direct link between the assets insurers invest in and the level of their balance sheet equity.

Elodie Laugel is head of financial engineering at Axa Investment Managers, the asset manager owned by French insurance giant Axa. She explains that if an insurer invests €100 in developed-world equities, it needs an additional €40 for its own balance sheet equity to provide a buffer against the extreme loss scenarios described by Solvency II.

In other words, under the new regime equity investment will take a 40% capital hit.

“Equity is one of the most challenged assets. The capital charge for emerging markets and private equity is around 49%,” she says.

“Also, where corporate bonds are concerned, the longer the credit duration is, the higher the capital requirement.

Therefore companies will be incentivised to go to short-dated names instead, and this could impact the yield curve as far as credit is concerned,” she goes on.

Solvency II considers an insurer’s insolvency risk from four different perspectives. The one most relevant to asset managers is market risk.

The regulation contains a value-at-risk model that is exacting. It requires insurers to be solvent – in other words, to be able to pay out on policies – even in the type of extreme event that could happen perhaps just every 200 years.

“Insurance companies have already computed their estimations,” says Laugel. “The result is that most companies will have a lower solvency ratio. Most won’t be considered solvent.”

There is now much research by insurers into how they could “de-risk” their balance sheets under Solvency II, which is slated to come into force in November 2012 (though it will probably be delayed). The size of the asset pool potentially affected is huge. According to the CEA, the European insurers’ body, investment by European insurance companies totaled €6.5trn in 2008, the last figure available.

Accessing all areas
Not surprisingly, a more dynamic approach to insurance asset management puts the capital charge at the front of decision-making. This is partly because of the challenge for insurers to keep their capital cost down. Whereas a parent company, in order to increase its buffer against extreme loss, might currently be able to issue a bond paying a five to six per cent coupon depending on its credit quality, the cost to the parent company of funding a subsidiary could be more.

“A 15% target over a cycle was one figure mentioned a lot at a recent conference,” says Erinn King, senior vice president at Payden & Rygel.

Property investors appear split over the outlook for real estate. Hans Vrensen, global head of research at DTZ, says the current state of the lending market provides an attractive opportunity for more non-bank lenders to enter and expand into the UK and continental European commercial property sector.

“Based on speaking with our clients, we believe Solvency II might free up some insurers to start or expand their commercial real estate lending platforms, while being forced to review the long-term feasibility of their equity investments in commercial property,” he adds.

But Matthias Thomas, CEO of Inrev, the association for investors in unlisted real estate funds, expects a re-allocation away from property (see box).

Fixed income has the lowest capital charge out of the main asset classes, and this means there will be more focus on this sector – even to gain equity exposure.

UBP, the Swiss private bank, says that for efficient equity exposure it favours arbitraging between convertible bonds and equities, as convertibles carry the lower capital charge.

Dominique Leprévots, who heads the French office of UBP, says, “Convertible bonds seem the best type of investment for an insurance company to keep an equity exposure.”

The increased technicalities of fixed-income investing are an opportunity for managers with the right analytical skills, says King. At Payden & Rygel, they expect bond portfolios will be optimised on the basis of the capital charge as well as the more traditional risk-return factors.

“Under Solvency II, an insurance company has to make a break-even analysis for every bond it buys. For example, US Treasuries have no capital charge, but low-quality bonds and long-duration corporate bonds entail higher capital charges.

Emerging markets
Leprévots, at UBP, says that for corporate bonds, the key parameters taken into account to calculate the solvency ratio are the duration and the rating, irrespective of the issuer’s country, and this means emerging-market corporates may find favour with insurance investors.

“Currently, there is a yield pick up on corporate emerging bonds in hard currency versus corporate bonds of local issuers with the same rating,” he says.

“As a result of this, there is an incentive to invest in emerging bonds versus local bonds. This arbitrage leads to an increase of the yield-to-maturity of the portfolio with a decrease of capital required.”

Multi-national insurers that are seeing business in the emerging markets grow may discover an appetite for emerging sovereign bonds. Where an insurer has liabilities denominated in, say, the Brazilian real, then a Brazilian government bond becomes potentially very attractive.

King, at Payden, says, “On a capital-adjusted basis, local currency sovereign bonds, in particular emerging market bonds, are more attractive relative to corporates of similar credit quality. This is particularly the case if an insurer also has liabilities denominated in the local currency. Increasingly, emerging markets have been an area of growth for insurance underwriting, making local currency sovereign debt all the more attractive under the Solvency II framework [as it’s currently defined].” 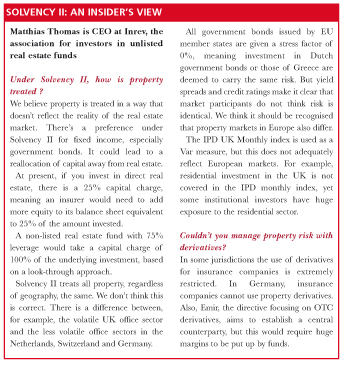 This changing approach mirrors a fundamental change to the aims of insurance asset management. King says, “At its core, Solvency II is about the better management and alignment of assets and liabilities. Before Solvency II, the focus was on underwriting risk, but now it is more on matching investment assets with insurance liabilities.”

But what if you want to keep exposure to an expensive asset class? This is where derivatives can come in.

Laugel, at Axa Investment Managers, says, “If you want to keep an asset class that looks expensive, then you either have to cut exposure or use a structured solution with extreme-event protection instruments like out-of-the-money options or derivatives.”

She says that in the Solvency II framework, these types of instruments are well-recognised and asset managers managing for an insurer will be incentivised to use more and more derivatives techniques to efficiently manage capital.

“Using these brings some complexity regarding accounting rules, so investment managers will need the skill to explain to an accountant that this type of instrument is well positioned in an accounting report,” adds Laugel.

The ability to report to insurers is a major requirement highlighted by Axa, Payden and UBP. It’s not just about being able to use these instruments and strategies, but also the ability to talk about them.

Investment managers might not be able to protect insurers from all types of crisis, such as ships sinking or cosmic objects knocking Earth from its orbit, but the new regulation gives them an opportunity to play a more meaningful role in the insurance asset management sector.

The new regulation is also a good example of how one crisis, the financial one, has led to new opportunities in asset management.