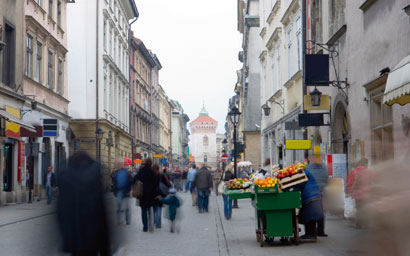 A growing level of sophistication about financial instruments in Poland has seen investment and insurance funds grow as a proportion of household savings. There is also an appetite for risk, says Grzegorz Kaliszuk, a manager at Allianz Bancassurance.

Over 153 billion zloty of Poles’ savings replenished the Polish state budget within an hour when money was transferred from pension funds to a social security fund following a controversial accounting procedure at the beginning of 2014.

However, almost every seventh zloty out of 1.08 billion zloty of Polish household savings are invested in collective investment instruments – namely investment funds, in which households have accumulated more than 94 billion zloty, and insurance capital funds, whose value exceeds 51 billion zloty.

According to data at the end of December 2014, the value of all assets in Poland – including non-retail investment funds – exceeded 209 billion zloty, or €49 billion. In this case, ‘non-retail’ means closed-ended funds with, in the vast majority of cases, an enterprise’s own capital in it. These are non-public assets and represent about one-third of the total value of the investment fund market in Poland. These funds send a very clear signal that Polish entrepreneurs are looking very actively for effective ways to multiply a company’s capital and to optimise income tax. The average quarterly growth rate of non-public assets from December 2010 until today is about 10%.

INVESTMENT FUNDS: HIGH RISK
In the Polish market, funds with a high investment risk still hold a very large market share. Mixed assets and equity funds combined account for 44% of the retail market and almost one-third are debt funds. Money market funds account for 17% of market value and the remaining 10% embrace capital protection, real estate, absolute return, securitisation funds (which invest assets into private debt) and commodities. Bond funds are noteworthy because these brought an average gain of 7% last year – twice as much yield compared to rates on bank deposits.

In fact, such high returns on relatively safe funds comes from discounting a drop in interest rates long before a significant decline in rates and, therefore, the profitability of Polish treasury bonds. Currently, the reference interest rate – the seven-days bills yield – is the lowest in history at 2% (in February 1998, it was 12 times higher). A further decline in rates is expected in the first quarter (Q1) 2015. During Q4 2014, Poland experienced deflation, hence the main prerequisite for maintaining interest rates at a certain level temporarily disappeared. From this perspective, corporate bond funds can see much interest today. In fact, in these funds the investment risk is considerably reduced by a significant dispersion of fund portfolios.

Investment fund assets increased over the past six years three times in Poland. In February 2009, the asset value fell to its lowest level since it had peaked in October 2007. In just 16 months, the asset values of investment funds shrank by almost 52%. But confidence in this form of saving was thoroughly rebuilt over the next six years and investment and insurance capital funds amount now to almost 14% of the value of household savings, having increased during this period at an average month-on-month rate of 1.6%.

Over its 22-year history, the Polish investment fund market has seen the number of funds reach 880. These are managed by 41 investment companies controlled by the Financial Supervisory Board (FSB).

The first Polish insurance capital fund was established in 1993, a year later than the investment fund. Commercial Union and Nationale Nederlanden were the first in the market, which is now worth about 51 billion zloty. This is the same as what the Polish government intends to spend in the next decade to build Poland’s first nuclear power plant.

European directives and regulations play an increasing role in Polish law, too. The most important source of European legislation for the insurance market is the Insurance Mediation Directive II (IMD II), submitted at the end of Q1 2014 and part of the so-called ”consumer package” that also includes Ucits V and Prips. To achieve even greater transparency for customers, the IMD II regulations are to be extended to sales employees of insurance companies.

The goal of Prips is to eliminate the regulatory patchwork that treats similar financial products in different ways. Prips has created the Key Investor Document, which in a Polish context is called the Product Charter.

There are currently more than 2,100 insurance capital funds in the Polish market. Investment strategies are normally more aggressive compared to retail investment funds, with as much as 57% of the value of assets in equity and mixed funds, 16% in debt funds, 20% in capital protection funds and the remaining 7% in cash, securitisation and absolute-return funds.

The unit-linked insurance market in Poland is highly concentrated. Among 24 insurance companies offering unit-linked products, only four are meaningful as they account for more than half of the market. The top seven insurers represent about 75% of the market (more than 37 billion zloty).

POLES’ POSITION
Investment funds and insurance capital funds are more and more important in Polish household savings. As a result of their tortuous history, Poles did not have the opportunity to learn about modern financial instruments for many years. Today they are unable to function without them. A key role in that phenomenon takes education and growing customer awareness.