A new class of hedge funds focuses on hedging against extreme market events, or tail hedging. However, there are uncertainties, says Lance Teitelbaum, meaning a diversified approach is critical.

The banking crisis in 2008 served as a painful reminder of the negative impact of extreme market events on investor portfolios. The impact of these so-called tail events is often all the more damaging because traditional portfolio risk management techniques – diversification and beta hedging – can fail during these periods, at precisely the moments they are needed most.  This is driving an exploration into more effective methods of hedging tail risk, giving rise to a new class of hedge funds designed specifically for this purpose.

Failed diversification
Many portfolios incorporate some protection against market risks, such as declines in equity markets or increases in interest rates. The most common risk management technique is asset class diversification. Basic portfolio theory tells us that the addition of uncorrelated assets can reduce the overall level of risk within a portfolio. In most market environments, this is the case – losses from one asset class are mitigated by the performance of others.

However, during a tail event, diversification often fails as correlations between asset classes increase substantially.  The chart (Figure 1) shows this phenomenon. In the period leading up to 2008, for the most part asset classes behaved differently from one another. But in 2008, asset classes fell rapidly in unison, negating the benefit of diversification.

A second risk management technique used by some investors is referred to as “beta hedging”. Investors will actively hedge their market risk exposure by allocating to protective short positions. For example, an investor may buy credit default swaps (CDS) to limit credit risk in a bond portfolio.

The problem with beta hedging is that the normal relationships between securities often break down during tail events due to technical factors. The other chart (Figure 2) shows the spread between the yield of cash bonds and CDS. In normal market conditions this differential is typically around zero. However, during the 2008 market crisis, investors became forced sellers of illiquid corporate bonds, resulting in a material differential as bond portfolios lost more than CDS made.

Serious problems were caused by the failure of equity and credit beta hedges to perform as expected. These problems were compounded by losses that beta hedges had not been designed to protect against, such as frictional costs, financing costs, and counterparty risks.

Hedging against tail risks
Market risk is typically limited in scope, contained within one or more asset classes, and sometimes predictable. In contrast, tail events are typified by their unpredictable nature, magnitude of effect, and the breadth of impact they have across asset classes (that is, they are “systemic”).  While the 2008 banking crisis is the most extreme market event in recent years, there are a number of other examples that have tail-event characteristics, such as the Russian debt default crisis in 1998, the September 11 attacks, and most recently, the sovereign debt concerns in mid-2011.

What kind of tail hedge would protect portfolios against these events?  We believe any such hedge needs three key characteristics. First, the hedge should have a substantial payout during a crisis event.  Second, there should be a high certainty that profits from the hedge can be monetised. And third, the cost should be low enough so that the hedge can be maintained on an ongoing basis.

Traditionally, the most common hedges against tail events were passive. For example, buying out-of-the-money S&P 500 puts and rolling them on a predetermined schedule. Such strategies can accomplish the first two tail hedge goals – they should have a high payout, and profits can be monetised.

However, with this S&P put strategy, the cost of the options is usually too high to allow a sufficient hedge. The simplicity of this hedge means it is widely used – driving up costs and lowering effectiveness.

But the cost of the hedge means that most investors will not incorporate it at sufficient levels, leaving their portfolios exposed to tail risk.

To overcome the hurdle of high carrying costs versus the hedge payout, we believe one must turn from passive hedging strategies to active ones.

A new class of hedge funds
In recent years, hedge fund managers have seized upon the opportunity to offer actively managed tail-hedging solutions. On first glance this seems counter-intuitive.  Hedge funds are seen as vehicles for generating absolute returns, as opposed to incurring a carrying cost in the hope of a future payout. But looked at from a different perspective, we believe it makes perfect sense.

The same research and trading skills that hedge fund managers apply to delivering the upside can also be applied to managing the downside. In fact, in our experience, most of the best hedge funds produce returns specifically because of their risk management skills.

Tail hedge funds focus on three investment goals: delivering convex payouts (that ratchet up exponentially in a crisis); capital efficiency (tying up as little capital as possible); and reducing the cost of hedging (that is, minimising how much the strategy costs to run).

To accomplish this, managers seek out hedging trades that are undervalued by the market, often because they require skill to identify and construct. What these strategies have in common is that they are actively traded – meaning the manager will generate alpha that can offset some of the negative carry. In addition, sophisticated managers can sometimes find trades with positive optionality that do not involve any upfront cost.

We estimate there is a universe of approximately 100 managers currently offering investors some form of extreme downside protection. Within this universe, we believe there are currently 20 or so managers offering high-quality approaches.

This is a number sufficiently large for investors to take diversified approaches to tail hedge solutions.

The nature of extreme market events means that they are unpredictable. A hedge may fail in one crisis, and work spectacularly well in another.  The key factor is the closeness of the hedge to the catalyst of the crisis. For example, a short subprime residential mortgage-backed security hedge would have delivered a payoff that dwarfed most other hedges in 2007/8. 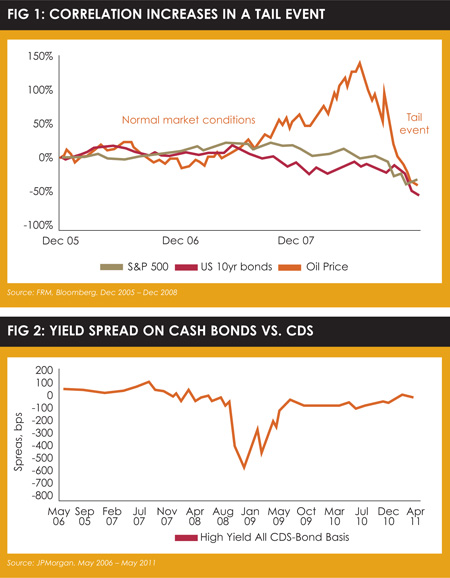 Diversification in tail hedging
For this reason, diversification is a critical aspect of tail hedging, and the size of the tail hedge fund universe now allows this. By investing in a number of tail hedge managers with different strategies and trading different asset classes, one increases the chance of holding a hedge tied to a market crisis catalyst. Also, diversification reduces exposure to hedges that will be ineffective (thus increasing the certainty of payout). Further, the addition of this basis risk to the hedge portfolio (relative to the underlying investor portfolio) should reduce the cost of the overall hedging strategy, since there will be flexibility to rotate hedges based on their relative value.

Another advantage a larger tail hedge fund universe provides is customisation. Each tail hedge fund has a unique payoff profile, and they can be combined to address specific portfolio risks. For example, is an investor’s goal to protect against overall portfolio losses of more than 5%? Or is it to make a minimum capital gain of 200% on invested capital during an extreme sell-off in bond markets?

Lance Teitelbaum is the ­managing director at Financial Risk Management