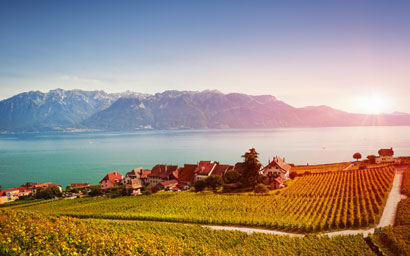 As the cost of living there has risen, the trend of investment managers moving to Swiss cities has slowed. But in terms of work/life balance, parts of Switzerland are becoming increasingly attractive, says Christopher Cruden of Insch Capital.

Last summer, one of the populist British newspapers ran a story saying Nico Jackson had quit his job with a bank in the City of London and was moving to Geneva to join a hedge fund. This information would have been of no great interest to the newspaper’s 1.7 million readers had it not been for the fact that Mr Jackson was Pippa Middleton’s long-term boyfriend and Miss Middleton is, of course, sister to the Duchess of Cambridge.

Leaving aside Mr Jackson’s indirect royal connections, the news of his forthcoming emigration was also significant from a financial perspective, given the reasonable assumption that the move was prompted by monetary considerations rather than an attempt to better – according to the newspaper – the high-society lifestyle he enjoyed in London.

These days, few investment managers are transferring to Switzerland exclusively for commercial gain. The flow that started at the beginning of the millennium has now reduced to a trickle and is, in some cases, turning. For example, in recent months a mid-sized Geneva-based alternative manager of towards $400 million (€372 million) has revealed plans to move to London.

The reasons are not hard to find. A 2010 survey conducted by the Zurich School of Management and Law (ZHAW) reported the majority of those who came to Switzerland did so seeking lighter taxation (rather than regulatory convenience). But Switzerland’s fiscal attractions, particularly in the two biggest cities, are not what they were – or were perceived to be – and life is becoming more expensive. Indeed, a March 2015 report from the Economist Intelligence Unit listed Zurich as the fourth most expensive city in the world to inhabit (behind Singapore, Oslo and Paris); Geneva ranked seventh.

Despite these statistics, some investment managers, commodity traders and other financial professionals are continuing to make the move to the Swiss Confederation and are doing so for whole-life rather than just monetary reasons.

PLAYGROUND IMAGE
Commentators tend to see Switzerland as an integrated whole, but this view is flawed. The country’s federal structure means each of the 26 cantons applies a different tax system; its history means there are four official languages (including Romansh, spoken predominantly in the southeastern canton of Grisons, also known as Graubünden); and the diverse geography means it is not simply the winter sports playground that tourist brochures would have one believe.

Switzerland is diversified financially, linguistically and geographically. Likewise, its investment management industry is broadly spread, leading to considerable choice for individuals and groups seeking to establish their homes and businesses here.

The ZHAW survey lists a series of hedge fund locations centred on five cities/towns in five different German-speaking cantons. One is Geneva in the francophone part and another is Lugano, ranked third overall for alternative funds, in the Italian-speaking canton of Ticino.

The least familiar of the top three, Lugano, is of increasing interest to those in the investment community seeking a desirable work/life balance, since it combines what has been described as Italian style and Swiss efficiency with significant financial muscle.

As the survey reminds us: “Over 70 banks are active in the canton of Ticino. The financial sector has consistently grown since 1950. In the past the region had mainly attracted Italian offshore money. Italy’s third tax amnesty (and the signature in February 2015 of an agreement between Switzerland and Italy finally to end banking secrecy) aimed at bringing funds back to Italy by April 2010 has been less harmful to the canton of Ticino than originally expected.”

At the same time, this most southern of Swiss cities is substantially warmer than elsewhere – and more compact, which means many residents walk or cycle to work.

Five years on from the ZHAW survey, there are no specific statistics on the number of hedge funds in and around Lugano, although the cantonal group, Ticino for Finance, was quoted as saying in 2013: “The region currently boasts up to 40 hedge fund firms with more than 10 billion Swiss francs in assets under management, around half in single-manager funds, and combined annual turnover exceeding 200 million Swiss francs.” At present, the only certain figures are those released by the Centro di Studi Bancari (a Swiss banking school). These suggest that in Ticino there are more than 200 firms, including hedge funds, active in fund management.

Many of these are of course domestic, with the majority founded or run by Swiss (or neighbouring Italian) nationals. Fine, but what of the others? Given that today, tax and related financial incentives have eroded, is it just the quality of life (and the comparatively lower cost of living) that is prompting the growth in the foreign investment management community?

ON THE RIGHT TRACK

One major driver is the massive investment Switzerland is making in the region’s transport infrastructure. Even today, the Italian commercial and financial powerhouse of Milan is only an hour away and motorway links to the major international airport of Malpensa have recently been significantly improved. However, these developments pall when compared to the AlpTransit rail link, which is shortly to slash travel times to Zurich (and Zug) by half, to some 90 minutes.

AlpTransit is the largest infrastructure build Switzerland has ever known and, as of May 1, the principal elements are less than 400 days from completion, according to the scheme’s website. This project – designed to allow 250kph trains to shuttle between Zurich, Lugano and parts south – has at its core the sub-Gotthard tunnel, which at 57km will be the world’s longest railway tunnel. On its own, it will have cost some 10 billion Swiss francs (€9.65 billion).

In short, it looks as though investment managers are favouring an area where the Swiss people have also committed extensive investment, building an ‘investment triangle’ between the country’s three core financial centres and attracting a new generation of businessmen for whom la dolce vita – the sweet life – is as important as financial gain.