The financial crisis has ushered in a new era for managers of managers, believes Joanna Munro of HSBC Global Asset Management...

Funds of funds (FoFs) have always been a more popular approach to third-party fund investing for retail investors than managers of managers (MoMs). Retail FoFs grew by 19% globally in 2007, with inflows of US$200bn (€135bn) dwarfing retail MoM inflows of $28bn, according to Cerulli Associates.  However, following the market dislocation involving the Lehman Brothers collapse and in a world where Madoff has changed the landscape for third-party fund investing, we expect there to be more focus on the MoM structure going forward.

Lessons learnt
Changes in the fund environment started in 2007 and accelerated in 2008. The first signs were the issues for liquidity funds, triggered in August 2007 when the asset-backed securities market froze and a number of money market players were unable to price their assets and had to suspend funds. Although the US government stepped in to show support for money market funds, investors were left feeling shocked that some of the funds, believed to be at the safest end of the spectrum, were actually not able to deliver either the daily liquidity or the constant NAV that had been expected.

As liquidity evaporated from many parts of the markets, hedge funds operating in illiquid strategies started to implement the ‘gating’ schemes their prospectuses allowed, but that had rarely been invoked. In November 2007, direct property funds from mainstream houses suspended redemptions as large-scale outflows combined with an illiquid underlying market.

In October, following the Lehman collapse, a number of investment-grade fixed-income funds indicated unofficially that they would not be able to meet redemptions beyond a certain size. These difficult times for mutual funds culminated in the Madoff scandal, which infected feeder funds, the fund of hedge fund industry, and even impacted the Ucits environment.

Issues with third-party fund investment that came to the fore amid this changing asset management landscape centred on transparency, illiquidity, valuation – including dilution levy issues ­– and due diligence.

How these affected multimanagers
Transparency: By the end of 2008, it was questioned whether FoFs could deliver the necessary transparency. Certainly, with volatility around individual names, the arm’s-length risk management of FoFs became a concern – FoFs didn’t know how much exposure they had to a specific financial stock or security until valuations were received. They might not even know if their FoFs was overweight or underweight a particular sector at a point in time. An issue that was difficult to avoid was that, however willing a third-party fund manager and however significant their relationship with the multimanager, they weren’t allowed to give one investor in the fund any more information than another.

Illiquidity was another issue that emerged during the market volatility as a number of funds were suspended (or gated), meaning no (or limited) redemptions were allowed.  Historically, FoFs handled concerns about illiquidity by putting limits on their exposure to individual funds and on the percentage of a fund they could own – the concentration.  However, when an entire asset class becomes illiquid, then there is contagion from fund to fund and diversification doesn’t solve the liquidity problem. As one example, direct property funds generally went illiquid at the same time as they were exposed to the same underlying market conditions.

Valuation: When a fund is suspended, valuations may not be available so the fund becomes impossible to value. Even where a valuation is available, in illiquid markets, funds may adopt very different policies with respect to pricing. One way managers tried to manage redemptions fairly in illiquid markets was by imposing ‘dilution levies’ – passing on the cost of liquidating assets in a ‘fire sale’ to the redeeming investors – but even here, there were a whole range of methodologies that could be applied, leading to very different outcomes in terms of redemption proceeds.

Due Diligence:   In a stable environment in a highly regulated industry, one of the most cost-effective ways of selecting funds has been to use a quantitative screen on past performance and a number of providers supported this approach.  However, the importance of  proper due diligence on the underlying fund management group (FMG) was reinforced following the lessons learned in the turmoil. This involved ensuring an FMG was financially stable, had the appropriate risk and compliance functions and the right culture toward risk.

Benefits of MoM in the new environment
Given the importance of these issues for investors in third-party funds, the benefits of a MoM approach are becoming increasingly appreciated. With a MoM, the multimanager team has transparency, has clarity on the liquidity of the underlying assets and on the valuation policy and can ensure an appropriate approach to dilution/pricing in illiquid markets to protect all investors. Although due diligence at the FMG level is theoretically less of an issue, given the appointment of the independent custodian and the effective control of the assets, in practice, the process of appointing managers for a MoM, with the signing of an investment management agreement, tends to lead to more, rather than less, due diligence.

In addition to being the norm for hedge fund and absolute return strategies, speed of reaction is one area where direct third-party fund investment can be a better approach than MoMs. An additional challenge during the turmoil centred around speed of transition in a rapidly changing world – with merger upon merger creating uncertainty about the future of different teams. A fund can be quickly taken out of a portfolio – and subsequently added back, once the dust settles – while taking a team out of a MoM programme will need more consideration as, even where reserve managers are already signed up, this is not a cost-free decision. 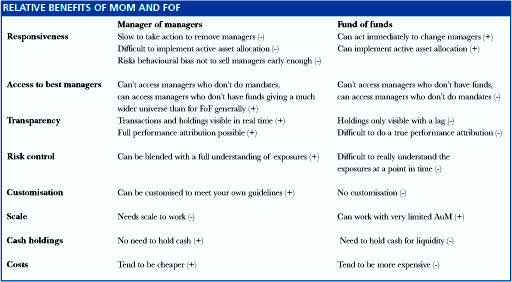 Way forward for multimanager products
Given the relative strengths of MoM and third-party funds, the best way to deliver active multi-asset multimanager portfolios is to combine MoM asset class building blocks – ETFs or index funds with derivatives – with third-party funds for those asset classes that are best delivered by the fund route, like hedge fund and absolute return strategies.

However, to perform the MoM role properly, the successful MoM provider needs, as well as the research capability to identify good managers, a very strong operational and risk management environment. The MoM platform should receive a daily feed from the custodian so that the portfolio can be accessed just as if it was being managed in-house. On the risk management side, the ex-post risk indicators like tracking error, market, sector and currency exposures as well as the respect of investment guidelines and regulatory ratios should be monitored, as well as performance attribution, to show which factors are contributing to investment performance. There is a requirement for legal support given the opportunity for MoM programmes to tailor investment restrictions and benchmarks, but also for the contract set-up and negotiations, dealing with fund managers in different environments. This approach requires scale and commitment.

Where investment is through a third-party fund route, it is essential to ensure that due diligence is carried out at every step of the way, that information that is asked for is collected and that the FMG and their culture is thoroughly researched and this also requires a large well-resourced team.

All this has to be done without distracting from the focus on performance. At the end of the day, the ultimate aim of the multimanager is to achieve consistent investment performance, but they must have the right product structure and support in place to manage the different risks of investing using third-party managers.