Smart beta indices are in vogue, but how much money is actually invested in them? George Mitton reports.

“Smart beta” is the buzzword of the month. Fund managers and index providers are rushing to offer new products that aim to make investors’ passive exposure more intelligent, and investors are responding. Nearly a third of institutional investors have a smart beta allocation, according to a survey by Russell Investments, and half of those plan to increase their allocation this year.

But as with all innovations, there is a difference between wholehearted adoption and what you might call “testing the water”. So how significant really is the move to smart beta and is it sustainable?

The evidence from index providers is that smart beta indices, although growing fast, still account for a small part of the overall universe. MSCI, for instance, estimates that about $9 trillion (€6.7 trillion) is benchmarked against its conventional market-capitalisation weighted indices, compared with about $95 billion against its smart beta indices, as at the end of March.

This means smart beta accounts for about 1% of the overall benchmarked sum.

The smart beta sum is growing. Money benchmarked against MSCI’s smart beta indices – the company calls them its “factor” indices – rose by half in the nine months ending in March, but, says Kassam, this was from a low base.

Will the figure continue to rise? Certainly. Kassam guesses the amount benchmarked against smart beta indices will double in the next 12 months to about $200 billion.

But, other things being equal, this will still only account for 2% of overall money benchmarked to MSCI indices – not a seismic shift, and hardly evidence that smart beta is set to upset the dominance of the traditional cap-weighted indices.

“The gap could close but honestly we don’t see smart beta replacing market cap ever, certainly not in the next few years,” says Kassam.

Why is Kassam sceptical about smart beta as a challenger to market-capitalisation? After all, there are many benefits to smart beta indices.

Instead of merely replicating the market, as a market-cap index does, these indices capture specific equity factors, such as low volatility or high income.

There is various evidence to suggest that investors can increase their returns through the intelligent use of index factors.

SMALL WEIGHTING
In addition, smart beta indices may give a small weighting to some of the largest stocks in the broad index and a bigger weighting to the smaller ones, which further reduces their capacity. The upshot is it may be difficult to invest a very large sum against a smart beta index.

“You could invest $100 billion into MSCI World quite easily,” says Kassam.

“It will take a lot more time and effort to get $100 billion into our minimum volatility index, and you would end up owning sizeable amounts of certain stocks, which a lot of investors don’t want.”

MSCI has attempted to tackle the capacity problem in response to requests from the Norwegian Ministry of Finance and the Government Pension Investment Fund of Japan, both of which wanted smart beta indices that could accommodate large inflows.

The result was the firm’s high capacity factor indices. These are an improvement, when seen from the perspective of very large investors.

However, on an industry-wide level, Kassam insists that smart beta will always be the junior cousin of market-cap.

“The great thing about market cap is that if everyone puts money into them they will still remain the benchmark. Factor indices have a sort of soft limit.”

LOW COST
However, no one is denying that smart beta indices will gain in popularity – and there is plenty of room for them to expand before this “soft limit” is reached.

One reason investors really like them is that they offer cheap exposure to investment strategies that previously cost the kinds of fees associated with active management.

Take US equities as an example. In the past, it was possible for a US equity manager to earn good fees by employing a fairly formulaic approach to picking stocks from the S&P 500 index. The fund manager would make a selection according to which stocks paid the best dividend, and the fund would be marketed as a “US income fund” or similar. 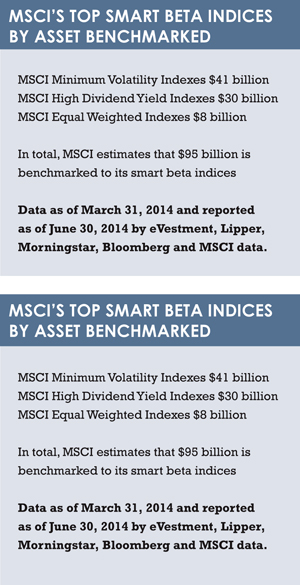 Now, investors are realising they can get similar results by investing in a passive fund that tracks a smart beta index. There are many indices that capture high dividend stocks, one example being the S&P 500 Dividend Aristocrats, which includes only companies that have increased their dividend payouts for 25 consecutive years.

“The difference we’ve seen in the last two to three years is that index providers have come out with indices that give efficient exposure,” he adds.

The total assets in exchange-traded funds (ETFs) and tracker funds that follow S&P’s smart beta indices was $52 billion, or roughly 3% of a total of $1.9 trillion, as of the end of 2013.

Again, it is not evidence of a seismic shift to smart beta, but it does show that this section of the market has gained inflows and continues to grow.

Srivastava believes passive products that track smart beta indices will gain more assets as investors realise they can obtain similar results, at lower costs, than they have obtained with active funds.

Does this imply that in future, smart beta assets will account for more than 3% of the assets that track the S&P 500? Srivastava goes on to say that it probably will, but notes that predictions remain difficult to make because the total sum invested in ETFs and tracker funds is increasing, part of a general move towards passive investment.

LOOKING AHEAD
Russell Investments, another large index provider, also offers a range of smart beta indices. The firm declined to give specific data on the amount of money benchmarked against its indices for legal reasons relating to its acquisition by the London Stock Exchange. However, Rolf Agather, global managing director of index research and innovation, did say the firm has had interest in a range of smart beta indices that aim to capture factors from value to volatility.

Agather also highlighted another finding from the firm’s aforementioned survey of smart beta investment, in which it polled 181 institutional investors in the US and Europe with at least $200 million under management: Of those respondents who were evaluating or planning to evaluate smart beta strategies in the following 18 months, three-quarters expected to make an allocation.

“We expect this trend to continue,” says Agathe.