he rich and super-rich are growing in number, but their combined wealth has declined because of volatile markets. George Mitton reports.

Do you want to join a club? Don’t worry, it doesn’t matter where you’re from, or what you do. There is only one entry requirement: you must have $1 million (€811,000) worth of investable wealth.

If you join, you’ll have plenty of company, for this is a popular club. Membership increased by about 90,000 between 2010 and 2011. The Chinese branch alone saw its membership rise by 27,000 in this period. Unfortunately, some old friends had to leave, and membership in the United States fell.

Still, this is not a small club: there are 11 million on its list. 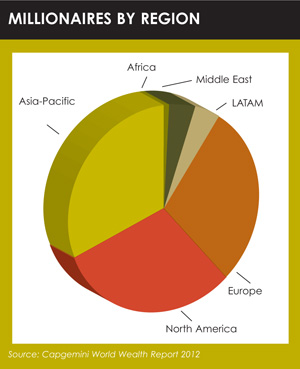 Membership has changed a lot over the years, though. The club’s stronghold used to be in the US and Canada, but in 2011, for the first time, there were more members in the Asia-Pacific region than North America (that’s not due only to the rise of China; Japanese membership swelled, due, in part, to the strong yen).

Unease
The way things are going, there will be many new members in future, and they will speak a variety of languages. Though Africa only accounts for a fraction of the club’s population, membership on the continent grew 4% between 2010 and 2011, while Latin American membership grew 5%.

And yet, within the club’s comfortable confines, there has been a considerable amount of unease in the past year. Although member numbers have increased, their total wealth has gone down – by 1.7% in 2011.

The loss was due mainly to poor performance of stock markets across the world, which encouraged wealthy people to move their money into safe, low-yielding investments. Members collectively had $42 trillion in 2011, not much more than they had in 2007.

“It is the first time in 16 years of publishing the report that the population of high-net-worth individuals has increased while total wealth decreased,” says Paul Patterson, head of global trust at RBC Wealth Management, which co-published the World Wealth Report 2012 by research firm Capgemini. 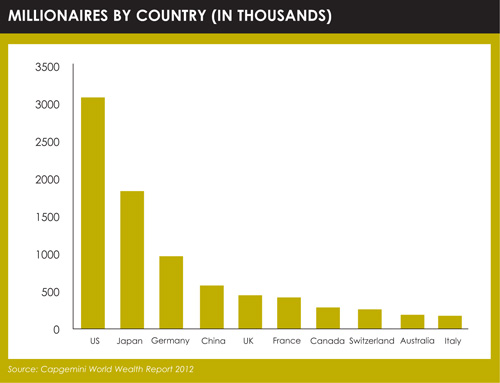 Hard for managers
This environment is not good for the wealth managers who look after members’ money. In 2007, the average profit margin for a wealth manager was 36%, says Capgemini. But since then, low interest rates, reduced transaction volumes and declining appetite for fee-generating investments have reduced the average margin to just 20% in 2010.

Costs for wealth managers have not changed. If anything, they have increased, says Patterson, who admits the average profit margin could fall further.