The United States is undergoing a savage drought. On July 22, the US Department of Agriculture (USDA) indicated that 55% of the country’s pasture and rangeland was in a poor to very poor condition, breaking the record set the week before.

On July 25, the USDA secretary, Tom Vilsack, raised the number of counties designated as drought disaster areas in the 2012 crop year to 1,369, in 31 states.

Corn and soybeans are the worst affected crops. On August 14, the USDA declared that 87% of the US corn crop and 85% of soybeans were in drought.

The anticipation of a shortage has sent corn prices spiralling. Although the US is not as central to world corn production as it was in the early 1990s, when it briefly accounted for more than 80% of exports, the country is still a corn powerhouse and accounts for a little under half of world exports, according to Linn Group, a brokerage firm.

Winners and losers
Corn prices at the end of July were 23% higher than at the start of the year, while soybean prices had leapt 40%. Analysts are wondering if they will see a repeat of 1988, when drought caused corn prices to double during the year.

Such an upheaval has knock-on effects for agriculture in America and across the world. How are managers of agriculture funds responding?

Though it may seem counter-intuitive, the drought does not mean farm profits will fall, says James Govan, manager of the Baring Global Agriculture Fund.

Last year was a record year for farm profits despite low yields due to hot weather, because rising corn and soybean prices and US farm insurance programmes protected farmers. Govan expects the same this year.

“On an aggregate level, net farm income should be strong, because the price will offset the low volumes,” he says. “There will be winners and losers, but even the guys struggling with their crop will get an insurance payout. If you’re a farmer who’s lucky enough to have a good harvest, and some parts of America have, such as Minnesota, you’ll be looking at very strong profits.” 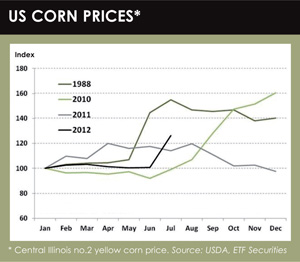 Demand for farm machinery is correlated with farm profits, so if profits are high, investments in this sector could do well. Meanwhile, high corn and soybean prices should encourage farmers to maximise output, and to do this they will apply optimum levels of fertiliser.

Fertiliser inventories are low because distributors have run down their stocks, says Govan, which should provide added demand for fertiliser companies.

The real cost of the drought will be borne by those who consume and distribute corn and soybeans. Makers of edible oil and grain distributors could expect a dent to their profits in the short term, as could chicken, pork and beef producers, which buy corn to feed their animals.

Many of these companies will pass on the costs to consumers, and an expected rise in the price of meat and dairy products could add a percentage point or more to overall US food inflation, bringing the average price of groceries up by between 3% and 4%, according to estimates by the USDA.

Some analysts believe the effect on food prices will be more significant, though. As a result of the US drought, the Food Price Index of the United Nations Food and Agriculture Organization rose 6% in July, to a level that has been correlated in the past with rioting and civil unrest in less developed countries.

Promising avenue
The severity of the drought has revived a debate about the use of corn to make ethanol, a biofuel. The US sets aside 40% of its corn crop to make ethanol and the practice has been criticised in the past for aggravating food shortages.

If a drought were to strike again next year, Govan says he would continue to take long positions in machinery and fertiliser companies, as well as in crop and seed protection companies, such as Monstanto and Syngenta. Another promising avenue could be companies that make palm oil, which can be used as a substitute for corn and soybean oils.

If, on the other hand, the US expects a bumper crop, then processing, distribution and meat companies will look a lot more attractive.