The appetite for junk is far from satisfied. This is true for dark chocolate with roasted hazelnuts as much as it is for European high yield bonds.

2013, is expected to be a record for European high yield bond issuance. Year-to-date issues amount to €65 billion, which is almost twice the amount of 2012.

Low interest rates, portfolio de-risking by institutional investors and banks turning cautious on lending ahead of Basel III are behind the seemingly insatiable appetite for this asset class.

Data from S&P Capital IQ LCD shows that 2013 saw by far the largest amount of issuance of European high yield bonds since its records began in 2006. 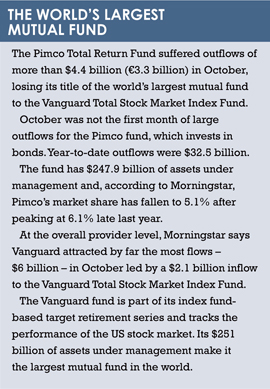 Fraser Lundie, co-head of credit at Hermes Fund Managers, says current supply and demand factors mean a lot of investors are “forced to buy whatever comes to the primary market” because it is the only source of liquidity.

“That is significantly changing the overall quality of portfolios,” Lundie says, adding that fund managers are under pressure to put cash to work.

Lundie says the market is so hot, sponsors and banks are able to execute deals that would not have been possible a year ago. He adds: “Issuers are rightfully exploiting investors’ strong appetite for yield, the market’s scarce liquidity and record-low interest rates to issue debt on terms that better suit them.”

Kommer van Trigt, head of rates and fixed income at Robeco, says deteriorating quality of credit is not just an issue in Europe but also in the US. “There is a general movement that is no longer all about bondholder value anymore. Shareholder value is gaining traction,” he says.

Maturities are getting shorter, call dates closer and investor protections weaker as the legally binding agreements in bonds, known as covenants, are being relaxed in companies’ favour.

Some of the shareholder-friendly activity that has gained traction in the US is now becoming evident in Europe, too. This includes share buy-backs, mergers and acquisitions, and special dividend payments – corporate actions that reward shareholders but do not necessarily favour bondholders.

The most extreme recent example in terms of a longer-dated maturity bond is that of Unitymedia, a German cable company owned by Liberty Global that issued a 15-year, non-callable credit in November and raised €475 million. Its yield stands at 6.25%.

Although Robeco’s exposure to high yield is now lower than three years ago when spreads were higher, van Trigt says he does not expect a surge in default rates.

He also points to deals that were heavily oversubscribed because investors were impatient and ready to settle for lower quality.

There have been more B-rated issuances in 2013 than in the previous year, but Sucheet Gupte, director at S&P Capital IQ LCD, says Europe still has a “healthy” BB–rated market in terms of volume. Some 42% of issuances in Europe were B-rated compared to 34% in the previous year. He says this is still in line with historical averages. Over the same time, the share of BB-rated issuance has fallen to 29%, from 45%.

Telecom Italia will become part of his benchmark in December, with bonds maturing as far away as 2055. “No matter what you think about Telecom Italia, you need to have a pretty strong view on interest rates to invest in its longer maturities,” Aspbury says.

The European high yield bond universe has already markedly changed over the past year as a number of companies have lost their investment grade rating, dropping out of the high yield category altogether. There have been 16 fallen angels in Europe. Another five, rising stars, received upgrades.

Europe had virtually no energy high yield sector, which is a large part of the US market, until last year when German multi-national conglomerate ThyssenKrupp and Luxembourg’s multinational steel manufacturer ArcelorMittal – two fallen angels – fell into the investment grade sector.

The credit team at JP Morgan Asset Management has been active in the automotive sector, › with a preference for automotive parts over auto manufacturers. It has also focused on specific credits in the sterling high yield sector, which Aspbury says tends to be dominated by health care and consumer companies.

“We focus more on individual credit stories than countries per se,” he says, and adds that, for example, there has not been a thematic shift to or from the peripherals.

But Robeco has turned cautious on debt issued by companies issued in the countries more heavily hit by the financial crisis: Greece, Portugal, Italy, Spain and, to some degree, France.

Robeco does invest in government bonds issued by these countries, though. Van Trigt says that these form an asset class that is both under-owned and attractively valued. 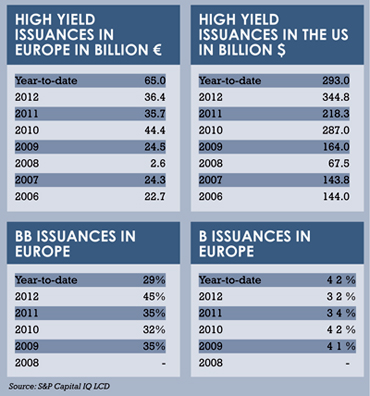 Aspbury says deals have become more expensive and there are few bonds that trade above 8% now, with even fewer trading much below cash prices. “We have looked to the primary market to provide the best alternatives, to pick up incremental yield and portfolio performance.”

“It has been difficult, however, because everybody else has been looking to do the same so the pricing in the primary market has gotten a lot more expensive while terms have gotten looser.”

Lundie says fund managers that continue to only buy on the primary market now are essentially reducing the credit quality of their overall portfolio.

Fund managers sometimes deliberately choose to reduce the credit quality of their portfolio, perhaps because they feel risk is under priced, but Lundie says this should be a separate decision from what happens in the primary market.

PROFIT TAKING
Over the past six months, Hermes Fund Managers has taken profits in European high yield and turned to the US market.

Lundie says the European market is now fully valued and there is not much more of a liquidity premium for owning Europe. “We have been only buying selectively in the primary market; if anything, the portfolio was more defensive six months ago than what it is today.” However, he says, the portfolio is still defensive.

Patrick Zeenni, deputy head of high yield and arbitrage credit at Dexia Asset Management says companies are in a “deleveraging mode” and “selectivity is key”. He adds: “In Europe, with lower growth and rates set to be low for longer, corporates have, on average, less aggressive leveraging policies.

“In the US, the market is more diversified and has more depth but rates are on the upside and companies might choose shareholder friendly strategies detrimental to credit.”

Zeenni adds that there have been many emerging deals, mostly Eastern European issuers tapping the market, adding that his team is evaluating if the premium offered versus the sovereign country’s debt compensates for the risk.

Despite record issuances this year, the US high yield market dwarfs that of Europe. Year-to-date issuances in the US amount to $293 billion (€255 billion), compared to $345 billion in 2012.

This year, though, has seen a shift away from bank lending towards high yield debt.