Lending out securities could help hedge funds balance losses or lift returns after they have struggled to beat the broader market. Stefanie Eschenbacher explores the changing role of hedge funds in the securities lending market.

Hedge funds have long been key drivers of the securities lending market on the borrowing side, but years of disappointing returns have prompted them to reconsider their role on the lending side.

Stuart Jarvis, a sales trader, securities lending, at Citi, says hedge funds are taking on new roles on the lending side, which could help them balance losses or lift returns.

Data from Hedge Fund Research and S&P Dow Jones Indices shows that the HFRI Fund Weighted Composite Index returned 2.78% over the year ending October, less than a third of the gains the S&P 500 made over the same period.

Hedge funds have also been under pressure from investors to lower performance fees, even more so since the biggest US pension fund divested from its $4 billion (€3.2 billion) hedge fund programme to reduce costs and complexity.

The California Public Employees’ Retirement System, which manages $300 billion of assets, announced in September that it would exit 24 hedge funds and six fund-of-funds over the next year.

“A lot of the larger hedge funds are now looking to be efficient on how they control their long inventory, which means they are participating in some cases in the securities lending market itself,” says Jarvis. “Previously, hedge funds did not generally lend out their assets.”

Despite greater participation on the lending side, they remain relatively small players. Jarvis says their participation, compared to those of pension funds, endowments and insurance companies, is still low.

“What is interesting is that they are keen on a role that traditionally they have not done,” he says. “Some of that comes about by the fact that hedge funds themselves have grown in size and complexity.”

Jarvis says many large hedge funds have treasury departments that are looking to optimise returns on inventory, and securities lending is one way they can do that – whether it is directly in the securities lending market or synthetically.

Karl Loomes, a market analyst at Astec Analytics, SunGard’s capital market business, says such a shift of interest has not been significant enough to be captured by SunGard’s data. However, Loomes confirms anecdotal evidence that hedge funds are taking more of an interest in the securities lending side.

“We have seen some slow growth in their interest in securities lending as opposed to just the act of borrowing to short sell, but this still comes very much from the buy-side perspective,” Loomes says.

He adds that a greater participation on the lending side would make sense as even a return of 50 basis points per year from lending out securities could help hedge funds diversify their revenue streams.

Hedge funds would be earning money from securities they are holding; securities that would not be making money otherwise. Loomes says that there has been a broad and increased focus on safer returns.

“Hedge funds have always kept their cards close to their chests, and they are still,” Loomes says. “They give little information about their strategies and what they are trading.”

Loomes adds that beneficial owners in general have increased their belief that securities lending programmes are important to them.

Josh Galper, managing principal at Finadium, says hedge funds have been lending securities for years. “It does happen regularly,” he says, adding that until now it has been an opportunistic activity driven by revenue.

In a 2013 survey of 41 hedge funds, Finadium found that 47% were lending out equities or repo-ing out securities for income or self-financing.

How the role of hedge funds will evolve over the next couple of years will largely be determined by regulation, both on the lending and borrowing side.

Basel III will place stricter rules on regulation, supervision and risk management of banks, so demand for high-quality, liquid collateral is already on the rise. Under Basel III, banks should have liquid assets to satisfy at least 30 days’ worth of liabilities at all times.

REGULATORY BURDEN
European Market Infrastructure Regulation will tackle derivatives, central counterparties and trade repositories, and will require over-the-counter derivatives to be centrally cleared, and clearing houses will demand collateral to hold in exchange.

Together with the US Dodd-Frank Act, these regulations could create a situation where there is a collateral shortage.

Jeannine Lehman, who heads global collateral services in Europe, the Middle East and Africa for BNY Mellon, says all market participants will have to start taking into account who is borrowing and who is lending their indemnification, and what collateral is being offered.

Lehman says regulation will make a difference when it comes to how securities on loans are priced, adding that this will be less about asset class-by-asset class pricing and more about trade-by-trade pricing. 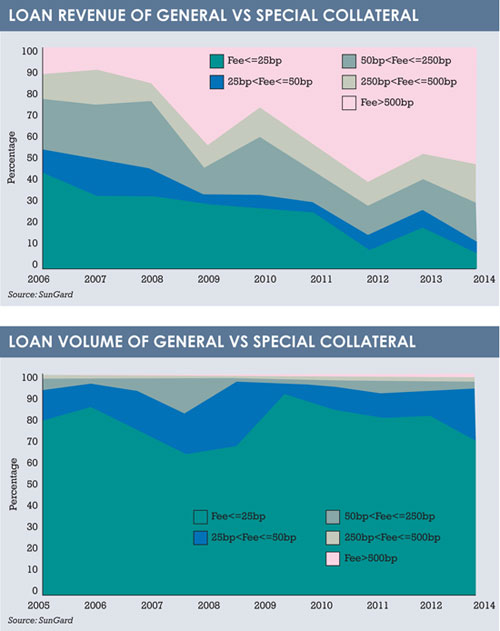 Ten years ago, securities lending was thought of as an add-on service for custodians and an additional source of alpha, but Lehman says today it is thought of as a transformation mechanism, allowing, hedge funds to swap illiquid securities for liquid ones, which they can use as collateral in derivatives trades.

“Regulation will absolutely mould what happens in the lending world,” she adds. “As regulators get more of a handle on how lending is used as a liquidity mechanism, they will continue to want to shape how lending works and how it is used as a tool for transformation.”

HUNT FOR ASSETS
Lehman says regulation will also drive demand for high-quality, liquid assets, and prices for those will eventually increase. “It is interesting,” she adds. “Borrowers go hunting for better quality assets than those they already have in their own portfolios.”

Jeffrey O’Neill, who heads global trading at eSecLending, says although non-cash collateral has historically been more dominant in Europe, the ever-changing regulatory landscape is now forcing borrowers to focus on balance sheet usage and capital ratios, in an effort to comply with the new regulations.

“The borrowers’ desire to pledge equities, corporate bonds and other assets they already possess, as part of long-term strategies, has increased as the borrowers look to finance their book much more efficiently,” he says.

Hedge funds still seek all types of securities for a variety of reasons, be they to borrow to place a directional bet or to execute a hedge against a particular issue or basket of securities.

In general, O’Neill says, hedge fund demand is greater for small-cap and mid-cap equity securities than it is for large-cap assets.

“Small- and mid-cap securities have experienced long-standing demand, but the level of demand has increased in recent years in conjunction with the growing hedge fund industry,” he says.

Small- and mid-cap securities have become more expensive to borrow, owing to increased competition for these securities, which O’Neill says is particularly the case when demand is greater than supply, increasing the price to borrow.

One asset class that has recently seen above average-growth is exchange-traded funds (ETFs).

“ETFs have experienced tremendous growth in both their funding and in popularity in the securities lending market,” says O’Neill. “ETFs allow funds or borrowers to hedge or place directional bets on the desired sector or region quickly, but also remain easy to unwind quickly.”

O’Neill adds that European ETFs have shown a slower growth trajectory than those in the US, but demand has grown nonetheless and is expected to continue.