We asked the question: What value do you believe independent directors bring to the industry? Respondents were allowed to tick as many answers from the six provided as they liked (fig 1).

About half of respondents ranked the duty to keep a check on fund managers and executives as the third-best example of how independent directors offer value. More specifically, the idea that directors represent client interests came almost lowest – albeit at 37%, the score was not extremely poor. 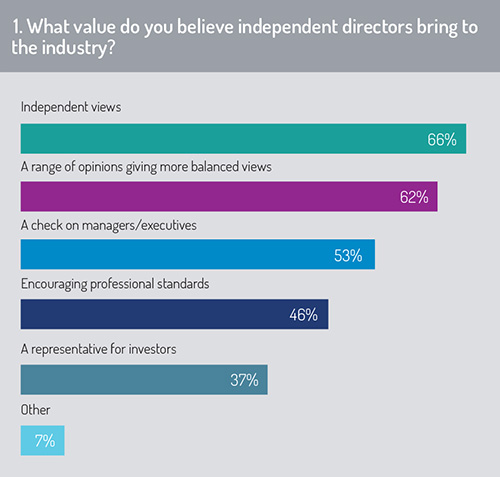 If this reveals some scepticism about the role of independent directors acting as customer representatives, then further scepticism is seen when we look at some specific comments given by respondents.

“Honestly, I believe it’s a way to represent the power of certain lobbies,” said one respondent. Another merely said independent directors offer “no value” and another commented: “In France, nothing!” And note that 19% of our respondents work in France!

We can speculate about which lobbies our respondent is talking about. Perhaps the ESG lobby using the new regime of fund governance as an additional channel to exert greater levels of shareholder activism. On the other hand, might lobbyists be the oil majors and tobacco industry, equally attempting to influence voting or investment flows? Or perhaps it refers to the larger, more powerful institutional investors in a fund who could push for favourable treatment when a fund is gated. Far-fetched you may say, but it’s food for thought.

Respondents to our survey believe independent directors’ main value comes from the airing of independent views and a wider range of opinions at fund board meetings, and their encouragement of a more balanced discussion.

But let’s consider this point: It is now widely accepted that to get a greater range of opinions at board level – whether in a corporation or a fund – there needs to be more ‘diversity’. Diversity – surely another prominent word in our word cloud – refers to people from wider backgrounds than the traditionally male, middle-aged demographic that historically characterises management in financial services.

We’ll come back to the diversity topic in governance shortly, but now consider this. We asked our respondents about the qualifications that a typical independent director would need (fig 2). (To emphasise, this is not a question of gender or other diversity issues, but of career backgrounds.) 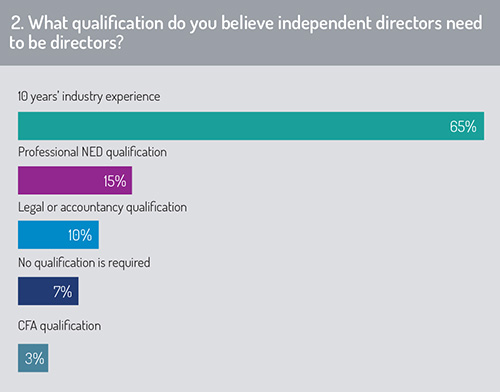 Most (65%) said independent directors should have at least ten years’ experience. After this, 15% opted for them having a professional non-executive director qualification and only 10% said legal or accountancy qualifications were desired backgrounds.

Mark White is the other independent director. White was appointed as an independent non-executive to Aviva Investors in 2015 and to the funds in October 2019 – again, a timely appointment given the new FCA regime.

As for their backgrounds, Coates is a chartered accountant and Oxford-educated White has spent his career at several asset management firms.

The expectation is that independent directors will become successful protagonists in pressuring firms to lower their fund fees where necessary. Doing this could lead to steely glares and frosty conversations around the boardroom table. Therfore, can we imagine what the atmosphere in the boardroom might be like as the independents square up to corporate directors over matters of fund value? 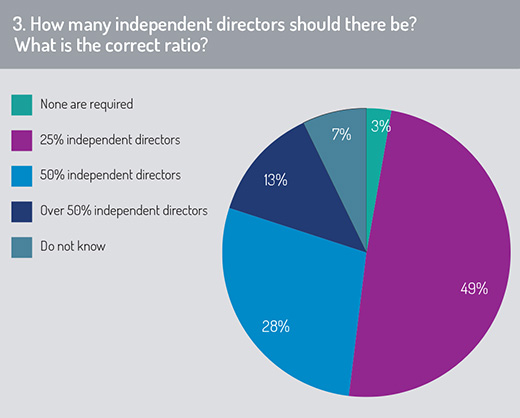 The Funds Europe/CACEIS survey asked respondents what they felt was the correct ratio of independent directors to corporate members on fund boards (fig 3). Most (49%) felt boards needed 25% of independents, which is the standard guideline. But 41% of respondents in total voted for boards having either 50% or more.

“You need a few independent directors to have the comfort of not being alone. If you are on your own, then there is the chance that many topics will have already been discussed [internally] by the time of the meeting,” one independent director told Funds Europe. 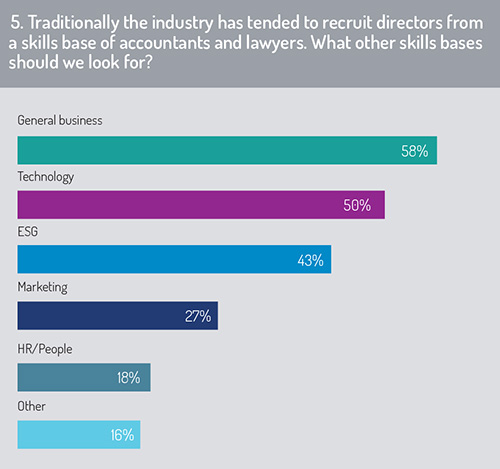 ‘General business’ ranked top in our survey. We might interpret this in a number of ways. Sales roles may feature strongly in our respondents’ minds. But although 58% rated ‘general business’ as the number-one area from which to recruit directors, 50% said that technology backgrounds were important – a reflection, perhaps, of the sometimes glacial speed at which asset management firms are bringing themselves into the digital age and a reflection also of the generational shift toward millennial clients.

People working in ESG – everyone’s favourite topic and written very large in our word cloud – could provide a good source of directors for asset management firms, too. This was ranked third-highest in the survey behind ‘general business’ and ‘technology’.

Again, the comments section suggested this list could be much longer. Compliance & risk, along with fund administration backgrounds, could have ranked highly as desirable, had our survey offered those categories.