Asset management firms could face reputational damage and accusations of hypocrisy if the expectations they express for corporate behaviour through votes cast at AGMs are not matched by their own practices. This is important as ESG proliferates and there is now firm evidence that traditional active managers are increasingly using shareholder activism to try to increase returns and protect investments.

Public demands made to companies in the UK by asset management firms that are not historically associated with taking tough shareholder positions as much as some hedge funds increased to 55 last year, from 35 in 2018 and from 13 five years ago, according to research by Headland, a communications consultancy.

Traditional fund managers cited in the research included Columbia Threadneedle and Schroders, which last year supported Coast Capital, a US hedge fund, in demanding the removal of the chairman of transport company First Group.

Over the past five years, traditional asset managers were successful in getting 37% of their demands implemented by the companies targeted.

Activism by traditional asset managers so far appears restricted to pragmatic matters of business. But if shareholder stances do take more of a social and environmental tone, asset management firms will not want to be seen as preaching one thing but doing another.

For example, from the start of 2019, the Investment Association began to issue warnings to investors of companies not on track to meet targets set by the Hampton-Alexander review for 33% of board members to be women by 2020. The independent Hampton-Alexander review was launched by the UK government with the aim of increasing female representation in senior positions in FTSE 350 firms.

In 2018, the trade body highlighted 11 FTSE 250 companies with all-male boards, ten of which have since appointed at least one woman.

But the asset management industry has gender problems of its own – a situation that does not seem to be getting better.

Research by PwC and the Diversity Project showed that the difference between what women and men earn in the investment management sector had worsened.

A disproportionate number of men are working in the highest-paid roles in the asset management industry and the industry has the lowest percentage of highly paid women, according to the research, published in October last year.

Just 23% of women occupied the upper quartile of the industry. This was even slightly poorer than in other related sectors: the score was 25% for banking, and 32% for insurance. Out of 22 business sectors analysed, the investment management sector came second-last in terms of gender pay performance after recording an increase of 0.6% in the average mean pay gap over a two-year period. And out of the five sectors with the biggest gender pay gaps recorded in 2018 (banking, investment management, insurance, real estate and travel), only the investment management industry failed to record an overall improvement.

Dame Helena Morrissey, who chairs the Diversity Project and has worked within investment management, said: “We still have a problem convincing many mainstream fund managers that diversity is a business issue, rather than political correctness.” 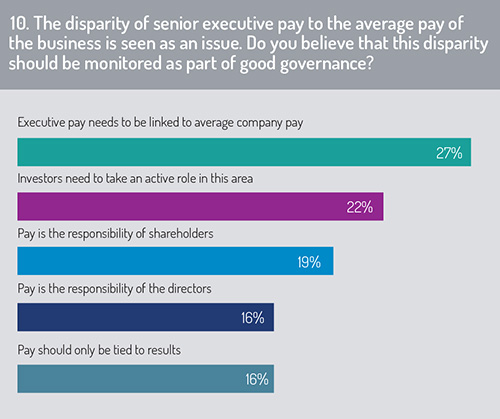 Diversity is clearly an issue where asset management needs to be careful of being ‘preachy’. Another issue where this could flare up is executive pay.

The corporate pay argument for asset managers – acting as shareholders – is traditionally a business matter centring on the shareholder value a CEO brings to a company. But with executive pay being examined in relation to how much companies pay their employees, pay is increasingly mixed in with the social cause of inequality.

Amundi, Europe’s largest asset manager, is getting serious about ESG investing. The firm told Funds Europe in December 2019 that it planned to name and shame ESG laggards from the universe of companies it invests in.

Part of its ESG exercise is to ask each company in which it holds shares to release the ratio of the CEO’s pay to that of its average employee. What is this exercise, if not an exercise in social commentary?

At least Amundi’s CEO Yves Perrier may avoid flack over his own pay; he’s apparently one of the lowest-paid asset management CEOs, relatively speaking. In 2018, he earned €3m, including basic pay and bonus. In 2017, when he earned €2.58m, a McLagan survey showed his pay was at the low end of the market, compared with a 24-strong peer-group median of €8.16m.

Our respondents clearly felt strongly about pay (fig 10). Many (27%) feel senior executive pay should be linked to average company pay and 22% said investors do need to play an active role in this area.