This year’s survey shows that scale is as important as ever to global custodians – but headcount and operational costs will also prove key, writes Nicholas Pratt.

JP Morgan has jumped over State Street and BNY Mellon to become the world’s largest custodian and administrator, with about $29.25 trillion of assets (see table 2, page 49, which gives euro figures). State Street consolidates a lead on BNY Mellon gained in the past year, with $28.7 trillion.

Notably, JP Morgan has decreased its headcount at the same time as increasing its assets (see below).

Other custodians have seen increases in headcount.

State Street’s staffing level has increased. In the past two years the level is up by 45% – or from 16,000 to 23,237 – making State Street comfortably the most staffed of all the global custodians. However, this is a more complicated accolade, especially when one considers the market’s reception to recent quarterly results from the majority of global custodians.

For example, State Street not only grew its custody assets, it also brought in record asset-servicing fees of $1.323 billion. Yet of most concern to analysts was the fact that expenses went above $2 billion for the first time.

Similarly, BNY Mellon posted a 50% increase in profit from the same period in 2014 (for the group rather than its custody unit) and despite reducing its expenses to the lowest in three years (helped by the sale of its flagship headquarters on 1 Wall Street), activist hedge fund Marcato has referred to the bank’s “bloated employee base”. 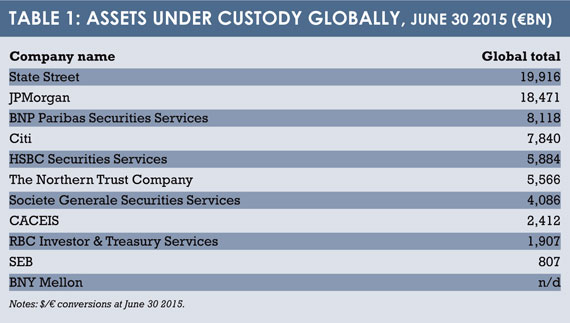 The bank employs more than 50,000 overall but the asset servicing arm now employs 18,559 (an increase of 14.43% on the 2013 figure). This figure is likely to grow further once the major outsourcing deals with T. Rowe Price and Deutsche Asset and Wealth Management begin.

Other US banks have seen their headcount reduce, slightly in the case of JP Morgan (down by 1.16% to 13,517) and markedly in the case of Citi (down by 66% to 4,400) which has exited a number of markets and sold its hedge fund and private equity administration business to SS&C for $425 billion.

Headcounts have stayed steady among the remaining custodians, the one exception being BNP Paribas Securities Services, which has seen its employee numbers rise by 41% to 6,000 since 2013 (as opposed to a 21% increase in assets under custody since 2014) – a somewhat surprising increase, given that since 2013 the bank has merged its asset servicing arm with its investment banking unit in order to save on operational costs like headcount.

Assessing headcount in the custody market is important because the function is so commoditised. All the providers have strived to make the process as efficient as possible by developing automated, single global platforms designed to reduce headcount.

But while a lean employee base may satisfy shareholders and market analysts, it may not be so welcome by asset managers. As our article on p48 points out, managers have adopted a more common sense approach to pricing, but if they are to take up asset servicers’ offer of a long-term partnership based on value-added services, they may not want to see too drastic a reduction in staff numbers.