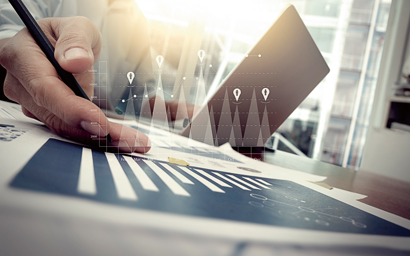 At the midpoint of an unpredictable decade, Funds Europe uses Towers Watson’s figures to look at how today’s global asset management industry compares with that of 2010.

In a volatile decade marked by uncertainty, it’s instructive to compare and contrast the top 50 asset managers globally at the start of 2015 to those in 2010.

The figures in this analysis are taken from Towers Watson’s The world’s 500 largest asset managers report, and are correct as of year-end 2014.

TOP 10 LARGEST FIRMS
The top 10 remains largely unchanged in terms of names, with BlackRock continuing to reign supreme. BNP Paribas no longer features (having fallen to 14), and BNY Mellon has joined (rising from 11).

Of those that remain from 2010, eight improved their assets under management, with only Deutsche Bank suffering a net reduction (of $300 billion – the firm fell from sixth to tenth as a consequence). Vanguard experienced the biggest increase in AUM, in both numerical and percentage terms ($1.4 billion, or 78%).

The lower rankings can be attributed to strong relative performances by others, including new entrants Wellington, Northern Trust and Legal & General (which leaped from 29 to 15, and saw its AUM rise by 91% during the period in question).

THE TOP 21-30 FIRMS
Only three names remain from 2010 – Ameriprise, Invesco and Met Life – though these firms still saw increases in their AUM.

Wells Fargo and Generali slipped down in the rankings, but Zenkyoren fell off the listings entirely after losing $12 billion to the 2011 Tohoku earthquake.

THE TOP 31-40 FIRMS
Of 2010’s entrants, Mass Mutual, Mitsubishi and Sun Life remain, all having seen increases in their AUM. Old Mutual and Credit Suisse dropped into the next quintile. Manulife fell from 36 to 66, with AUM dropping from $476 billion to $272 billion (down 43%).

Manulife attributes this to the falling value of energy investments, prompted by the precipitous fall in oil prices since June 2014. ING likewise suffered, falling from $33 billion to $75 billion. However, this results from the firm divesting much of its AUM to new entity NN Group as part of its post-crisis restructuring.

Elsewhere, there are notable new entrants, such as Aberdeen Asset Management and Affiliated Managers, which climbed 21 and 15 places respectively to occupy positions 40 and 35. Total AUM rose by $1.4 trillion (23%) to $6 trillion.

Dimensional Fund Advisors, Macquarie Group, New York Life and Schroders – named in the report as the fastest-growing firms in 2014 – have all joined the top 50. Dimensional and New York Life saw their assets increase by 84% and 91% respectively.

Dai-ichi has disappeared entirely. In 2014, the firm combined with Mizuho Financial under the Mizuho imprint, but the entity’s AUM are not sizeable enough to plant the firm in the top 50. DZ Bank, which has suffered in the intervening years due to Europe’s ongoing economic struggles, has fallen out of the top 50 entirely.

Overall, AUM in this category improved by a modest $634 billion (approximately 17%).

CHINA: A JUMP IN ASSETS Notwithstanding the Chinese stock market’s ‘Black Monday’ in August 2015, and suggestions from some quarters that growth is finally slowing, the figures indicate China’s asset management industry has increased significantly since 2010.

While the same firms feature, new entrants have also entered the global 50; Baoying Fund, Huashang, HuaTai Pinebridge, SWS MU and Tian Hong. Between them, they account for $77 billion AUM.

INDIA: 136% GROWTH
Of 2010’s entrants, UTI Asset Management and State Bank remain. UTI’s AUM declined by $1 billion, and the State Bank of India’s increased by $2 billion – however, the AUM collectively held by India’s asset managers has increased from $41 billion to $97 billion overall, a hike of around 136%.

This is attributable to the arrival of three new entrants: Reliance Capital, Religare Enterprises and Birla Sun Life.

LATAM DECLINES
While in 2010, Latin America was tipped as a region abounding with growth prospects, since 2011 it has been hampered by economic slowdowns across the board.

This stoppage is reflected in the figures, with overall AUM declining by around 24% from $547 billion to $415 billion, and the average AUM of asset managers falling from $137 billion in 2010 to $104 billion today.

Comprising $50 billion of the Latin American AUM is BTG Pactual. Since 2010, the firm has significantly expanded its asset management services, and has purchased regional brokerages Celfin Capital (Chile) and Bolsa y Renta (Colombia).

This is perhaps attributable in part to several new arrivals in the rankings, including BCV, LGT, Vontobel and Zuricher Kantonal. Combined, they hold $332 billion AUM – 11% of the total AUM in 2014, but 70% of the increase on 2010’s total.

CANADA: NEW ENTRANTS
Since 2010, overall AUM have increased by $886 billion, from $2.3 trillion to $3.2 trillion. However, average AUM has fallen since 2010, partially driven by a rise in the number of Canadian entrants; BMO, Fiera, IGM, Industrial Alliance and Scotiabank. BMO is now fourth largest, with $326 billion AUM (around 10% of the total)

Manulife, in 2010 the largest Canadian firm, has dropped from first to fifth. Assets have almost halved, falling from $476 billion to $272 billion (down 43%) The firm attributes this to the falling value of energy investments, stemming from the plunging oil price.

AUSTRALIA: FEWER FIRMS
Since 2010, the number of Australian firms represented in the 500 has fallen from five to three, and total AUM has fallen to $583 billion from $632 billion.

Part of the reduction in entrants is attributable to the November 2010 incorporation of AMP into the AXA Investment Managers brand.

Conversely, the departure of NAB (National Australia Bank) from the rankings is not administrative. Since 2009, the bank has dented earnings by pursuing a strategy of undercutting retail banking and asset management competitors.

JAPAN: CONTRACTION
The Japanese asset management industry was typified by contraction and conglomeration in the five years since 2010. Overall, AUM fell by $1.009 trillion between 2010 and 2014, from $4.94 trillion to $3.93 trillion.

Significant losses in AUM were recorded by most entrants over the period, most notably by Diawa. The firm’s assets fell from $164 billion to $47 billion (down 71%).

Orix Corporation, which did not feature in 2010, is now the fourth-largest Japanese representative on the list. Since 2011, it has expanded significantly into asset management, with the purchase of around 90% of Robeco’s equity.

Mizuho Financial and Dai-ichi Life Insurance combined in 2014 under the Mizuho imprint to create the eighth-largest Japanese entrant, with AUM of $226 billion. 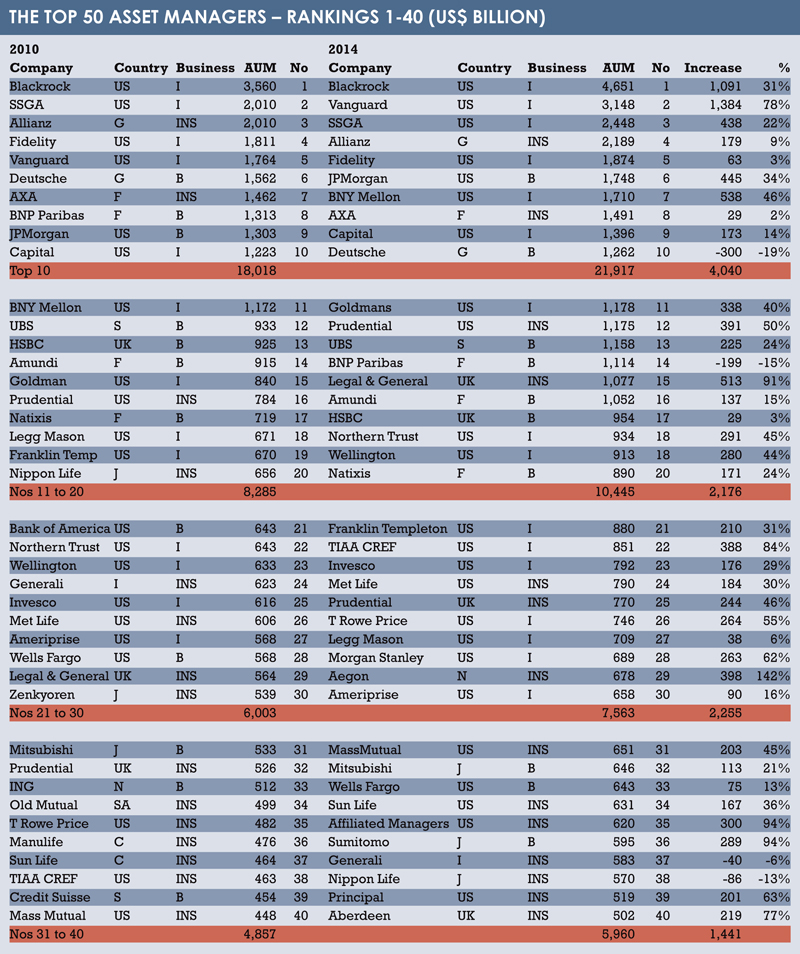 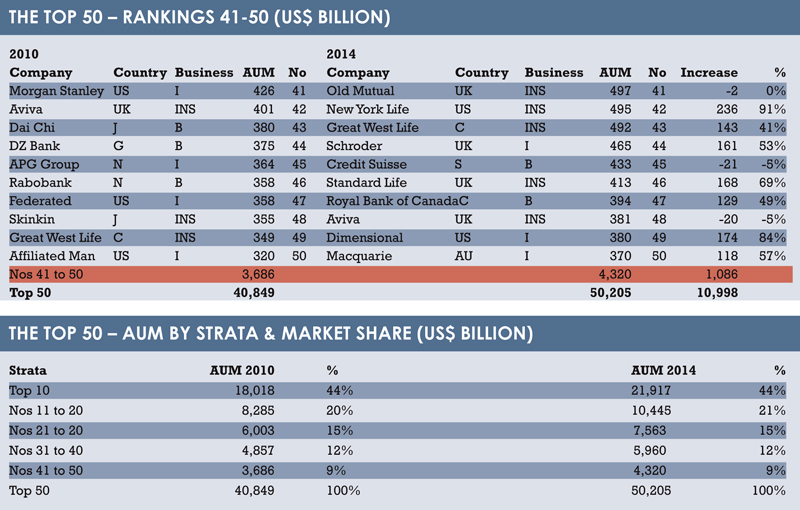