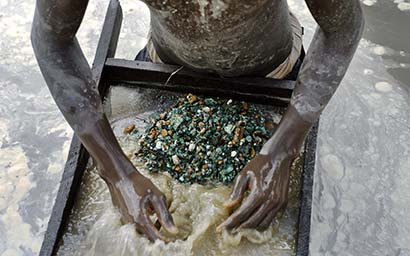 Mandatory auditing of gold refineries in the UAE has sparked a conversation about whether gold investment can be eligible for ESG strategies, writes David Whitehouse.

The decision by the United arab Emirates (UAE) in November 2021 to start mandatory audits at its gold refineries is spurring optimism that traceable physical gold can become an ethical investment. However, experts argue that more still needs to be done to tackle illicit trade.

The UAE is the biggest destination for artisanal and small-scale gold miners in east and central Africa. Gold from the UAE enters global markets via sales to India, Switzerland and the Middle East. Until now, gold at the UAE’s refineries has been accepted with no questions asked as to its origins.

This change is part of a wider shift to tighten global regulations and clamp down on smuggled gold mined under unknown conditions. The independent precious metals authority, the London Bullion Markets Association (LBMA), has tightened rules so that refiners must source from bullion centres that meet OECD [Organisation for Economic Cooperation and Development] standards to qualify for its ‘Good Delivery List’. The UAE’s move came after Switzerland in October last year urged refiners to be cautious on gold imports from Dubai to avoid the risk of reputational damage.

One firm that believes gold investing can be compatible with environmental, social and governance (ESG) aims is De Pury Pictet Turrettini in Geneva. The wealth management firm in November launched the Swiss Positive Gold Fund, which aims to give investors access to traceable and sustainable physical gold. The fund, which has a starting capital of 30 million Swiss francs (€29 million), was launched in partnership with Swiss trading services provider MKS PAMP.

The fund’s physical gold sourcing follows “the most stringent ESG rules in the industry”, says managing partner Frédéric Dawance. The larger gold producers used by the fund are members of the World Gold Council and undergo environmental and social audits, as well as being committed to reducing CO2 emissions in line with the Paris agreements. The fund also sources a “substantial” amount of gold from artisanal mines that are approved by Swiss Better Gold, which is supported by the Swiss State Secretariat for Economic Affairs (SECO), Dawance says.

The gold mining sector employs an estimated 20 million miners, often micro-entrepreneurs. SBG works to encourage the formalisation of the employment of artisanal miners and establishes direct supply chains between their mines and SBG members in Switzerland. Traceability is guaranteed by the MKS provenance label, based on technology that integrates into each gold bar a record of each step of the metal sourcing and production processes.

Critical shift in gold sourcing
The growing importance of ESG investment means that there has been a “critical shift” in the responsible sourcing of gold versus ten years ago, says Pacome Breton, director of investment risk at Nutmeg, a UK digital wealth manager. The start of audits by the UAE is “excellent news”, he says. Nutmeg, which has an ETF that offers exposure to LBMA-compliant gold, is currently cautious on new investment in the metal due to dollar strength, inflation possibly peaking and the risk of bonds suffering in a potential rate normalisation in 2022, he adds.

Gold smuggled from countries such as the Democratic Republic of Congo (DRC), South Sudan, Sudan, and Central African Republic (CAR) is often used as a money-laundering tool by armed groups and criminal networks, according to investigative and policy team The Sentry. The United Nations says that conflict gold provides the largest source of revenue to armed groups in the eastern DRC.

A further problem is artisanal and small-scale (ASM) gold, which in the DRC is often mined in dangerous conditions. The Sentry says that ASM gold from the DRC, South Sudan, and CAR is mainly smuggled or exported to neighbouring countries such as Uganda, Rwanda, Cameroon, Kenya, Chad or Burundi before being exported to Dubai. Gold from Sudan, meanwhile, is typically exported direct to the UAE.

Some ESG funds simply refuse to invest in the gold industry. Triodos Investment Management in the Netherlands, for example, concentrates on wind energy, organic farming, financial inclusion, or listed companies that contribute to energy transition themes. There is “no mission fit” for some industries such as gold, says a spokeswoman for the firm.

At De Pury Pictet Turrettini, Dawance argues that the certification can move the gold industry forward in ESG terms. Traceability promotes “responsible mining and processing with a positive social impact,” he says. “This initiative has a measurable positive impact on both the environment and the lives of these families and makes a lasting contribution to the fight against poverty.”

Much remains to be done, argues Joanne Lebert, executive director of the Canadian conflict minerals research group Impact. “The challenge with the gold sector is that there are still too many places with lax enforcement. When you boost enforcement in one place, gold tends to find another route,” she says. Turkey and India are possible alternative entry points for smuggled gold produced under unknown conditions, she adds.

The UAE’s decision is a “positive step” but there is not enough information on how it will be implemented, says Marc Ummel, programme officer for raw materials at the Swissaid NGO. Much of the gold currently entering the UAE officially comes from Uganda but in fact originates in the DRC, he says.

A strong due diligence requirement is also needed for gold souks and trading companies, as is stronger cooperation between the UAE and exporting countries, he says. UAE customs controls also need to be much tighter, as it remains very easy to import gold with a false certificate of origin, he adds.

Gold with dubious origins will still enter the global system somehow, according to Ummel, who points to India as a possible entry point and says it needs mandatory third-party audits at refineries.

Recycled gold may be favoured by retail outlets such as Pandora, but in fact there is no visibility as to where the gold came from, Ummel adds. Reporting of recycled gold needs to be much more detailed, he says. “Two weeks ago, it could have been in any kind of mine.” Some South African gold is reported as recycled, when in fact it has been refined, he notes.

More refineries are built in sub-Saharan Africa, such as in South Africa (which is LBMA-audited), Uganda, Rwanda, Tanzania and Mali. This is encouraging, but due diligence at refineries needs to be very good, says Ummel. He has doubts on the origins of even some South Africa imports, and says the country needs to adopt more precise reporting.

Dawance accepts that there is a risk that existing routes will be redirected, but says progress is being made. The process of tighter gold certification is likely to continue, he adds.

Risk and little reward
Harmonisation of African tax rates on gold is needed to help reduce the illicit trade. Widely varying rates create incentives for smuggling. According to The Sentry, the Central African Rebublic’s gold export tax rate is 5.25%, but the Cameroon rate is only 2.5%. DRC gold taxes are among the world’s highest at rates of between 9% and 13%; but in Uganda and Rwanda, gold export taxes are 0% and 0.5% respectively.

The picture is further complicated by the fact that taxes in the DRC vary between regions. Lebert argues that harmonising the rates is a “realistic” target that would cut out incentives to smuggle gold. Overall, she says, DRC taxes make it virtually impossible to operate legally in the country. Lebert’s Impact group is working with DRC mining authorities to redefine the sector’s tax code.

Gold smuggling in parts of east Africa, according to Lebert, takes place with an element of high-level government complicity. The loss of revenue through smuggling means that African countries have everything to gain from harmonisation, she argues. “Most countries are losing out when it comes to the gold trade. If the case for collective action can be made to create a system that brings greater benefits to all, then more governments will hop on board.”

Lebert sees a need to go back to the fundamentals of the OECD Due Diligence Guidance, which makes clear that disengagement is warranted only in the worst circumstances, such as in cases of human rights abuses or the financing of non-state armed groups. There need to be ways of incentivising companies that are sourcing from artisanal mining sources with the right due diligence systems in place, she says. “Right now, it’s mostly all risk with little reward.”