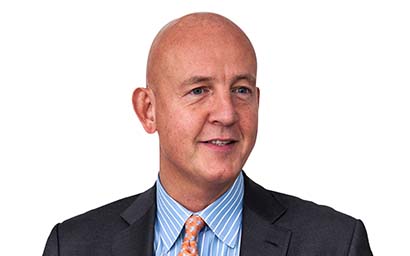 Richard Garland, the distribution head at Ninety One, gives Fiona Nicolson an insight into how the firm maintained contact with professional clients throughout lockdown – and reveals that a little magic was involved.

When Covid-19 began to impact on its business, Ninety One had to deal with the same problems as the rest of the industry. But it was also in the middle of rebranding and relaunching, following its demerger from Investec. So, how did the company manage these simultaneous challenges?

“We had invested a lot of money in technology and we also had an effective business continuity plan in place,” explains Richard Garland, managing director of the company’s global adviser business and head of global financial institutions. “The minute the pandemic hit, it was a seamless process for us to work from home and obviously you can’t do that unless you’ve got an incredibly strong platform. So, we were ready to go. In fact, the industry as a whole just carried on.”

While things went smoothly from an operational perspective, how to keep in touch with potential clients presented a dilemma, as Garland acknowledges. “One of the issues was how to prospect in a pandemic because most of the time, you can’t win new business from people who don’t know you. They like to ‘kick the tyres’. Yet initially, everyone put everything on ice.

“We also wondered whether we should be bothering clients with a call, when they’re working at home, but in many cases, people do want that connection because they don’t have it in an office environment any more.”

“Also, when financial advisers are in the office, you usually find that they have a ‘Praetorian Guard’ around them, but nowadays they pick up the phone themselves. This means we can connect more easily”.

Magic connections
Ninety One, like other asset managers, quickly migrated online to do business. But it soon became apparent that online meetings have their limitations. “The challenge with virtual communications is that on a large scale, they can be impersonal,” says Garland: “So, we also set up meetings with groups of five to ten advisers, where we had much more targeted discussions.”

“In the early days of the pandemic, when it was all so stressful and everyone was on edge, we even had magicians at some of our smaller virtual meetings. It brought a sense of fun. Obviously, there was a little bit of a sales message in there, but the goal was to find a way to make contact and keep the connection going.”

And Garland believes that the shift to online client communications is here to stay. “The whole digitalisation of this world is not going to change.”

“There will eventually be in-person events, but they will always be hybrid now. Every event will need to have a live virtual component because some people will say they’re not coming to the event, but they still want to see it. So, you’ve got to adapt your communications around your clients.”

Business as usual
It’s a tough job steering communications with clients and prospects through the chaos of a worldwide virus. It’s even more complex if the company is introducing a name change and rebranding at the same time.

“We had this huge advertising campaign planned, including taxi advertising in London, but of course, that had to be shelved because people weren’t taking taxis in lockdown,” Garland says. Ninety One has nevertheless spread its message far and wide. It invited clients from all around the world to its webinar, ‘Investing for a world of change’, which attracted around 900 attendees.

Garland is upbeat about what’s been achieved, despite the unanticipated disruption to plans.

“We’ve done a really good job of getting the name out there. But it’s probably a little bit behind where we wanted it to be, because we just didn’t have a chance to really tell the story”.

He is also positive about how the shift from Investec to Ninety One has been perceived, as he says:

“The move away from Investec has been seamless – people understood what we were doing and they see it as a positive. Obviously when you demerge, people ask what’s changed and when there’s change, people ask what it means. But as before, all we do is asset management, so nothing has changed except the name and the fact that we’re independent.”

Ninety One’s team hasn’t changed much either, although Hendrik du Toit, founder of Investec Asset Management, moved over from Investec Group to be the chief executive of Ninety One, and its chief financial officer, Kim McFarland, made a similar journey: “Otherwise it’s all the same people,” says Garland. “I’ve been here 15 years. A lot of people have been here for 20 or 25 years.” However, someone key is missing, which has not gone unnoticed in the rebranding exercise: “People keep asking us where the zebra is,” he laughs.

Summing up the transition from one name to another, Garland says: “It’s business as usual and there have been no concerns. Our clients see us as a firm that understands change and knows how to navigate it.”

Ninety One in 2021
This has been an unusual year by anyone’s standards, so how will 2021 look at Ninety One? The future is green, according to Garland, as he explains: “ESG is going to accelerate and we are going to be focused on this.” The company’s award-winning Global Environment Fund (managed by Deirdre Cooper), launched in December 2019, is high on the agenda: “Interest in our Global Environment Fund has gone ‘vertical’ in the UK – and not just in the UK, but in Europe too. We’re also doing a big push in the US, South America and Asia. So, while our focus on sustainability is in the early stages, the interest is substantial.”

In conclusion, Garland says: “2020 has been a tough year for everyone, but we’ve learned how to adapt. The pandemic has made us work harder at how best to keep in touch and the end result has been even better relationships with clients.”

“When it first started, the biggest fear was that we wouldn’t be able to connect with clients. But in fact, we are more connected now than ever.”