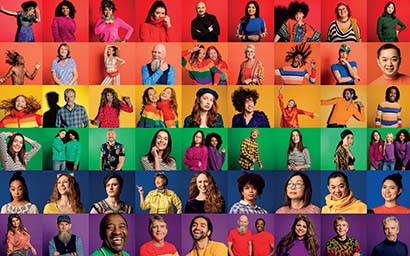 In 2020, the corporate world firmly planted a flag in the race debate. Stephanie Baxter considers what fund firms must now do to show their racial – and socioeconomic – support is not just empty rhetoric.

The investment sector has run diversity and inclusion (D&I) initiatives for years, but while improvement has been made on gender, progress on ethnic and socioeconomic diversity has been poor.

Almost 90% of senior roles in financial services are held by people from higher socioeconomic backgrounds compared with 33% across the UK working population, according to 2020 research by the Bridge Group for the City of London Corporation. A 2017 study sponsored by the Diversity Project found just under 40% of investment managers were privately educated.

The representation of black employees at all levels is also shockingly low. Less than 1% of investment managers are black, according to research published in 2019 by the Investment Association, while a 2018 New Financial study discovered just 12 black portfolio managers in the UK.

However, the tide, or at least the rhetoric around it, seems to be turning.

Black representation
Following the killing of George Floyd in the US in May, many firms rushed to issue statements saying they are against racism.

“In response, many people said, ‘Well, these statements are not enough – tell us what you’re actually doing,’” notes Marisa Hall, co-head of the Thinking Ahead Institute. “Organisations were surprised because they thought they had great D&I policies. Since then, there has been a rise in more consciousness about different types of diversity.”

Hall believes the issue is that race has been considered a taboo subject. She says: “Many organisations have said, ‘We don’t look at colour when we recruit people.’ Because nobody really wanted to talk about race, the issue didn’t get addressed.

“We at the Thinking Ahead Institute believe organisations should become more colour-brave and spend more time recognising this aspect of individual identity as opposed to trying to erase it.”

Since the summer, some asset managers have come up with targeted development programmes focused on ethnic minorities to look for talent.

The #100blackinterns initiative was launched in August to give meaningful opportunities to young, university-educated black people in investment management firms.

“It’s not enough to say there’s not enough talent – you need to go beyond the panel of people that you are going to interview before you say, ‘Well, we don’t have a pipeline,’” says Hall.

Some organisations are working with charities and going into schools and communities to talk about the industry as a possible career.

Terry Mellish, head of international public policy and D&I at Natixis Investment Managers, says the firm has historically been more focused on gender diversity but is looking at other areas, including ethnicity, social mobility, disability and mental health.

Natixis IM has been working with an external D&I specialist consulting firm on inclusion and culture. Mellish says this has helped foster courageous conversations and train the leadership teams in culture and inclusion, particularly in mentorship and behaviours.

“Without inclusive policies and the right culture, you’ll never really get diversity in a firm,” he adds.

About 8%-9% of Natixis IM’s 140-strong team in London are black or from other ethnic minorities. Almost 3% of the UK population identifies as black and in London, the figure is 13%.

He believes it is crucial that people from all levels of firms, particularly the leaders, get on board to buy into and drive change.

Benjamin König, an analyst in Natixis IM’s market intelligence team, has seen a lot of change in the conversations around this area from when he started his career three years ago.

“When I first joined the industry, I noticed straight away that very few people look like me,” he said. “While that’s still the case, more people are having the conversation about it now. The events that unfolded over the summer have helped to start a conversation, and in the immediate future I do see a silver lining with initiatives such as #100blackinterns.”

In October, the 10,000 Black Interns programme was launched by leading industry figures.

König believes now is a “good time” for people who want to break into the industry, but he does not want people to be given an opportunity just because of their skin colour – it has to be because they are capable of performing the role.

“More needs to be done to expose people with my skin colour to this industry. A lot of people might not know this industry even exists,” he adds.

“If you go on the website of an investment team, and no one looks like you, it’s quite hard to picture yourself in their shoes,” he says. “When people like me come into the industry, it can be a very scary place, especially when you don’t see people who look like you at the very top.”

Natixis IM has been involved in an initiative with the University of East London, speaking to first-year undergraduates about careers in asset management. The firm has also recently announced scholarship programme for black and under-represented minorities.

To widen its pool of applicants, investment consultancy Redington undertook a big social media campaign featuring videos of its employees from many different backgrounds.

The result? Its applicant pool increased 400% for black and other ethnic minorities this year compared to 2019.

The firm’s chief operating officer, Lee Georgs, says: “Having people that look a little bit different than what you expect in investment management makes it feel more accessible to candidates.”

The UK Diversity Project has established a dedicated social mobility workstream, to be formally launched next year, that will liaise with external organisations such as the Social Mobility Commission.

David Aujla, co-lead of this workstream, says: “The lower down that spectrum you are in terms of socioeconomics and low incomes, the less likely you are to know somebody in this industry. Many people have found it difficult to even know this industry exists.”

One challenge with social mobility is that the problem is not always obvious. It is much clearer to see if a firm is ethnically diverse or not.

“While we’ve seen relatively limited progress on social mobility in the investment and savings industry, there’s increasing awareness this issue must be dealt with,” says Aujla. “This is a great industry to work in and we need to make sure that anyone who’s capable of being a part of it should be able to.”

Another problem is the scant data on social class or mobility in asset management.

The Diversity Project’s workstream will aim to help member firms measure this. “I’d like to see better data so that we can track social mobility not just at the hiring stage, but also throughout promotions within firms,” says Aujla.

In his view, a recalibration of ‘success’ could help.

“What does ‘good’ look like at age 18 or 21?” he asks. “If someone’s the first in their family to do A-levels and go to university, but had to take a side job and doesn’t know anyone in industry, maybe a 2:1 or 2:2 is comparable to someone from a more advantaged upbringing, with access to better schooling, getting a first from a top university. A contextual approach to assessing potential is key.”

Redington no longer requires a maths degree unless the role is extremely quantitative. This has resulted in the firm getting more applicants from a whole range of backgrounds.

“For anything that’s client-facing, we will look at a much broader range of degrees,” says Georgs. “We also have removed the focus on just a few schools and universities from where we and many of our competitors traditionally recruited.”

Mentorships can help
Entering the industry can be daunting for people if the culture is not reflective of the society in which they grew up.

Hall says this is especially the case if people do not come from a well-off background. “When I first joined the industry, I remember thinking, ‘I haven’t gotten paid yet – I’ve got a month to get enough money to have a bus pass and pay my rent. It’s a real struggle,” she says.

Redington has recently assigned mentors from middle management or above to its minority-represented joiners. “We want to be able to focus on the culture that will allow them to succeed and ensure we understand what it is going to take to retain them and make them successful,” says Georgs.

For Natixis IM’s König, having a mentor is extremely important: “It gives me the perspective I’m sometimes lacking because I’ve only been in the industry for three years. I didn’t have or think that I needed a mentor when I first started working in the industry.”

Programmes like this are a good first step forward to ensure that regardless of someone’s background or the colour of their skin, they have the opportunities to pursue a great career in asset management. The industry now needs to take step two.