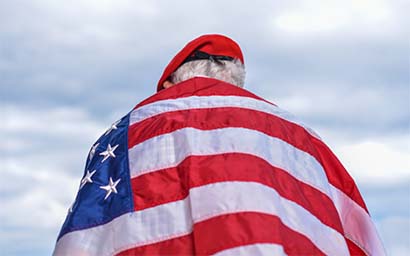 After Joe Biden’s victory in the US presidential election, Alex Rolandi asks what impact the result could have on global markets and sustainable investing.

It has been a turbulent four years in US politics. Many of outgoing president Donald Trump’s decisions while in power came as a global shock – including his decision to remove the US from the United Nations’ Paris Agreement aimed at strengthening the international response against climate change.

Joe Biden is faced with an uphill struggle – both in terms of uniting a divided population and healing the economic damage caused by the Covid-19 pandemic.

Large amounts of stimulus have already been poured into the US economy. The country’s debt has surpassed $26 trillion (€21.9 trillion), and Biden has pledged to deliver $2 trillion of additional stimulus aimed at encouraging the adoption of electric vehicles, better insulation of buildings and increased use of renewable energy in the power generation sector.

But according to Andrew Pease, global head of investment strategy at Russell Investments, the election result is arguably less important from a macro-market outlook than the outcome in the race for the Senate. These run-off races in the new year will do much to affect the course of the next four years.

“A divided government will make it difficult for President Biden to raise the corporate tax rate or to substantially increase regulation on technology and financial firms. This will be a positive for equity markets and at least partly offset the disappointment of less fiscal stimulus,” he tells Funds Europe.

For Vincent Reinhart, chief economist and macro strategist at Mellon, the next focus of market attention will be this additional fiscal stimulus – “a hope likely dashed in the interregnum”.

“Concerns raised over the pace of the economic rebound should cement the view that the Federal Reserve will indefinitely pin the policy rate to its zero lower bound, keeping Treasury yields low or even sending them lower in the short run,” he explains.

There is also the ongoing US-China trade war to contend with. As Reinhart says, “dealing with China could prove especially problematic” as the Biden administration is likely to focus more on human rights and working standards.

Corona and US drove investors to China/EM in October

Trump-era tariffs are likely to be rolled back – including those on aluminium and steel – in order to act as bargaining chips.

According to Reinhart, this bargaining is more likely to be done at the multinational level, as foreign policy will be much more welcoming to traditional partners than the Trump “go-it-alone” style.

“China is most likely to accede to the changed relationship, pivoting inward as its domestic economy enjoys the heft necessary to sustain growth. This environment favours continued opening of domestic markets and a gradual, moderated appreciation of the yuan,” the economist predicts.

Inflationary pressure
Even before the US election result was confirmed officially, credit markets had been responding well. Positive news on the Covid-19 vaccine front also aided the post-election rally seen across many sectors, from commercial to real estate.

Inflation is an increasing concern for global institutional investors – as is the ongoing issue of liquidity.

The US Federal Reserve has allowed inflation to run ahead of its historic 2% target, while the incoming administration is likely to be more supportive of accommodative monetary policy.

According to fixed income specialist Tabula Investment Management, Biden’s appointment of ex-Fed chair Janet Yellen to the role of Treasury Secretary suggests “a close tie-up between fiscal and monetary authorities”.

The fund manager warned that these factors, combined with the demand/supply fallout from Covid-19, mean that inflation is back on the agenda.

Newton’s Cunningham says: “While we doubt monetary and fiscal stimulus will be withdrawn any time soon, there will come a point when investors have to contend with the possibility of higher inflation, reduced monetary stimulus and higher yields.”

In this scenario, long-duration high-quality credit would be most vulnerable. “The exit could become crowded,” says Cunningham. With this in mind, he suggests a “barbell” of more liquid government bonds and shorter-duration high yield bonds could offer a better risk-reward profile than investment grade going into 2021.

In the fixed income world, it’s not uncommon to see lower liquidity towards year-end as the sell-side prepares to slim balance sheets while the buy-side closes its books. However, according to Tabula, “uncertainty this year means liquidity could prove worse than in recent history”. The firm told investors to “hope for the best but prepare for the worst”.

Sustainable promises
During his time as president, Trump shunned climate science and sustainability, backing coal and fossil fuels instead. Following Biden’s election, sustainability is back on the agenda.

For Florence Barjou, chief investment officer at Lyxor Asset Management, the effects of a Biden presidency from an ESG perspective could be “sizeable and far-reaching” across economies and financial markets.

“The $2 trillion green plan, devised during the election campaign, will need to be financed somehow, with a boost in green bond issuance an obvious and likely outcome,” she says. Substantial increases in the use of clean energy are to be expected.

“ESG investing could receive a massive boost as a result in a market that, despite its unparalleled size, has long lagged behind Europe, particularly if investment providers can mobilise retail investors and private savings to match the increasing use of ESG products in the institutional market,” Barjou argues.

Data from Morningstar shows that global flows into ESG funds were up 14% by the end of the third quarter in 2020, totalling $80.5 billion. Europe continued to dominate the space, taking over 75% of overall flows, while the US took 12%.

The global landscape: Spinning on a sustainable axis

Data provider Preqin recently stated that “concerns about over-regulation and reporting burdens are acting as a barrier to uptake” of ESG in the US.

According to David Riley, chief investment strategist at BlueBay Asset Management, a Biden administration will be negative for the carbon-based energy sector in the country. But, he adds, it is “a positive development” for many European companies that are global leaders in energy efficiency, clean transport and renewables.

Biden’s sustainability targets include an emissions-free power sector by 2035. This will require a substantial rise in the use of clean energy across various sectors. “The outcome of the US election will reinforce the shift towards sustainable investment, including amongst US investors that currently lag well behind European investors in terms of adoption of ESG principles,” says Riley.

How Sharia and sustainable investing are converging

Biden’s election could also prove favourable in terms of the US integrating more ESG practices within its own companies and their investors.

Andrew Parry, head of responsible investments at Newton Investment Management, says: “It also looks more promising at a global level – Korea and Japan have signed up to net-zero for 2050 and, more importantly, China by 2060; even Russia is contemplating such a pledge.”

According to Parry, the US energy market is increasingly driven by pure economics and not policy – and demand is rising for renewables, which are becoming increasingly cost-competitive with fossil fuels.

“Even despite a Biden presidency, the fossil fuel industry is increasingly aware that it faces a challenged future, with demand, even in the developing world, set to diminish over the next decade. In our view, oil companies are also increasing their investment in renewables, carbon capture and hydrogen as they try to remain relevant in a changing world,” he says.

Sustainability is nothing new, as investors around the world increasingly see sustainable strategies aligned to their financial needs – but there is likely to be more growth in ESG investing in the US over the coming years. As Parry says: “Sustainable themes resonate, as they are about where the world is going and not about clinging to the past.”