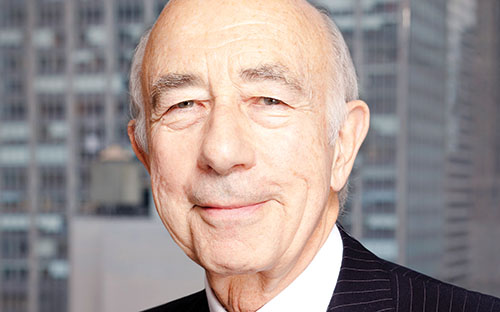 George Muzinich’s eponymous firm has stuck to fixed income for 31 years. Once “awed” by corporate bonds, the firm has since branched into less vanilla debt investment against a background of lower yields. Nick Fitzpatrick reports.

George Muzinich has been leading Muzinich & Co through the US and international bond markets since he founded the New York-based firm in 1988. At that time, bond yields were high and to be a bond fund manager was to be in a sweet spot.

That has all changed now, of course, with developed market government bonds offering negative real yields. Bond funds may see sudden inflows, but it’s more a sign of investors retreating from risk than hunting for yields, which are barely existent in most quarters.

For his part, Muzinich has diversified the firm’s fixed income offering not only into emerging markets, but also structured credit and the asset class du jour, private debt.

But as he sees it, there are still opportunities to be had in credit, even if the great bond bull market is behind us.

“If I told you we can potentially make you 3%-5% return with a high degree of conviction and that it will protect you well in a market downturn, would you throw me out the room?”

He’s talking about corporate bonds, explaining that the opportunity in bonds lies in distinguishing between government and corporate debt for the best risk-adjusted returns.

“When Armageddon comes and there is a sharp decline in equities, bonds will do better than a lot of other assets.”

He adds: “The question is of relative appeal. Everything is expensive now, but on a relative basis, I firmly believe corporate credit is one of best asset classes around.”

$13 trillion debt
Given that it is 31 years since Muzinich launched the firm, which now has $36 billion (€32.5 billion) of assets under management, he’s seen a good deal of change, including the globalisation trend of the 1980s, considerable innovation in bond markets and several financial crises.

In the current environment, he says: “It’s particularly difficult. We have no historical precedent for the $13 trillion of negative-yielding debt. We are dealing with a period of tremendous change.”

Is he confident in policymakers, like the Federal Reserve?

“Confident with a capital C!” he says, adding: “I believe the Fed will stay independent and they have done a reasonably good job. Their policies seem to make sense.”

He also says, however: “Where we once had a relatively risk-free asset such as the ten-year sovereign bond, sovereign is probably the most risky asset right now.”

Sovereigns may offer some good short-term trades and there will be investors who need to buy bonds to “balance their books”. But with the ten-year bond offering negative rates, “do you really think you will protect your purchasing power?”.

Asked whether the growth in debt is something to worry about, he points to the crash in 1989 – a year after the firm’s launch – of the high yield ‘junk’ bond market and how this taught him to appreciate corporate debt.

“We were in awe of the resilience of the asset class,” Muzinich says, “and its ability to protect capital in a falling market.” He adds: “In the last ten years, money has become very cheap. When something is cheap, you take advantage of it. Apple does not need money but borrows because it’s cheap. It’s logical that companies are doing this.

“Around 50% of investment grade bonds are rated triple-B now. It used to be much, much less than that. So there has been a migration towards more leveraged balance sheets, but high yield has stayed fairly stable.”

The firm’s most recent development within high yield was the 2018 launch of an Asia high yield strategy, and recent years have seen more Muzinich activity within fixed income.

As well as creating a syndicated loans team in London, since 2014 the firm has launched and expanded private debt strategies in Europe, where new sources of finance – such as fund managers – are rising to fill the gap left by the region’s banks.

“Private markets are different to public markets and clearly there is a need for more due diligence in private markets,” he says.

The private debt strategy in Europe started with a focus on Italy and Iberia, followed by the UK and France in 2015 and more recently the launch of a pan-European platform.

Through the launch of a European Long-term Investment Fund (Eltif) this year – the Eltif being a “well thought-out programme” by Brussels that introduced the structure to support the European economy – Muzinich says it will be possible to give retail investors the chance to invest in mid-size companies through private debt.

Essential
Private debt appears to be one of the most sought-after asset classes among institutions in Europe. Asset manager Natixis recently found that more than 60% of 200 chief investment officers from European insurance companies considered private debt and other alternatives as “essential” for combating low yields and gaining diversification – although many of them said there were regulatory barriers to entry.

Institutions are increasingly calling for environmental, social and governance (ESG) investing, too – or so a multitude of surveys suggest.

As a bond firm, Muzinich & Co says it considers ESG criteria when investing in public and private debt, in particular to look for governance ‘red flags’ that may pose a credit risk.

But bond managers are surely hampered when it comes to ESG investing that focuses on company engagement. Here, shareholders have all the power.

“Will companies listen to bond investors? Our impact is perhaps more muted than for equity investors because the latter are owners. But on other hand, if people want to borrow money, they also need to listen to us,” says Muzinich.

The trend for ESG is arguably stronger in Europe than in the US, though he says we should not play down ESG’s importance to US investors. He notes that the state of California is “as advanced as anyone” at ESG investing.

Another trend among European distributors, which should be key to a firm like Muzinich, is how they have been seen to gravitate towards working with fewer asset managers in recent years and buying a larger amount of funds from them. This could potentially make life tough for managers with fewer assets under management and fewer products. Then again, like other mid-sized specialist managers, Muzinich may demonstrate a tendency to be more focused.

Its founder accepts that the landscape is challenging, but has a message for distributors. “There’d be nothing worse than having a very limited number of large institutional asset managers investing your money,” he says. “This would potentially lead to a herd mentality, more volatility and poor performance.”