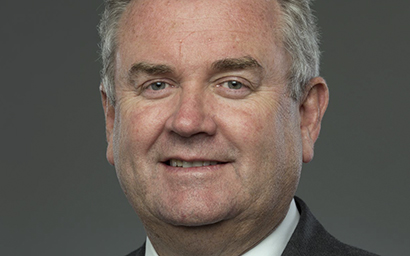 Campbell Fleming, head of distribution at Aberdeen Standard Investments, discusses the practicalities of the Aberdeen/Standard Life merger, what to expect next and why more firms should have joint chief executives.

There can be little doubt what has been front and centre for Aberdeen Standard Investments this year. The merger between Aberdeen Asset Management PLC and Standard Life PLC is a huge undertaking and a game-changer, not just for the two companies involved but for the global asset management industry. Analysts may have dubbed the merger ‘defensive’ but it creates a £583 billion (€641 billion) investment colossus that is the largest active manager in the UK and the second-largest in Europe.

“We are being seen in a new light as a large-scale provider,” says Campbell Fleming, head of distribution at Aberdeen Standard Investments. “Everybody gets it. They understand that these days, you have to be very large or very small.”

A large merger always excites concern both among clients and staff, and Fleming is clear that the full merger will take time: two-and-a-half years, to be precise. But according to the former Aberdeen AM distribution head, both firms enjoy “significant goodwill” and the task of creating a coherent new entity has been simplified by a very small overlap of 4.5% among clients.

“If you take the top 50 clients of both firms, there are only four in common,” he says.

There is, of course, greater overlap among staff. However, Fleming is hopeful that for the merged firm’s 9,000 employees, the transition won’t be as painful as everyone feared, noting that asset management firms have a turnover of 5%-15%.

“There are some staff affected, and I don’t want to de-emphasise that, but we hope to take advantage of turnover rates,” he says.

According to Fleming, there isn’t significant overlap in portfolio managers. The overlap is more in areas such as sales. However, there is also an overlap right at the top, which has raised some eyebrows. Keith Skeoch and Martin Gilbert have embarked upon the difficult task of sharing the role of CEO. Will Fleming’s old boss, the entrepreneurial Gilbert, be able to hack it? According to Fleming, the joint CEO scenario is working well – indeed, he thinks more firms should try it.

“They’re both great people to work for and very complementary,” he says.

A clear division of roles is perhaps helping to make this unusual set-up work. Gilbert is responsible for client-facing sales while Skeoch, who is “a fantastic economist”, concentrates on the investment process.

“It’s really interesting what Keith is doing with the investment process,” says Fleming. “And Martin is getting out in front of clients and shareholders and making sure we get them at the centre of what we do.”

Scotland and Brexit
One thing that the merger seems to have delivered already – certainly compared to any potential alternatives – is a continued commitment to Scotland. Edinburgh is home to Standard Life, and Aberdeen Asset Management – in theory at least – remained headquartered in Aberdeen throughout its existence.

“It’s always good to do the right thing by Scotland,” says Fleming. “That’s our heritage. Edinburgh will remain a big centre.”

Back in 2014, at the time of the referendum on Scottish independence, there was lot of noise about Standard Life moving its headquarters to London in the event of a ‘yes’ vote. The vote was ‘no’, and it remained in Edinburgh, but now there is Brexit to contend with. Is the UK’s new industry leader in terms of size worried about the potential fallout from a hard Brexit?

Campbell concedes that Brexit is “a bit of a challenge”. However, one of the beauties of size is breadth. Aberdeen Standard Investments has all the jurisdictions and all the fund structures it needs to cope, come what may.

“It will be a recalibration rather than a fundamental rebuilding,” he says.

Grand vision
Rather than Brexit, the merged firm’s focus is on returning to net inflows. To do that, it will be emphasising the new breadth of its offering.

Last year was, of course, a difficult year for emerging markets – Aberdeen AM’s signature strength. But the merged firm is not so desperate for net inflows that it has dropped its 2% initial charge on the stellar emerging-markets fund.

“Flows have abated a bit because we kept the 2% initial charge to stop hot money coming in,” says Fleming. “But the business has been doing pretty well with a diversified set of inflows across many asset classes.”

Expanding the firm’s global footprint is also an important goal. “Martin has made it clear we need to do better in the US,” says Fleming. In concrete terms, doing better means “it would be nice to have 30% in the US rather than 10%”.

The merged firm hopes to use Standard Life’s alliance with John Hancock to drive that forward. It wants to go after wholesale and service the world’s largest pension funds.

“If the right partner comes along, who knows, we might even do an acquisition,” says Fleming.

In the meantime, the firm, which invests in 24 markets and has offices in 50, is balancing expansion in developed-world markets, such as the US, with an increased presence in the developing world that it knows so well as an investor.

“China is as big as America now as an economy,” says Fleming. “If you want to grow, you have to be in these areas.”

As well as that, he says, increasingly you have to be a partner to investors, who want “to grow with you globally”. A growing part of that is engaging with environmental social and governance (ESG) investing – an area where Standard Life has been a leader.

“Clients, especially millennials, want you to be a good guardian of assets,” says Fleming.

The vision for the merged firm is grand: a large, diversified, global player that delivers returns and does the right thing, whether that is about staying true to your heritage or embracing ESG.

“If it works, it will be a very fine thing to have been involved in,” he says.