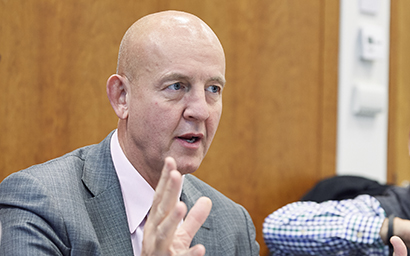 Investec’s Richard Garland talks to Tim Steele about an industry adjusting to fee pressure and which is now at a Napster-style inflection point.

“And I don’t think asset managers are fully awake to it,” says the managing director, who runs Investec Asset Management’s global adviser business and global financial institutions group, as well as being directly responsible for Investec’s European and Americas advisory businesses.

“We have fee compression, rising regulatory and compliance costs, and we are now going to be absorbing the research costs. These are seismic shifts.”

The imminent arrival of the second Markets in Financial Instruments Directive (MiFID II) is set to accelerate the changes currently underway around the distribution of funds to investors, he argues.

MiFID II’s curbing of adviser rebates (the traditional incentive offered by asset managers to intermediaries, including funds of funds, private banks, wealth managers, and financial advisers) and a clampdown on the provision of independent advice to investors has led many distributors in Europe to redefine themselves as ‘non-independent’ – and hence still eligible for rebates.

Given the squeeze on revenues and the complexity of the rule changes, Garland expects MIFID II to hasten a shift among distributors to work with fewer asset managers. “Certainly, many of the large banks and private banks have declared themselves to be ‘non-independent’ under MIFID II,” says Garland. “But by extension, if you are not independent, by definition you are not going to be open to working with everyone.”

The same thing is happening in the US with the changes to the Department of Labor Fiduciary Rule: “Firms like Merrill Lynch, Wells Fargo, UBS and Morgan Stanley are all working with fewer managers and fewer funds.”

“We are getting constant requests to reduce our fees on our funds,” Garland says.

Fierce spotlight
MiFID II’s push for greater transparency around payments for investment research has placed the industry under a fierce public spotlight. Not all managers have decided to absorb the costs of external research under MiFID II; some will continue to pass on those costs to investors. It is a decision Garland contends is hard to justify.

“Other managers have only chosen to do it for their European business, but how can you ask an institutional client in the US to pay for research when their European counterpart does not?” he asks. Investec has taken a holistic view – “the right view” – and chosen to absorb its research costs globally, he adds.

MiFID II is also driving a shift from institutional to sub-advisory in Europe and accelerating fee compression, says Garland. In light of these factors, Investec is pursuing a highly targeted distribution strategy that focuses on working with a limited number of partners. “The key for us is not being a top 20 manager by assets,” says Garland. “Rather, as these distributors partner with fewer and fewer managers, we need to be in the group of 20 to 30 managers they do work with.”

With one exception, Investec has strategic partnership arrangements with all the big distributors, he adds. “With our roots in South Africa, we grew out of an emerging market. So we are seen as different, and hence complementary, to the large asset managers that came out of London or New York. All we do is active management and increasingly we are focused on unconstrained portfolios.

“The key with equity funds is to have a high active share, so not look like the benchmark, and have a high-conviction, concentrated portfolio. We have one fund, Global Franchise, with just 25 holdings, which is pretty high-conviction, but a lot of our equity funds and strategies tend to have 50-60 holdings. That sort of concentration means you can’t easily replicate them.”

Looking forward into 2018, Garland will, as befits his enlarged responsibilities, be focused on doubling down on Investec’s push into the European adviser space. At present three-quarters of the firm’s assets in Europe, excluding the UK, come from institutions.

While this broadly reflects Investec’s global asset base – with 70% of the €106 billion under management coming from institutions, as of June 30, 2017 – Garland is determined to recalibrate that adviser/institutional contribution towards a 50-50 asset split in Europe. More broadly, he is also looking for continental Europe to double its present contribution to the firm’s asset base from 10% to 20%.

“With the change in demographics, the death of the DB pension fund and the growth of DC, the power shifts to the individual, so you have to be focused on that part of the market, which is still a growth area,” says Garland. “Our advisory business is growing faster than institutional – indeed, this year advisory is having its best ever year on the back of very strong fund flows in Europe, the Americas and the UK.”

The firm has concentrated on building its distribution teams, with a specific focus on Italy, Spain and Germany.

“We now have a better balance, everything is well aligned,” he adds.

As a medium-sized active manager, it might be argued that Investec is somewhat exposed in the current environment. Garland disagrees. When it comes to the issue of size, he argues it is the boutiques who are under threat.

“For some private banks, if you can’t offer them a vehicle in every jurisdiction – if you don’t have a 40 Act fund, a Luxembourg or Dublin fund, an Oeic – then they don’t want to work with you,” he maintains. “They want to use you in a vehicle-agnostic manner. And if you are a boutique, you can’t operate in all those markets.”

As for passive versus active, Garland argues that the adversarial framing of active and passive misunderstands the relationship between the two approaches. It is not a case of one being ‘better’ than the other. “In fact, it is not one versus the other – rather, it is about building a portfolio that has a reasonable cost to the end client.”

One way to bring that cost down is to include some passive components with fees in the one-to-two basis point range, and then complementing them with some active funds. “You are just creating higher and lower-cost elements within the portfolio,” he says. “That is why this move to passive is not cyclical, it is structural.”

The typical ‘balance’ of those elements within a client portfolio will be 20%-30% passive, some local variations aside: “As an active manager, we have to live with that fact. It is a barbell, with passive at one end, alternatives at the other, and active in the middle. So active is getting squeezed.”