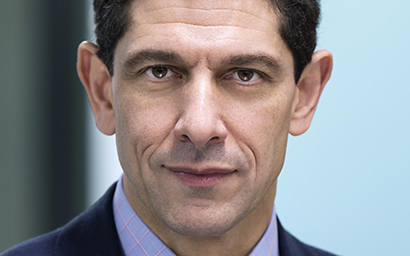 Two years into his job as Schroders’ global head of distribution, John Troiano tells Mark Latham about how the firm continues to buck the trend towards passive investment and its preparations for MiFID II and Brexit.

After years in the doldrums, current market conditions could finally be turning the tide back towards active management.

In the years since the global financial crisis, sustained periods of underperformance by some traditional active managers have led many investors to switch their money into cheaper index-tracking exchange-traded funds (ETFs).

Is that a route that Schroders is contemplating now or could contemplate for the future?

After what John Troiano, Schroders’ head of global distribution, calls a “really excellent” year in terms of retail sales in the UK and continental Europe, the firm is sticking to its guns.

All of Schroders’ current assets, amounting to £430.2 billion (€488.3 billion) – an improvement on the £375 billion figure 12 months ago – are managed actively and that is not going to change any time soon.

“We are not going to go into the passive business,” Troiano says adamantly. “In everything we look to do, the question at the forefront of our minds is: what is the value that we can add as a firm?

“Clearly within passive, you have some very large and very able firms which are bringing a wealth of products into the market place at very keen prices, but that is not where we want to go.”

Troiano says that the trial launch of an active ETF in Australia last year was successful and could lead to the launch of further active ETFs in the future.

The Schroder Real Return - Australian ETF has doubled in size from 21 million Australian dollars in the 14 months since its launch.

Asked whether the fund’s success could lead Schroders to launch other ETFs, Troiano says it is a possibility “but the reality is that relative to the total size of our business, the market is growing quite slowly.

“We need to keep a sharp eye on it because if things change quickly, we want to be prepared.”

The fund targets a return of 5% over the Libor rate and is, he says, “very much” an active multi-asset strategy.

“It was launched specifically with a view to being a default offering in defined contribution, so if somebody wants to save for their retirement instead of using securities directly, that would form a logical equivalent of a fund to hold,” he says.

A core of the business
If Schroders decides to launch further active ETFs, the most likely markets, says Troiano, are those – such as the US – where there are benefits to holding ETFs for retail investors over a mutual fund equivalent.

However, Schroders’ preference for the active approach has not stopped it from using passive products within its multi-asset offering.

“For example, if clients have a fee budget they want to get within, we may well use passive exposures within mandates to keep costs down,” Troiano says. “But then we would buy those products in, rather than sell our own passive products.

“If the active management industry isn’t able to deliver funds that consistently beat the passive alternatives, they haven’t really got a right to sell them.

“Fortunately we have got a long history of doing a very good job on the equity side. It is one of the core strengths of our business and we are well known for it. People can still see value in both propositions.”

One of the biggest shifts within the industry at the moment, observes Troiano, is increasing demand both from individual investors and intermediaries for outcome-based products rather than pure bond or equity funds.

“What we are seeing is a big increase in demand, for example, for income products with fixed level of distribution or funds targeting set levels of return with some constraints or protection on the downside: in other words, funds targeting an absolute or target rate of return,” he says.

“What that means is that the vehicles used to deliver outcomes are frequently multi-asset vehicles.”

Troiano says that Schroders’ core business strategy has not changed in recent years but “has evolved and developed” in a number of areas.

“Firstly, our core strategy has been essentially to have a diversified business model both by product and geography, which has been a key reason for the consistency with which we have grown as we are not overly dependent or any particular product or geography.

“The second leg of our strategy is that we want to drive our growth organically and the bulk of what we have done has come from building our own listings businesses.”

Asked about the largest business opportunities for the firm at present, he cites the US, China and Japan.

At the product level, there have been a number of changes at Schroders since Peter Harrison took over as chief executive 18 months ago, as one of Harrison’s aims has been to expand the product range in the areas of alternative and private assets.

Last year, this led to Schroders acquiring the Swiss private equity company Adveq Holding. This has added to its capabilities in insurance securities, infrastructure debt and asset-backed securities in the US.

“I think we are going to continue to build our capability in private assets and private debt is an area where we may well be quite active,” says Troiano.

In addition, he cites a strategic relationship with the US fund company Hartford Funds, entered into towards the end of last year, as a significant recent development.

The deal, which has involved Hartford assuming the distribution of Schroders’ branded US mutual funds, “has really accelerated the growth of our intermediary business in the US”, he says.

The funds, which include equity, fixed income and multi-asset strategies, collectively have $2.2 billion (€1.8 billion) in assets under management.

On the question of MiFID II, the EU’s revised capital markets rules, Troiano is confident that everything will go smoothly when the regulations come into force on January 3.

Like the vast majority of asset managers, Schroders has decided to absorb the cost of broker research on to its own balance sheet.

Schroders is also, he believes, well prepared for the various possible outcomes of Brexit. The firm is fortunate, he says, in having an extensive network of offices in continental Europe and the main fund hub for the group is in Luxembourg, from where the firm’s funds are sold globally.

“In terms of permissions, structurally we have no issues with Brexit, other than having to apply for a slightly extended licence in Luxembourg which will permit us to delegate segregated mandates outside the EU,” he says.

“Other than that, our current fund structures work very well because we have a Luxembourg structure for unit trusts and also a UK structure.”