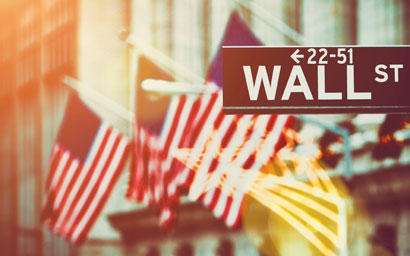 The financial crisis of 2008 spawned a range of new product types as asset managers sought to regain investors’ trust – and their money. George Mitton reports.

“[It was] believed that the collapse of the subprime mortgage market was unlikely precisely because it would be such a catastrophe,” writes Michael Lewis in his book, The Big Short. “Nothing so terrible could ever actually happen.”

Of course, the catastrophe did happen. The subprime mortgage market imploded, asset values plunged, and the world endured the worst financial crisis since the Great Depression.

For asset managers, 2008 was a sobering experience. It revealed, to many clients, the inadequacy of the investment strategies they had been sold. Equity funds, bond funds, balanced funds – almost any kind of fund, in fact – lost money.

According to Amin Rajan, chief executive of Create Research, the crisis was a defining moment. “Diversification failed when it was most needed,” he says.

ONGOING EFFECT
In many ways, the crisis continues to shape the asset management industry today. In a recent report, Rajan identifies six product types that have been developed or popularised since 2008 (see box).

While there is room for cynicism here – some might claim asset managers have repackaged old goods with new names – it is hard to deny there have been big changes in product development since the subprime market collapsed. In many ways, funds have become more complex. This has positive and negative effects.

On the one hand, clients seem to desire these complex products. The popularity of the Standard Life Investments Global Absolute Return Strategies (GARS) fund, for example, demonstrates that retail investors as well as institutions feel the need for a fund with exposure to a wide range of asset classes. Rajan asserts that multi-asset funds are the fastest-growing fund type in Europe.

On the other hand, these funds are relatively expensive for asset managers to produce while being comparably challenging for the end investor to mentally grasp. Regulators have also voiced concerns that complexity is itself a structural risk. In The Big Short, Lewis suggests that the complexity of the mortgage debt market in the US – with its baffling range of terms such as collateralised debt obligations – was at least partly to blame for its collapse.

PAIN
Another post-crisis trend has shaken up the asset management industry: passive investing. Exchange-traded funds (ETFs) now account for a tenth of global industry assets, according to Rajan’s figures. Although some asset managers have significantly increased their assets as a result of ETF growth, others have suffered.

“The move to passive has put the industry’s revenues under pressure at a time when expenses are going up because of globalisation and compliance,” says Jim McCaughan, chief executive of Principal Global Investors. “This has become a much tougher industry than it was.”

McCaughan says almost every global asset manager has suffered a decline in revenues due to the rise of passive investment, “even those who have had very large inflows”. Indeed, he says, passive products are themselves the arena where fee competition is most intense.

One interesting consequence of this war is that assets under management (AuM) have become less useful as a guide to asset managers’ profitability. In many cases, the firms with the most assets have, in proportional terms, some of the lowest revenues on their assets.

“AuM is no longer as good an indicator as it used to be given the commoditisation of certain products,” says McCaughan.

LOOKING AHEAD
Are there lessons to be drawn from the crisis as asset managers look to the future? The truth is that financial crises are hard to predict. That is their nature. If they were predictable, they might be averted. Lewis’s book – which has been made into an entertaining Hollywood film – tells the story of a handful of hedge fund managers who saw the subprime crash coming. Their story is compelling precisely because their opinions were seen, at the time, as eccentric, if not delusional. 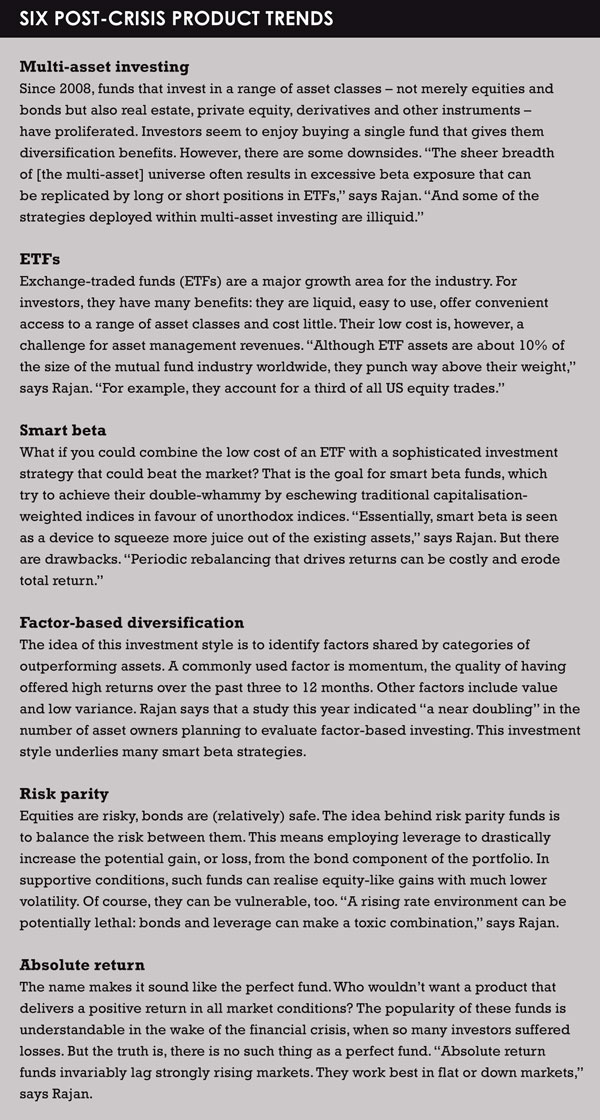 Whether any of the fund types outlined by Rajan are capable of protecting investors’ assets in the event of another 2008-type event is questionable. Even absolute returns funds, which seek to provide a positive return in all market conditions, are vulnerable in unanticipated scenarios. Their use of long-short positions can be particularly costly if managers make the wrong call.

What asset managers ought to do is identify trends in the investment world and build their product ranges around them.

“Predictions about demographics are much more reliable than predictions about the economy,” says McCaughan. “We know we have an ageing population. We know there will be more retired people. We know they will want to turn their assets into income. That’s an opportunity for asset managers.”

Regulation provides another opportunity for fund product developers. In Europe, Solvency II puts a burden on insurers to meet capital requirements. Asset managers might succeed by providing tailored funds to help insurers comply with the rules.

FRESH AND EXCITING
There will always be an incentive to produce new funds with appealing new names. It is easier to sell something that sounds fresh and exciting than something familiar and humdrum.

Given that asset managers depend for their revenues on successful marketing, it is no coincidence that the industry has proved adept at producing a plethora of product types. The 2008 crisis gave a push, but this is something the industry might well have done anyway.