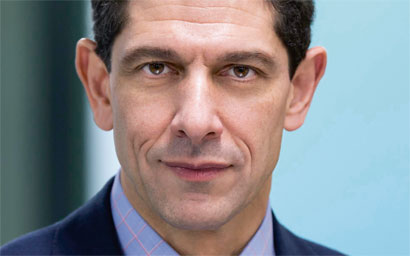 John Troiano became Schroders’ distribution head in 2016. He tells Nick Fitzpatrick about the firm’s strategy, which may include more active exchange-traded products.

British fund managers ignore the ETF business almost studiously. While some US and European firms with active businesses have embraced ETF product launches, UK active houses eye the growth of passive exchange-traded funds with a range of feelings, hardly any of them positive.

Yet far away from its London headquarters – in Sydney – the fund management firm Schroders has a little ETF experiment going on. In August, it launched the Schroders Real Return Fund. In fact, it’s an exchange-traded managed fund (ETMF), or active ETF, listed in Australia, and aims to give Australian defined contribution (DC) pension savers a return above inflation.

John Troiano, Schroders’ global head of distribution based in London, says: “Up until now, we haven’t entered the passive business through segregated accounts, unit trusts or ETFs, and though I’d never say never, I doubt we will.

“However, we have launched an active ETF in Australia targeted at the DC market. It’s an experiment – a real-return fund suitable for a core investment in DC. We are watching it carefully and considering the extent to which people will want to access our strategies through active ETFs.”

If people want to access Schroders’ goods through these structures, the firm will look at that more, Troiano says. Schroders’ Australian ETF had a market capitalisation of about 21.5 million Australian dollars (€15 million) and a return of 1.42% since inception, as at December 15, according to ETF Watch.

EVOLVING STRATEGY
Offering this investment portal is one way that Schroders is responding to distribution challenges that are found across fund management client segments, from the high-net-worth market controlled by global platform providers like UBS and Citibank, to the mass retail market where small, tech-led robo-advisers are creating the future. Troiano, who was appointed global head of distribution earlier this year, has to evolve his predecessor Massimo Tosato’s strategy for these and other routes to market.

“Partnerships are becoming really important and we are building strong relationships across multiple products and delivering more than just investment returns,” he says.

By this, he means building services that support a distributor’s or pension fund’s desired investment outcomes – or even broader business activities such as reporting. “Sales and servicing people need to be much more knowledgeable now, so they can talk with clients about objectives,” he says.

In an era of outcome-led investing, Troiano points to Schroders’ income suite as a crafted response to this trend. The fund suite started with an Asian multi-asset income fund designed to meet demand among Asian clients who were facing low returns in the depressed interest rate environment. The fund spawned a global multi-asset income fund for the same ends and a wider clientele.

“We were early in those areas,” says Troiano. “We were very nearly first to market with the Asia and global income funds and we spread them globally. They have since become popular and recognised.”

A broad product set is important for asset managers in the wholesale distribution market, where distribution is partly shaped by the Market in Financial Instruments Directive II (MiFID II).

“We have as broad a product range as any manager,” he says, when asked how he’ll ensure Schroders remains on buy-lists, adding that the firm is looking to build real return offerings and taking an interest in capital protection.

Troiano thinks firms need to steer the discussion away from the obsession with funds fees. “The focus is enormously on cost and I’d like to move the debate back to investment returns. This is what will determine the size of your savings and pension.”

The main change he would like to make to the industry involves refocusing the debate to the return element, he says, adding that the asset management business has not done a good job at explaining its value to people.

Meanwhile, the FCA report also put a focus on the independence of fund boards and how independent directors could support investor interests.

Defending asset management in light of these topics, Troiano says: “The industry takes a lot of effort now in checking that new products are suitable, and disclosure has increased.”

He adds that Schroders has independent directors on its Luxembourg fund boards, though they are in the minority, and says there will be more independent board members on UK boards.

PROFITS
Investor protection is the aim of regulation and shrinking buy-lists are a way for distributors to handle the associated complexity and risks. Yet for global distributors, Troiano says a major driver for this paring back of fund houses is also revenue.

“I think the biggest driver is costs and profitability. Distributors are looking to aggregate up larger mandate sizes and they will look at pricing. I’ve seen that not only in global banks but also among local authorities in the UK. Simplification helps distributors handle regulatory risk with simplified models for their clients – but the primary benefit is commercial.”

Schroders has been successful at accessing global distribution platforms, he says.

“Where global firms have consolidated partnerships, we’ve been successful. When we had the pitch, we’ve won it.”