Global equity funds largely failed to make people wealthier over twelve months to June 30. Nick Fitzpatrick asks if low holdings in the emerging markets and higher holdings of European firms had anything to do with it.

Cast an eye over global equity fund returns and it’s like a world weather chart. Grim in some places, but bright and sunny in others. Overall, though, it was bad weather for many.

Returns showed that, on average, people who invested in this fund sector for twelve months until the end of June were probably poorer than when they started out.

Annual inflation in the European Union measured 2.6% in June, but many global equity funds on sale in Europe failed to beat or even match this.

The average one-year euro performance among Lipper’s global equities sector for funds domiciled in Luxembourg was a loss of 1.2% at June 30. In total, 364 out of 575 funds did not beat the inflation rate.

Some did manage to stamp down on inflation, though. The average return from the top ten performers in global equities – again measured in euros – was 20.3%. (The average loss for the bottom ten was 35%.)

So what did the top 10 funds do to create such an inflation-busting return? Several distinguishing features jump out – not least that the majority of the top ten are dollar-based funds. The euro has fallen against the dollar over the past year. But the effect of this on fund performance can be mixed (see box).

As well as this, all the funds had a large amount of holdings in US equities; a reasonably high percentage of UK holdings; and less than average holdings in Europe ex-UK.

Regardless of whether this configuration causes surprise, what may well look strange is the low percentage of holdings in emerging markets. The funds’ holdings in Lipper’s designated global emerging markets sector were under 6%. Emerging markets might not have had their best year, but emerging market holdings by the global equity top ten were extremely low for an asset class that’s often touted as the most important equity allocation of the future.

For example, the Investec GSF Global Opportunity Equity A fund, a dollar-denominated fund and the second-best performer with a 25% return in euro terms (9.39% in local currency), had just over 5% of its holdings described as Global Emerging Markets. These 5% contrast markedly with the fund’s 36% of holdings in US stocks and – given Europe’s problems – a notable 29% of holdings in Europe ex-UK. This was the highest among Investec Asset Management’s top ten peers.

But all is not as it seems. The fund has a larger exposure to emerging markets than the basic holdings data implies because many of the western-market companies in Investec’s fund receive revenues from those high-growth parts of the world in the South and East.

Overly negative market
Clyde Rossouw, fund manager, says the biggest driver in the fund over twelve months was US and Belgian-listed ABI InBev, a beverage maker with Budweiser among its brands. The company has significant exposure to Brazil and Latin America and moderate exposure to Europe, he says.

“We took a big weighting in ABI InBev in August last year. It was 4% of the portfolio and in the top ten of our holdings.”

The fund bought the stock on a 12% free cash flow yield, which Rossouw says is unusual for a beverage maker. At that time he felt the market was overly negative on the depreciation of the Brazilian real and the prospect for expensive corporate action. He also thought that other investors had not spotted the extent to which ABI InBev had globalised its sales.

Developed world companies Rossouw invests in derive about 40% of their revenues on a see-through basis from emerging markets. But why does the fund not invest directly in the asset class? “We looked at [emerging market companies] a couple of years ago but we did not find anything that would compensate us enough as a direct investor on a risk-adjusted basis.”

One of the funds in the top ten Lipper global equities sector, though, did have a significant amount of direct emerging-market holdings. Vontobel Asset Management, part of Swiss private bank Vontobel Group, had 20% invested directly in the sector through its Vontobel Fund Global Value Eq B product.

Rajiv Jain, the fund manager, acknowledges that emerging markets did not contribute much over the past year, though their contribution was not negative.

“There has been meaningful outperformance of the [MSCI World] index [over emerging market indices], but this has not had a negative impact on the fund despite it being disproportionately in emerging markets,” says Jain.

Does Vontobel’s emphatic allocation to the Global Emerging Market sector do something that investors in global equity funds would expect: make meaningful investments to a variety of countries and regions around the world? Is it right for a global equities fund to be under invested in certain parts of the world? “It’s nothing to do with countries, but everything to do with stock picking,” says Jain.

“When people invest globally, they want best-of-breed companies that the world has to offer them.”

Like other fund managers, Jain sees the “look through” opportunities that companies in the developed world offer in respect of emerging market growth. “Most people are long Germany because they think its economy means it will do better. I don’t care about that, but I do care about BMW and it is arguable whether BMW is a German company owing to its business in China.” 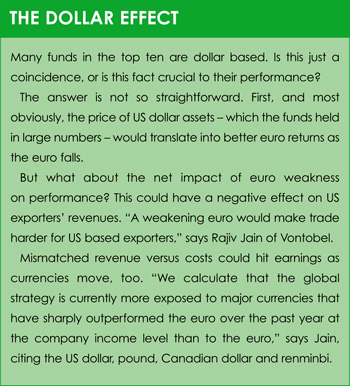 At one time, the fund had more in Brazil than in the eurozone combined. Until around four months ago, Brazil and India were 15% of the portfolio. But this has started to come down. Interestingly, as this allocation has fallen, Europe’s portion has increased – surprising even the banking sector. “We did not have any European banking exposure – we’ve not had any continental European banks for the last five years … [but] recently we have started putting a bit of European banks in the portfolio.”

By this he means UBS. Jain said he may add more European stocks “on the margins” going forward, though he does not expect much portfolio change.

At Invesco Perpetual, Doug McGraw is expecting to build up the fund’s emerging market exposure and will use a particular strategy to do this. The Invesco Global Equity Income A Acc USD fund, of which McGraw is a co-manager, falls just outside the top ten global equity performers and is in eleventh place with a 15.4% return, and under 1% in local currency terms.

Its Global Emerging Market holdings were zero at June 30, but like other managers, McGraw sees emerging market opportunities, particularly through diversified multinationals.

“We find a good way to get exposure to emerging market growth is through global diversified multinationals and the last time we ran our screening exercise, it was mostly Asian companies that came through strongly. In two weeks’ time, we will begin to prepare for meetings with those companies.”

The trick is to avoid Asian companies whose end users are in the West, like “Taiwanese tech companies assembling iPads for people in Missouri”.

McGraw had significantly more holdings in Europe than the top ten funds – 24% compared to an average for the top ten of 18.2%. Quantitative easing and the erosion to the value of the euro that has followed means McGraw is keeping a close eye on the currencies that European companies make their money in. Those whose costs and revenues are in euros – Sky Deutschland, for example – will require a euro hedge. For those with income in dollars, this is not the case.

US holdings for the top ten performers ranged from 36.3% to 99.4%. This compared against an average of 35.4% for US holdings among all of the 574 Luxembourg funds that had a one-year euro track record in the Lipper Global Equities sector.

Holdings of European and US companies remain high in the global equities world.But if you thought you were not getting your money’s worth from fund managers, remember that these figures belie the fact that emerging market-targeted investing is exerting a huge gravitational pull even in the mainstream of global equity strategies.