It has been a record year for custody assets following strong equity market performance. Increases of over 10% are not uncommon and very little now separates to largest two players. Well, if $100 billion is very little, finds Nick Fitzpatrick.

State Street has narrowed the lead, as measured by the value of custody and administration assets, that BNY Mellon has over it to the width of a hair – or $100 billion (€75 billion), which at the high end of global custody, is saying about the same thing. In dollar terms, State Street had $28.4 trillion of assets according to second quarter (Q2) company documents compared to rival BNY Mellon’s $28.5 trillion.

The $100 billion lead that BNY Mellon commands has shrunk from a $400 billion lead in the same quarter of the previous year and it comes as custodians report record custody assets after months of rising stock market values.

Nick Wright, chief operating officer for Europe, Middle East and Africa at State Street, says the company saw about $250 billion of new asset servicing wins in Q2, with 58% of them coming from outside the US.

Both BNY Mellon’s and State Street’s dollar figures in their Q2 results include assets under administration.

However, State Street gave us a euro figure for custody only: €15.89 trillion (see table). Rounded up, this places it in joint second with JP Morgan, which reports €15.9 trillion. (see table). JP Morgan did not indicate that this included administration, and nor does the bank’s Q2 earnings review, though its dollar figure in Q2 fillings, places it third globally with $21.7 trillion of custody assets.

Behind JP Morgan, Citi’s global assets under custody were $15.4 trillion, up from $13.4 trillion at the end of Q2 last year.

In euro terms, Citi’s assets amount to €11.2 trillion (conversion at June 30), while BNP Paribas, the largest non-American player, which has been ranked one place behind Citi for some years now, holds €6.9 trillion of assets under custody. 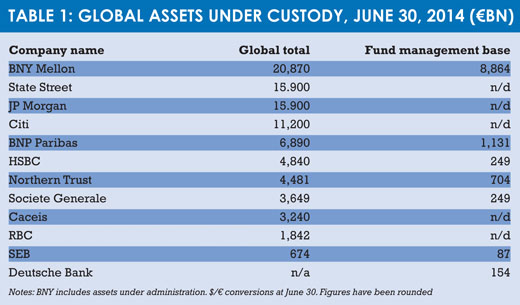 France’s BNP Paribas has seen a nearly 17% increase in its custody assets. Just above it in the rankings, Citi saw its assets increase nearly 15% in dollar terms, and just above Citi, JP Morgan saw a 14% increase.

DEPOSITARY COVERAGE
This year we asked custodians to tell us in which countries they hold a depositary licence for funds.

Despositary coverage has become a pressing issue since regulatory changes mean depositaries are liable for restituting investors’ lost assets. The banks need to demonstrate a robust model, regardless of what that model is.

BNP Paribas’s notable increase in custody assets comes at a time when the bank is energetically increasing its direct depositary coverage in a number of markets.

State Street, notable for catching up with BNY Mellon, has ten licences – three more than its rival. A spokeswoman says the company’s number of depositary licences has increased over the past few years. State Street has added the Netherlands to its coverage and due to a requirement from clients in the market as a result of the Alternative Investment Fund Managers Directive. The spokeswoman adds that Q2 new business wins included 26 alternative asset servicing mandates.

JP Morgan did not provide a list of countries in which it holds a depositary licence.

CUSTODY BONANZA
A first glance at assets under custody figures suggests a bonanza in the industry with banks reporting record assets largely on the back of increases in market valuations.

Does this mean the years of low revenues that were caused by the double-whammy of lower assets coupled with low interest rates (affecting interest revenue) is
now over?

“Unfortunately not,” says Jessica Hynes, a senior associate at Mercer Sentinel, a consultancy for investment operations. “Assets under custody uplift will increase ad valorum revenues, but the intense competition amongst the top banks to gain or, more importantly, retain clients has continued to drive down headline basis-point charges, even over the last five years.”

GROWING EXPENSES
The recent increase in market values does not replace the revenue lost from near-zero interest rates, tight foreign exchange spreads and a shallower pool of securities lenders, she says.

“Indeed, there is some concern that the custodian banks’ economic model is not generating sufficient revenue to meet their growing expenses, liabilities and regulations – yet they are still under pressure to reduce fees.”

She warns that fee increases may be forthcoming for the custodians’ smaller clients, though larger clients still have some bargaining power.. 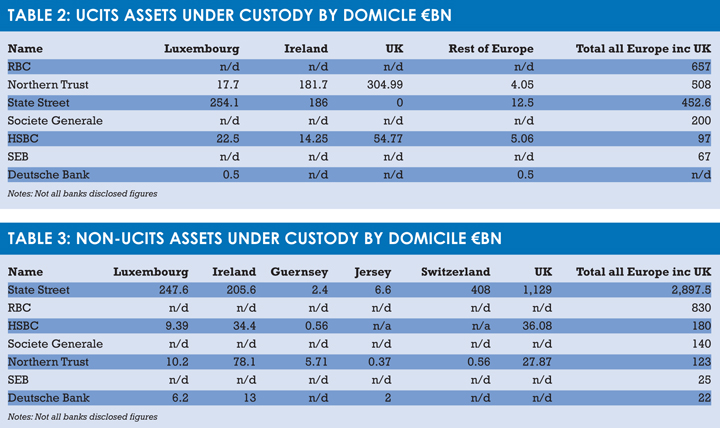 DMS, MontLake and MDO are now Waystone. They’ve come together for one simple reason – to help you navigate a complex and challenging environment with certainty.