Crushingly low yields have left some fixed income investors questioning the value of their asset class. George Mitton asks if emerging market debt could be the answer.

Stewart Cowley cheerfully admits to being a bond manager who doesn’t like bonds. Frustrated by the “horrific mathematics” on sovereign debt – where some investors are even accepting negative yields – he has chosen to short the bond market and trade derivatives.

It is a sign of the times that this negativity has been rewarded with huge inflows. His Old Mutual Global Strategic Bond Fund, which contained £35 million two and half years ago, now attracts a new £1 million (€1.2 million) a day.

But not everyone is as pessimistic as Cowley. Some investors say bonds issued by the likes of Mexico and Malaysia offer good value without too much risk. Could emerging market debt rescue bond investors?

Cowley’s scepticism is understandable, especially regarding the eurozone. Fear of a sovereign default is so high that the price of credit default swaps on most European bonds wipes out any value gained from holding the bond.

“Any of these countries like Italy and Greece, if they miss a heartbeat on any fundings, all hell lets loose,” he says.

US Treasuries and UK gilts are safer, but high investor demand alongside quantitative easing in both countries has depressed yields to historically low levels. This has increased the risk of holding long-dated bonds (see box).

Cowley is disillusioned with the whole market: “In the last two years we’ve gone from being a fundamentally long fund – we think that game effectively ended last quarter – to being opportunistic owners with a tendency to want to be short.”

The market shares some of Cowley’s pessimism. According to data firm EPFR Global, 2011 inflows into bond funds were down on the previous year in almost all categories. One of only two to increase inflows was inflation protected bonds, reflecting worries about increased inflation.

However, bond funds did attract net inflows of €110 billion overall in 2011, unlike equity funds which suffered €160 billion outflows, according to EPFR.

A profound pessimism about the bond market seems a logical position, yet some investors say this underestimates the value in a key asset class: emerging market bonds.

Jerome Booth, head of research at Ashmore Investment Management, is a self-confessed zealot when it comes to emerging markets. He points out that the market for these bonds is huge: about $11 trillion (€8 trillion) according to a survey by Merrill Lynch and the Bank of International Settlements. This is bigger than the market for UK gilts.

Proponents of the asset class expect greater returns in future as the emerging markets, which account for half the world’s economic activity, continue to develop. 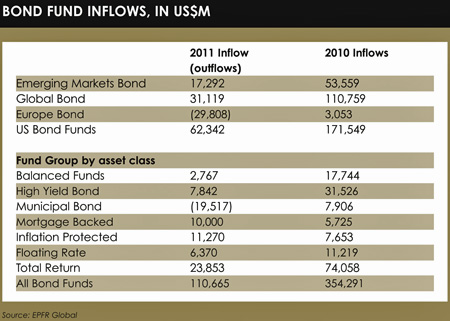 “The idea that there isn’t value in emerging debt beggars belief. These bonds don’t have anything like the default risk, devaluation or other problems associated with developed country bonds.”

But investors wanting to act on Booth’s advice face a hurdle. Rightly or wrongly, emerging market bonds are widely viewed as a risky asset, and in the current climate, when large institutional investors are playing a game of risk-on, risk-off, these investments are vulnerable to sharp and painful sell-offs that can eradicate value.

Last summer, when emerging market bonds were performing well, there was brief optimism that the emerging economies had decoupled from the flagging western world and that their bonds had become “the new Teflon”, to which nothing bad sticks. But that ended with a sell-off in September.

“The decoupling story and the Teflon story isn’t quite true,” he says. “If growth is slower, liquidity is less available and these risk assets do underperform.”

Brain, who does not share the pessimism of Cowley, is long on some emerging markets, but cautious on the asset class as a whole. He likes Mexico because it is a satellite of the United States, where growth is looking comparatively strong, and he believes the peso is undervalued. At the time of writing, he is invested in some Asian bonds, such as Malaysia’s, but wary of liquidity problems that would make these bonds hard to sell.

Brain has another strategy for overcoming low yields in government bonds. With a flexible mandate, the fund can switch between sovereign bonds and corporate credit at will. 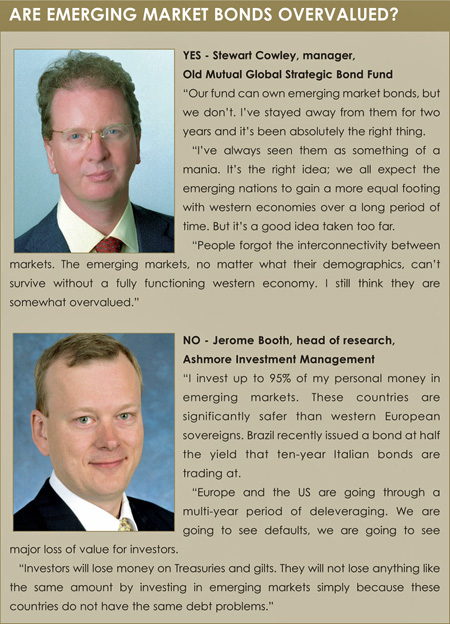 “There are times, like last year and 2008, when the only place to be is in government bonds. But then you get a 2009-2010 experience when [corporate] credit does extremely well and you want to be able to switch from one to the other,” he says. “If you keep doing that over a two to three-year horizon, you’ll consistently outperform a lot of bond indices.”

Corporate credit has suffered, like emerging market bonds, from being viewed as a risky asset, and has been subject to periodic sell-offs in the past year. But proponents of the asset class say corporate balance sheets are generally in better shape than most western governments’.

PSigma Investment Management is predicting returns of 8% this year in parts of the corporate debt market.

But Cowley, the bond manager who doesn’t like bonds, will take a different route. “To manage the fund, we’ve gone more and more to the derivatives markets.

We use futures [and] combinations of options. We’ve put derivatives structures around the fund, costless collars where we sell call options and buy puts with the proceeds. We’ve used credit default swaps on corporate bond indices.

“More and more, we’ve gone to the derivatives markets to find that liquidity. It’s a big change in my career.”