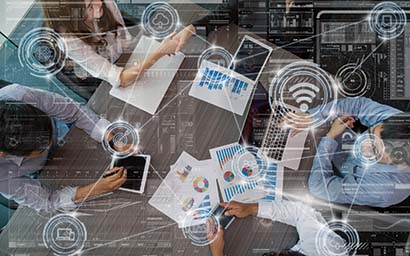 AMX was named Innovator of the Year at the Funds Europe Awards 2018. Its chief technology officer, Bill Jooste, talks to Nicholas Pratt.

Innovator of the year is one of the newest and most controversial categories at the annual Funds Europe Awards. In its inaugural year, the judges decided not to appoint a winner, deeming that the entrants were just not sufficiently innovative. This was not so much an indictment of the individual entrants, but of the industry itself. Where, the judges wondered, were the truly disruptive and revolutionary newcomers?

This year’s award went to the Asset Management Exchange (AMX), a global marketplace aimed at the institutional investment market. Investment consultant Willis Towers Watson launched the project in February 2017 armed with $750 million (€660 million) of delegated hedge fund assets and the lofty ambition of fundamentally transforming the industry for the benefit of the end saver.

In essence, the platform aims to provide asset owners with centralised access to asset managers using a standardised fund infrastructure. The idea is that it offers cost savings and convenience to both the investors and the managers.

“It was our observation that there was a lot of duplication in the market,” says Bill Jooste, chief technology officer at AMX. “There are a lot of point-to-point relationships and investors have to set up relationships with multiple asset managers.

For example, there are managed account platforms that provide comprehensive services but are client-specific and focused on hedge funds. Or else there are the fund platforms that act more like a switchboard than a genuine exchange in that they do not address the reporting, operational costs and governance issues, Jooste contends.

By contrast, he says, AMX has set up its own fund structure and it appoints both the manager and the custodian, leaving the appointed manager to focus solely on the investment process. “We are trying to ensure that AMX works for managers as well as investors.”

It is not the first time that someone has tried to establish an exchange model for what is essentially a bilateral market. For example, the foreign exchange market has attempted the feat many times with limited success and the issue has also arisen in the burgeoning cryptocurrency world where the transparency of a centralised marketplace may offer some relative respectability.

Ambition and scale
So, what makes AMX the exception? If it were down to ambition alone, its success would be assured. It is built on open architecture so that it can potentially be shared across the market and create a single global utility. It is also aiming to be multi-asset to provide a wider range of managers to investors.

Scale will of course be key to the future success of AMX. The aim is to accrue more than $100 billion in assets. Since launch, it has gathered $6.6 billion and, says Jooste, it is aiming to double that by the end of 2019.

Establishing and running AMX is an investment-intensive process, he adds. “We run our own fund structure, which requires substance and operational oversight, and we take on due diligence of managers, so there is significant infrastructure involved.

“We also take on the fund accounting, subscriptions and redemptions and client reporting. Regulation is also a focus for us – we are all grappling with the same rules, so one of the benefits of an exchange-based approach is that it reduces that regulatory burden.”

Providing that benefit does involve considerable investment in operations and systems, though, says Jooste. “There is no off-the-shelf software for this. We had to build it and recruit people and that takes a lot of commitment and investment.”

One of the principles behind AMX is that the retail experience is no different to the institutional world. “There is an inherent assumption that they are different. I would argue that this is wrong and is a source of frustration for many institutional investors.”

Feedback from investors on AMX has been positive, he says, and has validated the belief that there is a demand for an exchange model that reduces cost and increases transparency.

He has also been surprised by the involvement of large institutional investors.

“I thought it would mostly appeal to the small and medium pension funds. But we have actually seen large pension funds see the benefit because they can see bigger benefits in terms of cost . We have been quite investor-led and now we are seeing more managers get involved. They can see the market moving in this direction, even if it has been slow.”

Dominance
Another challenge for any new platform aiming to become an industry utility is its ownership. AMX is owned by Willis Towers Watson, one of the industry’s largest global consultants, as opposed to a consortium of market participants or a public-sector, not-for-profit body specifically designed to run such a utility.

But Jooste does not think this will inhibit AMX’s ambitions to become a dominant exchange. “I am confident that we have structured our governance in a way that means that independence is not an issue. We have been encouraged by Willis Towers Watson to use and develop our own brand. If we were a small start-up, we would struggle to make that investment and I think a large parent gives some comfort.”

Does AMX adhere to the idea that true innovation means reinventing processes, as opposed to applying new technology to the same old processes? “We think it is an innovative concept. We don’t have a legacy system and we don’t have to bolt on solutions. That is an advantage,” says Jooste.

“And we have built an experienced team of over 70 people from both sides of the industry – the pension funds and the asset managers. They all see an opportunity to be a part of something new and to create a different process and culture.”